Precious metals periodically suffer from coordinated bear raids as the commercial shorts try to level their books. That appeared to be the case in recent weeks when the gold price was sold down from $1345 to $1280 last Friday. WTI crude was also sold down through the psychologically important $100 level to under $98. The weakness of energy prices and some of the base metals was the only question mark over an otherwise positive news background for gold and silver.

This week gold enjoyed a sharp recovery from the bear raid, which is illustrated in our first chart. 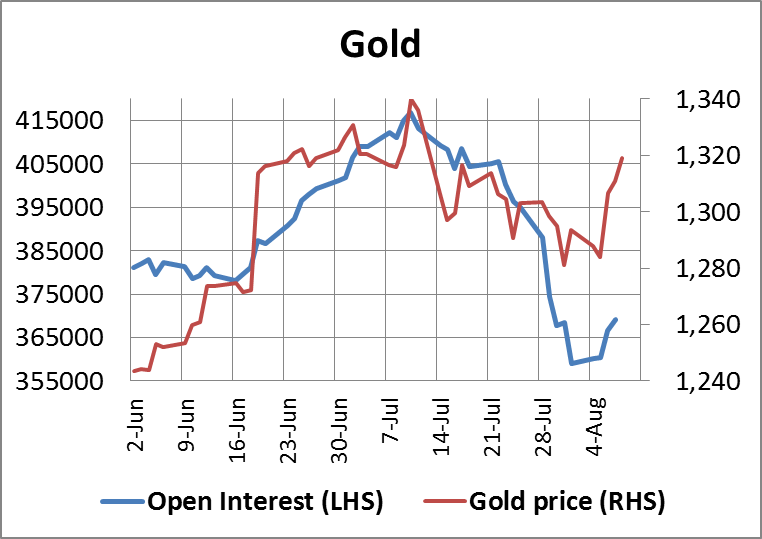 In shaking out weak holders, Comex open interest collapsed spectacularly to as low as 358,996 contracts on 1st August, the lowest level since May 2009. We won't be able to estimate how much specific categories of commercials were still short on that date until the Commitment of Traders report for last Tuesday is released later tonight; but the indications are swaps, mostly non-US bullion banks, still have collective short positions on the high side.

This is important, because the remaining bulls are obviously resolute, indicated by the sharp upturn in open interest on an equally sharp price gain to $1320 this morning. The signs elsewhere are not good for the shorts either, with physical demand in London appearing to have caught that market on the hop as well. In conclusion, it won't take much to squeeze the remaining shorts and drive the price materially higher.

The silver price has suffered this week. While gold rose 2.3% in a developing bear squeeze, silver actually fell by about 2%. This diverse performance is extremely unusual, and as can be seen in the chart below, silver's open interest has contracted significantly, with only a relatively muted recovery in the last few days. 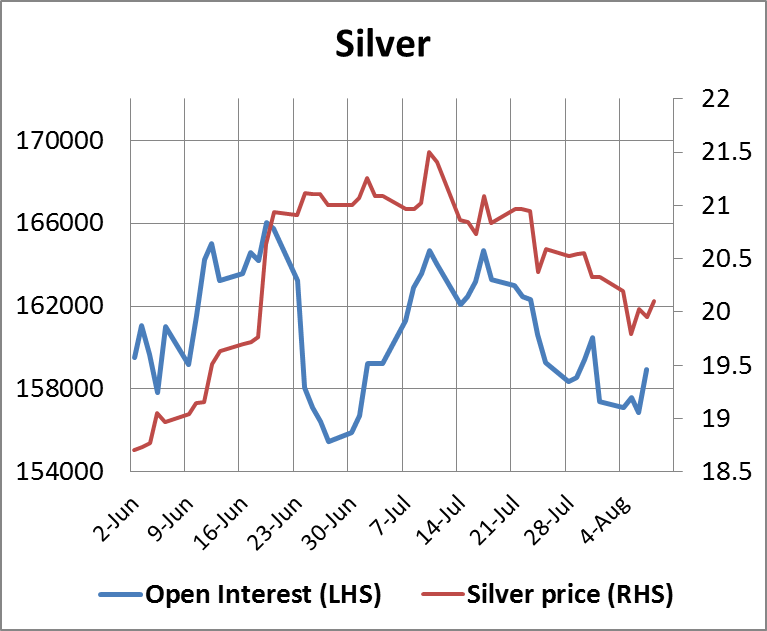 There are strong signs the bear raid is now over. Firstly, open interest is approaching the late-June lows, from which a 15% rally in the price developed, as shown in the chart. This indicates that virtually all the weak bulls have sold or been stopped out, and so the swaps which are still short now risk being squeezed themselves. Secondly, on this low level of open interest there was exceptional volume on Tuesday when the price turned, and also very good volume on Wednesday, when the bears tried unsuccessfully to push the price lower still. Collectively this market information clearly indicates that the odds now favour a strong rally in the silver price.

Developing conditions between NATO and Russia over the Ukraine could well trigger or exacerbate bear squeeze conditions next week. Energy markets have yet to reflect these uncertainties, as well as the deteriorating situation in Northern Iraq.