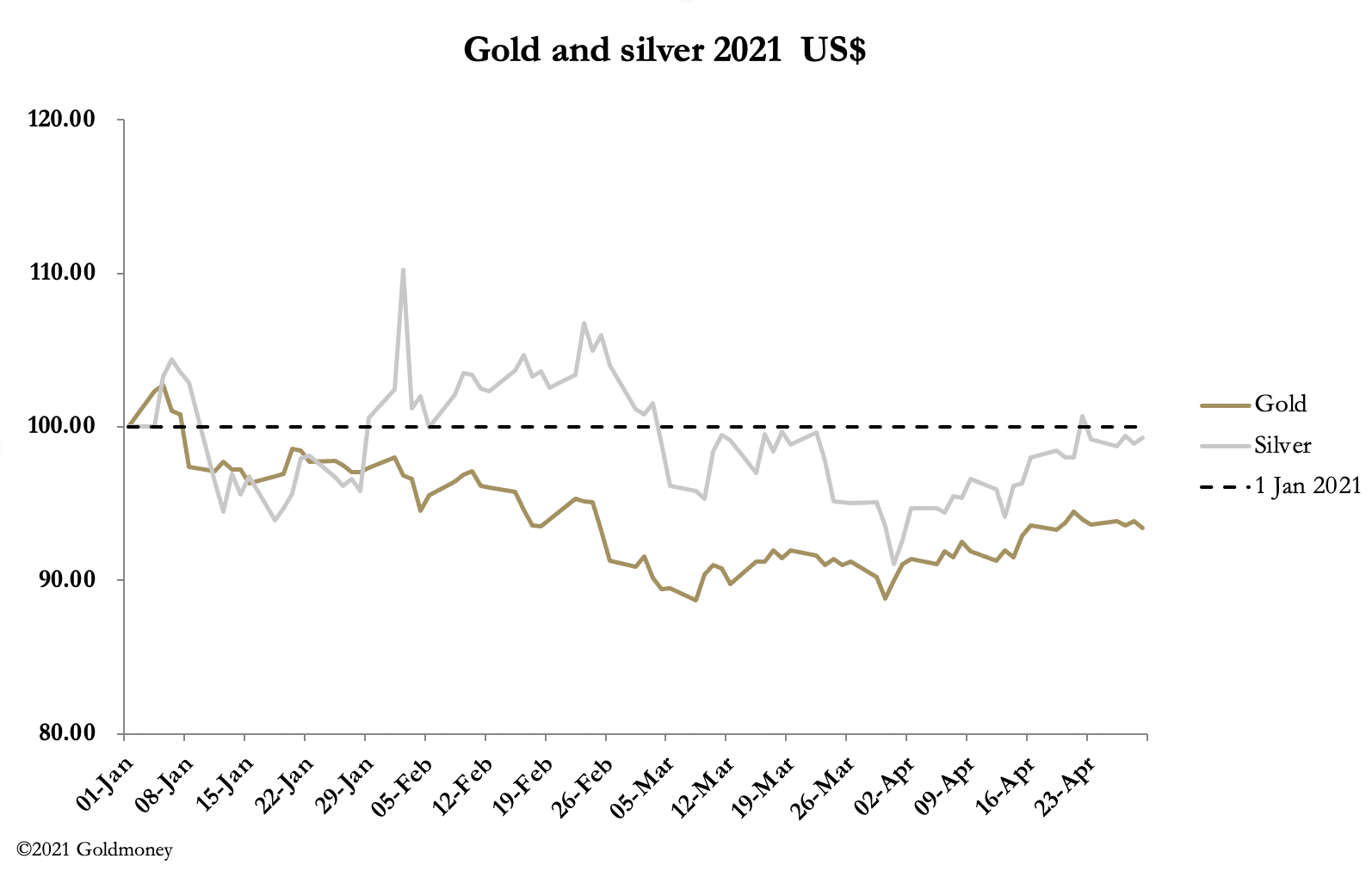 Gold and silver were little changed on the week, with gold at $1769, down $8 from last Friday’s close in early morning European trade, while silver was at $25.95, down 4 cents. The last trade date for Comex gold and silver May futures was on Wednesday, with the silver contract being “active”.

While appearing to be becalmed, gold and silver pricing has become surreal. You would think that with President Biden’s plans going full MMT that financial markets would respond with higher gold prices, reflecting the tsunami of inflationary money supply to pay for it, and that the dollar’s trade weighted index would fall. After decades of increasing interest rate suppression and growing intervention in bond and other markets through QE, the obvious conclusion is that markets have ceased to function as they should, and prices can no longer be regarded as economic signals.

So far, President Biden is committed to roughly $6 trillion of government spending, additional to that already mandated to government of some $3.5 trillion annually. The $2.3 trillion of planned infrastructure spending will be over several years, but nonetheless it is no exaggeration to say his plans seem set to sink the dollar in terms of its purchasing power. We see this already with commodities: copper rose to over $10,000 per tonne this week, for the first time in ten years, and virtually the whole commodity complex, including raw materials and agriproducts has risen substantially in price since the Fed accelerated its QE from March 2020.

Another way to describe this phenomenon is that the dollar’s purchasing power in commodities has fallen. That being the case, the dollar is taking gold down with it, which is somewhat bizarre. The explanation, of course, is that paper markets, which dominate trading, are suppressing the price. But this leads to tight physical markets, which were reported earlier this year with the US Mint saying it was unable to meet surging demand for gold and silver coins (Reuters — 2 February). This was further confirmed by a GATA post only yesterday, which reported former US Mint Director Ed Moy as admitting supplies are still tight.

It therefore behoves gold and silver bulls to be patient while all these paper-induced distortions resolve themselves. Apart from Biden’s dollar-destructive spending plans, some comfort comes from the dollars TWI, which is shown in the chart below. 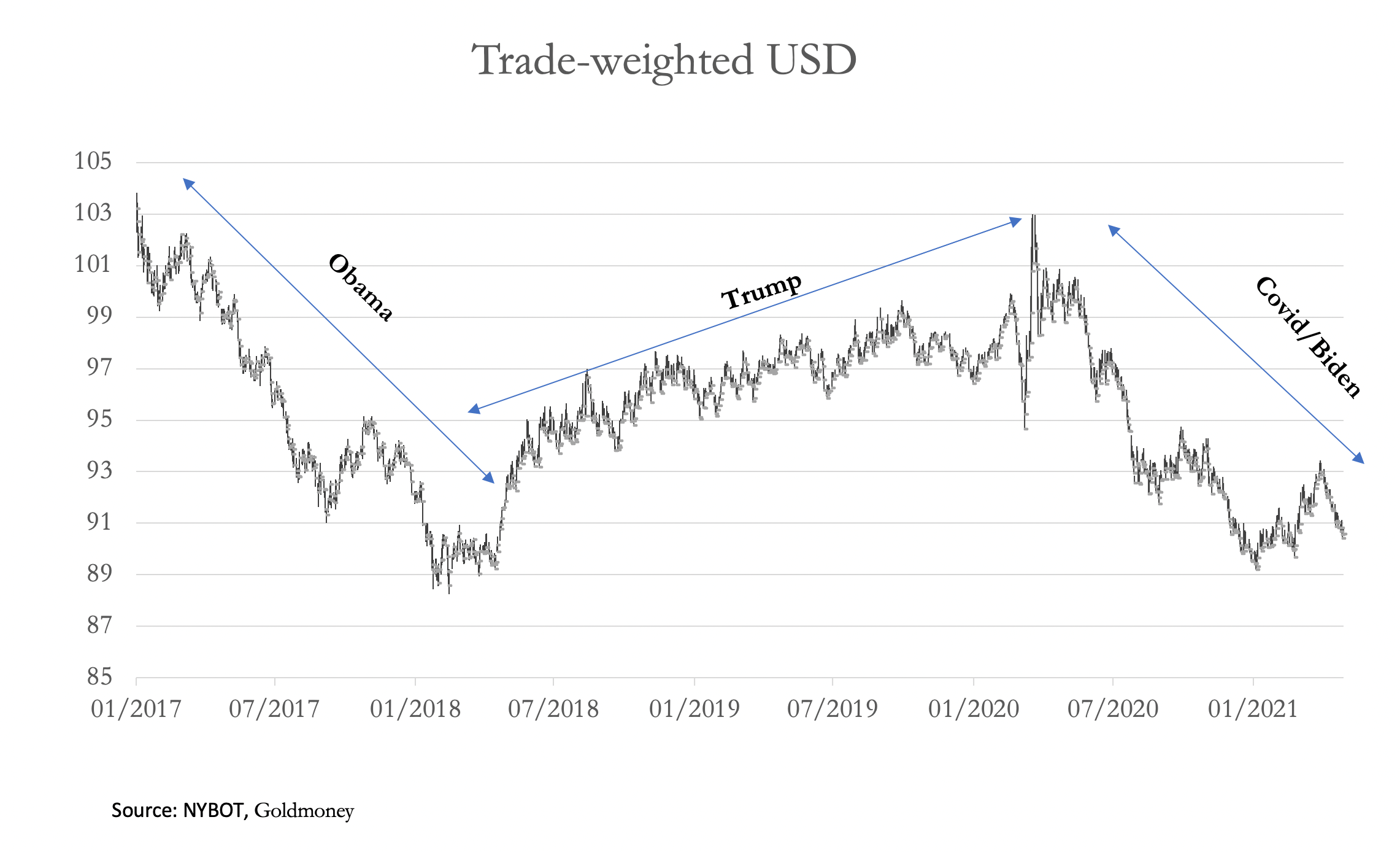 The bear market for the dollar’s TWI is well established, and it appears to be only time before major support at 89 is breached. And when it is, the chart is saying to watch out for a major fall.

Gold and silver have been consolidating for nine months since their record prices last August, taking their valuation relative to the increase in money supply plus bank reserves (Fiat Money Quantity) since the month Lehman failed towards new lows, as shown in our last chart. 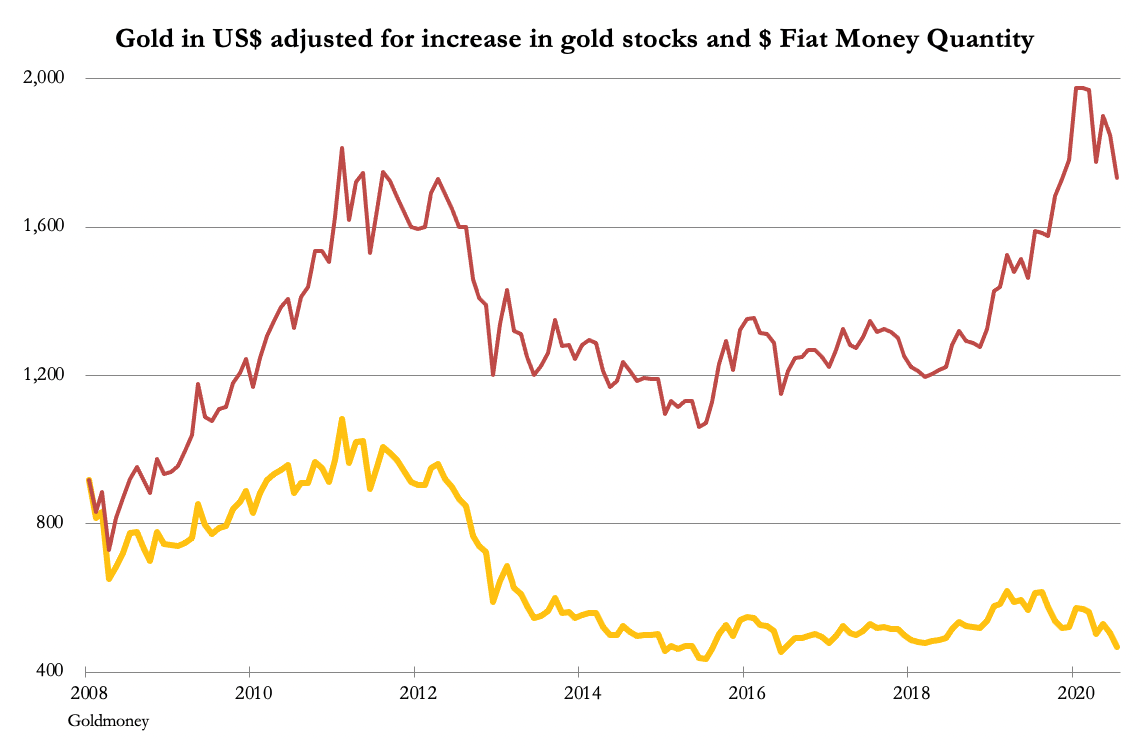 In other words, adjusted for the massive increase in dollar money, in real terms gold has halved since the Lehman crisis.