Gold drifted lower this week, with the price undermined by lack of interest on low volume and a slightly more hawkish tone in the FOMC minutes released on Wednesday. The chart below, of gold and open interest on Comex, shows how the price has declined while open interest has hardly budged from its historically low level. 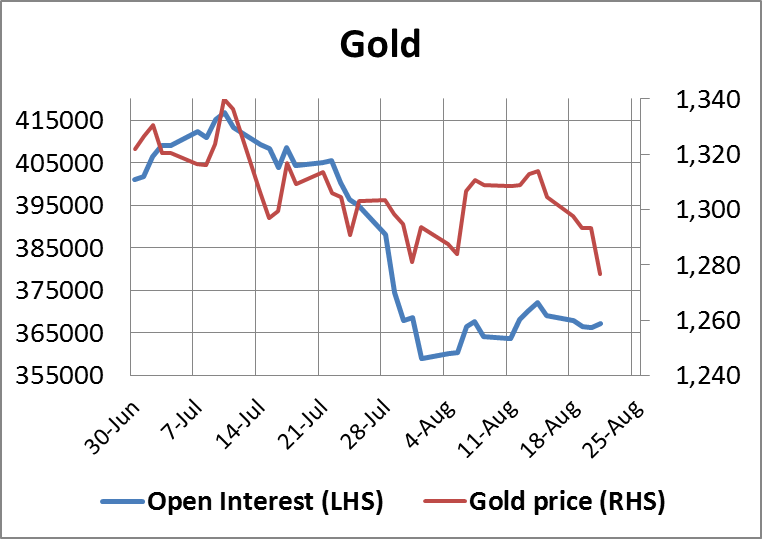 The underlying factor has been dollar strength rather than gold's weakness. Since last Friday the dollar has risen nearly 1% against the euro and pound and 1½% against the yen; so a 2% fall for gold against the dollar is not a big deal. Furthermore oil prices have fallen this week with US crude down nearly 2%.

The dollar's strength was fuelled by the FOMC's minutes, which recognise that the improvement in the labour market has been somewhat better than expected. Even though the Committee downgraded its expectations for GDP growth slightly, analysts view the improvement in unemployment numbers as more important. Sterling had been benefiting recently from the same story until Mark Carney at the BoE seized upon the fall in average earnings cum-bonuses as an excuse to defuse expectations of an early rise in interest rates.

Whatever the hawks say, central bankers are unlikely to bring forward an increase in interest rates until price inflation rises towards mandated targets. At the moment it is trending the other way. Janet Yellen is due to speak at the Jackson Hole meeting later today, and it is thought likely that she will dampen down speculation on this topic. Both Carney and Yellen have a delicate problem: an improving economy will lead to higher interest rates and therefore losses in bonds with adverse consequences for those banks which are heavily invested; alternatively a declining economy will also hit the banks as bad debts rise. Therefor it is natural for them to keep rates as they are for as long as possible.

In other gold news, Russia's central bank announced the acquisition of a further 300,000 ounces of gold, taking their holding to over 1,100 tonnes. This is double the amount of previous purchases, and should raise the question as to why Russia has accelerated her purchases.

Silver is behaving somewhat differently. While gold was down over 1% yesterday, silver closed unchanged. This relative strength suggests there is an underlying shortage of physical, and a price premium of about 7% in Shanghai confirms it. Open interest on Comex is also rising on every price fall and it now stands at the highest level since February 2008, shown in the chart below. 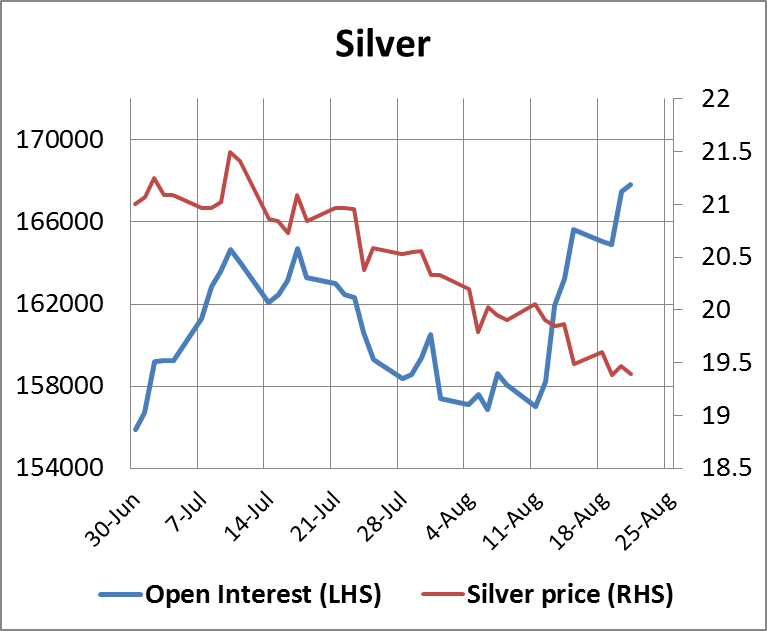 A significant divergence between open interest and price usually signals a market turn. In this case it appears that users of the metal are taking the opportunity to lock in ultra-low prices. Speculators are likely to return as buyers at the first sign of dollar weakness/gold strength, so the silver price should then rally strongly.

This morning with the dollar slightly easier precious metals opened in Europe on a firmer note, awaiting Yellen's speech at Jackson Hole.