Currency wars have intensified this week driving the US dollar sharply higher against the euro, yen and pound.

Minor currencies are also deliberately devaluing against the world's reserve currency. According to Zerohedge, 21 central banks have cut interest rates since 1st January. The signal this sends out is that people everywhere appear to be showing an increasing preference for money over goods, commonly associated with deflation. 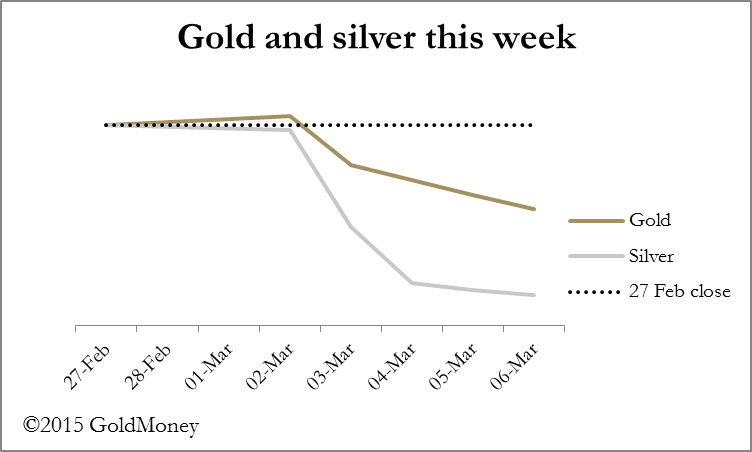 Precious metals have been pinned down in the cross-fire. At the root of this currency war is a strong dollar, contributing to weak commodity prices, and since western analysts are generally uncertain of the role of precious metals in modern financial markets, they see no reason to recommend buying gold and silver. Over the week the gold price fell over 1% to $1196 by early-morning trading in London today, and silver by 2.5% to $16.12. However, the detail in market action suggests physical demand continues to be reasonably strong on falling dollar prices, and westerners are still emptying their vaults to supply it.

We shall have to wait until next week to find out how much of this buying was Chinese demand, but we do know now that it fell off a cliff over Chinese New Year, with Shanghai Gold Exchange deliveries down to 37.9 tonnes for the two weeks to 27th February (recently it has averaged about 60 tonnes a week). It will be interesting to find out in due course whether or not Russia's and other Asian central banks have taken advantage of this lull in Chinese demand to increase their monetary reserves.

The price of gold in US dollars has now been weak since mid-January when it peaked at $1307, having subsequently fallen over $110 in the following five weeks, retracing two-thirds of the rise from the first week of November and now testing support at the $1200 level. The severity of this fall measured in dollars means that the gold price has also fallen measured in the other major currencies; but it is worth noting that gold is still up a net 18.75% in euros and 12.3% in yen since that bear-market low. In sterling, gold is up a net 10% (similar to the USD) and gold in these three currencies is shown in the chart below, rebased to 31st October. 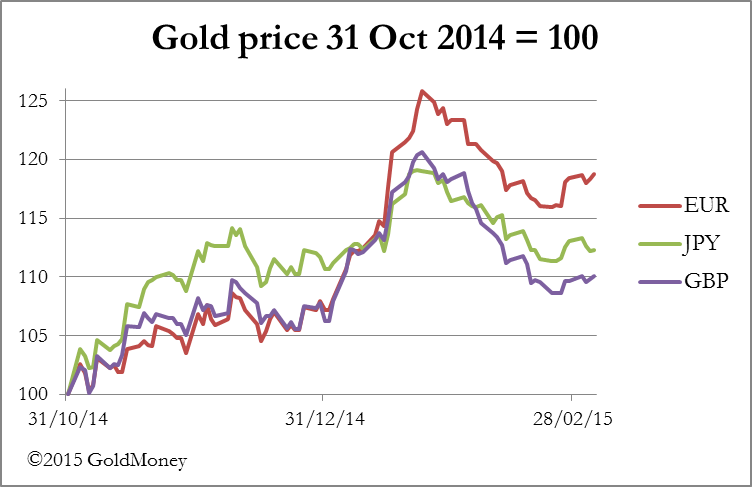 Yesterday Mario Draghi announced that the European Central Bank's (ECB) QE programme of monthly purchases of €60bn in public and private sector securities would start on Monday. If there are insufficient public sector securities available, substitute purchases will be made. Despite the stated intention for these purchases to be market neutral, they are bound to restrict liquidity and drive bond yields even lower than they are today. From an investment point of view the ECB's announcement should also be a positive factor for precious metals as Eurozone residents can expect the euro to weaken and find the interest cost of holding gold and silver diminishes still further.

Global monetary inflation is about to ratchet up another gear.