Almost unnoticed, Open Interest in gold futures has taken off spectacularly, increasing by over 35,000 contracts since the beginning of the month, which is shown in the following chart. 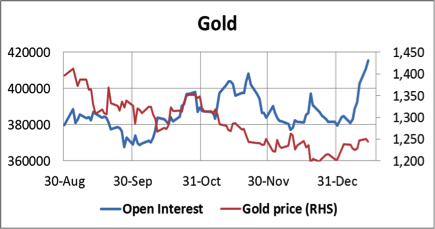 As a general rule of thumb, an increase in Open Interest on a rising gold price is bullish, indicating the bulls are back in charge. The pick-up in silver's open interest is not so marked because it starts from a higher base.

Here the pattern is somewhat different from that of gold, with open interest having already risen sharply on the falling price three months ago and remaining elevated ever since. In this case, the bulls appear to have held their nerve during a very bad time for the silver price, which is a sign that the bears never actually gained control.

Furthermore the bullion banks in silver appear to be getting nervous. On a number of recent occasions in quiet trade silver has been marked down with little or no corresponding move in gold, only to fully recover in the absence of selling. This pattern is consistent with market-makers (a.k.a. the bullion banks) trying to close their shorts, but there is not the liquidity for them to do so. The next chart, of the four largest traders' net position says it all. 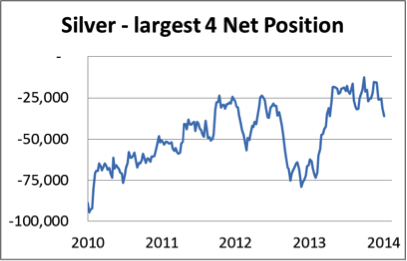 Note how in 2013 these bullion banks covered 60,000 net shorts, amounting to 300,000,000 ounces, only to see this hard-won ground begin to slip away from them in recent weeks. The second largest four are suffering the same fate, having got their net shorts down to as little as 475 contracts in early November, only to see the position deteriorate to 13,777 last week, This is a big exposure for these smaller traders.

Money Managers have closed some of their silver shorts but are still exposed at three times their average. The squeeze in the market might also have something to do with commercial businesses locking in low prices for physical silver into the fourth quarter of 2013, with no matching increase in hedging by the mines. So if there is a short-term crisis developing in precious metals, it could well be in silver.

Turning to economic developments over the last week, there has been growing hope expressed that economic recovery is on its way in the UK and to a degree in the US. While the talking heads have been promoting equities and talking glibly about future economic prospects, the statistics suggest a very bumpy road. Most discouraging perhaps is the Baltic Dry Index, which is a pretty good indicator of global commercial activity: this has been in freefall since mid-December, when it dropped from 2,330 to 1,374 earlier this week.