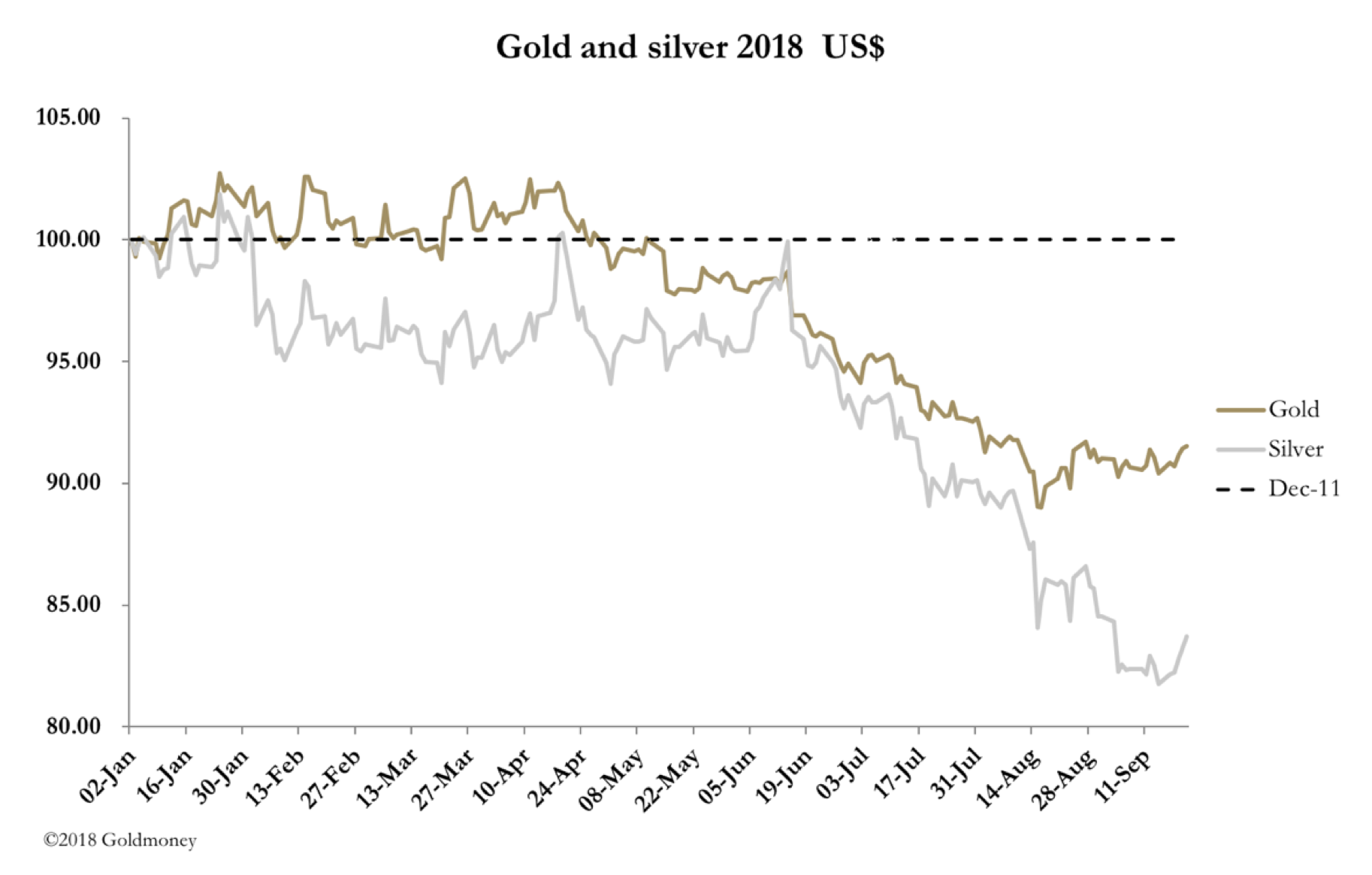 The rally from recent lows continued, with gold up $14 from last Friday’s close in mid-morning European trade today (Friday) at $1208. Over the same timescale, silver gained 34 cents to $14.40. Both metals remain extremely oversold, with no signs of panic in the ursine community - yet. The next chart shows the net managed money position for gold on Comex. 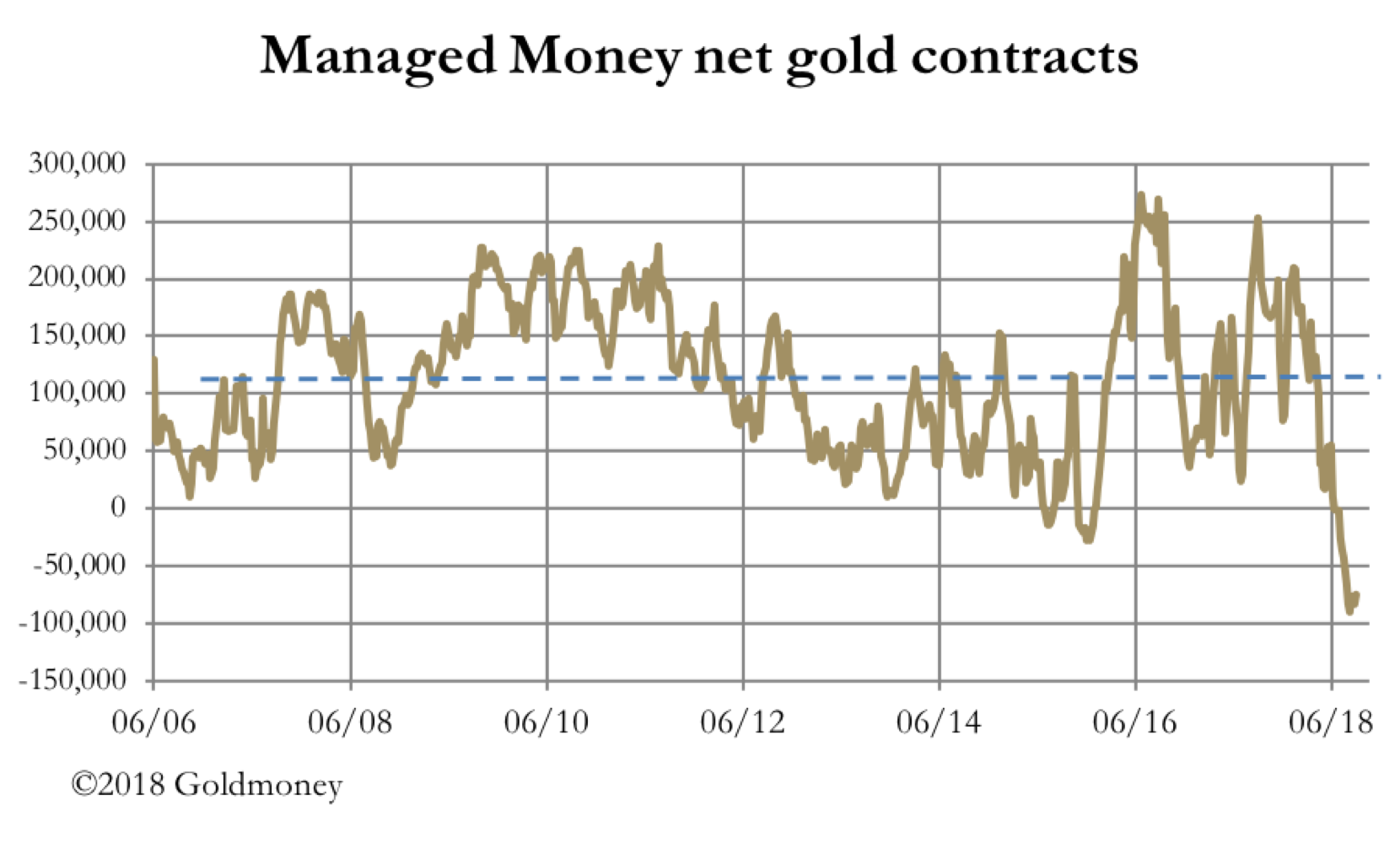 At net short 75,000 contracts, this is an inversion of futures market theory. The purpose of futures is to allow producers to sell production forward to lock in today’s prices. The buyers are meant to be speculators who take on the time risk producers seek to hedge. This is why speculators are normally net long, and the pecked line shows the average position at 111,000 contracts. The current market is at an extreme, and it is inconceivable that it can get materially more oversold.

Gold has in fact rallied $47 from its lowest point on 16th August, since when the oversold position has barely changed. The October contract has nearly rolled off the board into December, and open interest is unchanged.

Therefore, losses for the bears must be beginning to mount. Presumably, they remain convinced the dollar is still on the up, there being no reason to panic. But things are beginning to look not so good in dollar-land, as the next chart of the trade-weighted dollar shows. 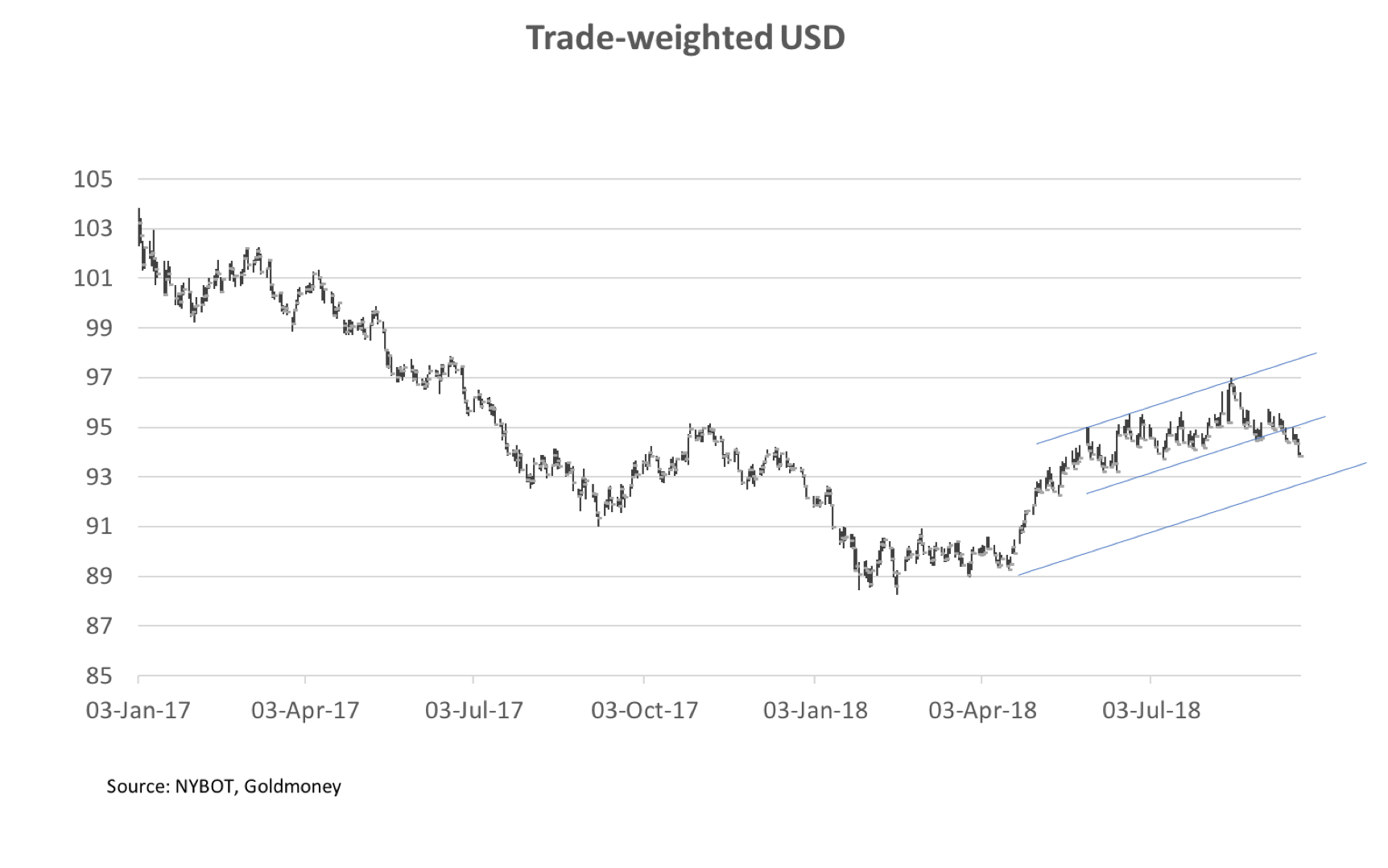 The index has broken down out of a mini-channel delineating what appears to be a weak top formation, and as a starting point appears headed to test the lower bound of a more significant channel at 93. That is roughly 1% below the current level (93.90). If the 92-93 level gives way, there will be little doubt the dollar will be in for a further fall, initially testing 89.

There are a number of factors that make this outcome look increasingly likely. The Fed is expected to increase its Fed Funds Rate at the end of the month (98% probability). If it does so, it will be breaking with convention, which is not to raise interest rates ahead of the mid-term elections, for fear of being accused of influencing the outcome. There is therefore a strong argument that says any such rise should be deferred for two months.

With price inflation rising that would be a significant delay. However, it is almost certain that both the ECB, the Bank of Japan and the Bank of England will be applying pressure on the Fed to delay, because they are already out of line with their own rates.

It will be a tough call, but if the Fed raises rates next week, there is likely to be some profit taking in the dollar, because it is widely expected. This might generate a little bear-closing in gold and silver. If there is no increase, then the dollar should fall more sharply, and a decent bear squeeze in precious metals will be almost certain.

For traders, the important level for gold is the $1210-15 level. If gold succeeds in breaking above that, we can look forward to fireworks.