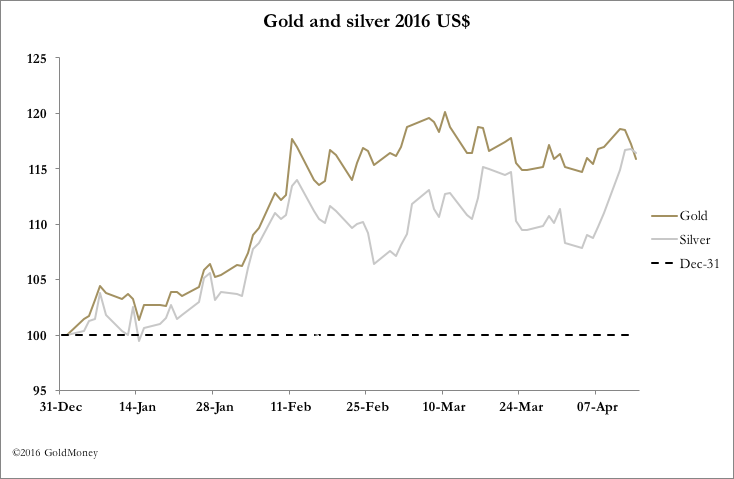 The gold price rose strongly on Monday and Tuesday, before drifting lower on Wednesday and Thursday.

In early European trading this morning, gold opened slightly stronger at $1230, up $2. Silver was the star performer this week, rising strongly to correct this year’s underperformance, as shown in our headline chart, and it broadly held its ground while gold lost about $30 from this week’s highs.

Silver’s strength in recent days is an illustration of how the mixture of regulated futures, forwards, and over-the-counter instruments creates analytical difficulties. The only reliable trading figures we have are from the CFTC’s Commitment of Traders Reports, issued after a delay of three days. Those indicate silver is very overbought, with hedge funds holding near-record net longs. Yet silver’s outperformance has the clear characteristics of a bear squeeze. What is hidden from us are the off-market deals in physical, OTC and forwards, which on the basis of silver’s performance this week, indicates an overall shortage exists despite being overbought on Comex.

A possible answer came yesterday, when it was announced that Deutsche Bank admitted to silver manipulation and agreed to implicate the other banks. Could it be that those in the know, or to-be-alleged fellow conspirators, decided to close their bears? It later transpired that Deutsche has also admitted rigging the gold market. That had no immediate effect on the gold price, but then gold is a far more liquid market.

Deutsche appears to be trying to put the past behind it. Gone are the days when it participated in both the gold and silver fixes, but the paper trails should still exist. The potential implications could be very serious indeed, and almost certainly will involve the London market and the LBMA.

There are signs of considerable stress building in the shadow banking system, which may be leading to synthetic positions in precious metals being wound down. Shadow banks are financial intermediaries which facilitate these paper transactions, and if they are forced to curtail their activities, the ability of traders to deal in markets is reduced in turn.

These traders tend to run a short book overall, so their ability to finance short positions is likely to be restricted. That being the case, trading in physical metal should begin to determine prices to a greater extent. Market liquidity in derivatives is bound to suffer.

The principal counterpart driving the gold price this week has been dollar weakness followed by dollar strength. While these fluctuations are always a feature of price progression, underlying demand for physical metal appears robust. Negative interest rates in the Eurozone must be having an effect, and if European demand continues to build it will be a new bullish factor.The stronger euro and yen certainly make gold attractive to Europeans and Japanese, as the next chart shows. 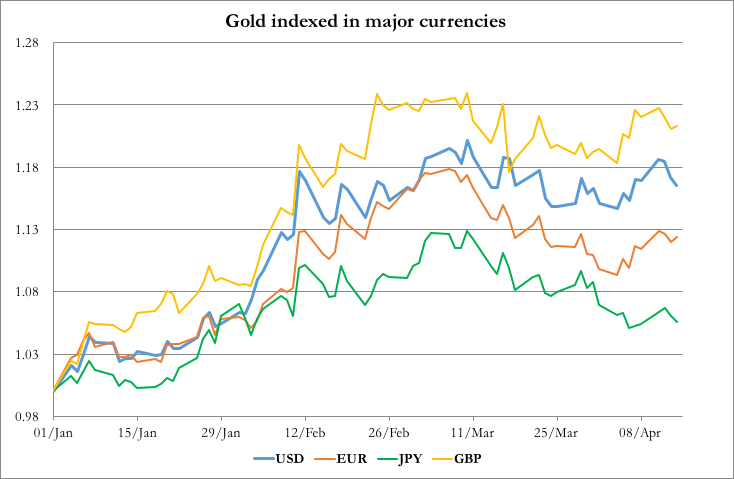 Elsewhere, Chinese demand in the first quarter was 516 tonnes, running below the comparable period in 2014, which was 625 tonnes. The Indian jewellery industry was on strike from the beginning of March until this week, protesting against a proposed 1% government levy on non-silver jewellery. The relative decline in Asian gold demand, compared with last year, may be compensated for by other buyers, but Indian demand should pick up again now the jewellers are back at work.