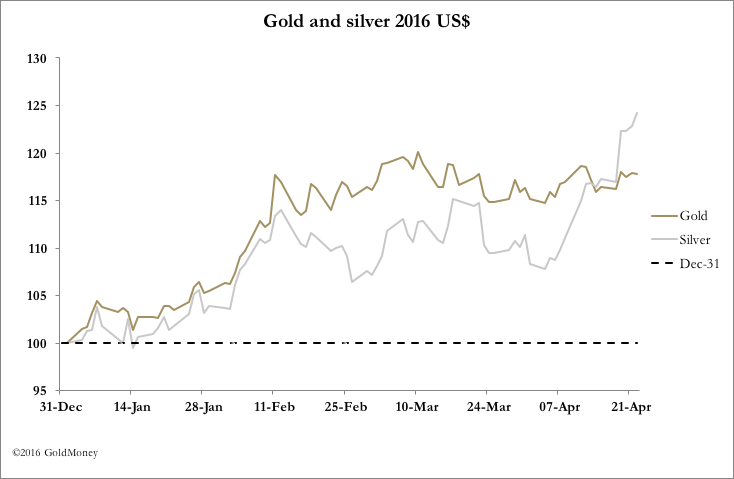 Silver continued its stellar run this week, trading as high as $17.60 overnight in Asia on Thursday morning, and in mid-morning European trade today was 24.3% on the year, overtaking gold.

Gold finally caught a bid yesterday as well, running up as far as $1261 at the same time. Both metals opened strongly in US trading yesterday, with gold running up further still to $1270 and silver to $17.70, before someone dumped about 8,000 gold contracts and 3,750 silver contracts on Comex, driving prices down to $1250 and $17 respectively.

Preliminary Comex open interest figures for gold yesterday increased by 8,562 contracts on a net down day. This reflects the new bear sale described above, and is not symptomatic of profit-taking. At the same time there was an exchange of 9,251 June contracts for physical recorded. Could it be tied into an arbitrage into the new yuan contract, which requires the maintenance and delivery of physical metal in Shanghai?

Most likely, not. This is the first week of the Shanghai Gold Exchange’s yuan-denominated gold fix, which commenced on Tuesday. The price is fixed twice daily, morning and afternoon, priced in yuan per gram. There are thirteen fixing members, and six reference price members, of which the only foreign banks are Standard Chartered and ANZ. Any US bank dealing at the yuan fix will have to go through the fixing members.

Developments in Shanghai are for future consideration. In current markets, private sector physical demand in China has tailed off slightly, and a gold processing and jewellery strike (now just ended) had paralysed the Indian market. So overall demand for gold could have fallen significantly on these factors alone. However, there has undoubtedly been an offsetting increase in European demand, fuelled by negative interest rates.

The ECB yesterday announced no change in interest rates or to the €90bn monthly QE, though there was some currency volatility after the announcement.

But there is another factor, which may have had a more important market impact. Saudi Arabia appears to be in financial difficulties, stemming from last year’s collapse in the oil price and the sharp rise in state spending in recent years. Saudi Arabia is also fighting a proxy war against Iran in the Yemen, so is not surprising that Iran refused to attend the OPEC meeting in Doha this week, increasing the financial pressure on Saudi Arabia.

Saudi Arabia has two types of financial reserves, US Treasuries and gold. The rumours that she would sell USTs were very strong this week, and there have also been rumours in recent months that she has been selling bullion. That being the case, there was potential for China to lend Saudi Arabia yuan against future oil sales, perhaps as part of a package including the purchase of some gold. Saudi also announced a $10bn five-year loan, the first time it has entered credit markets for a very long time. This loan would have eased her immediate liquidity problems, given that any loan from China may take longer to put in place, and may involve time restrictions on selling yuan.

If Saudi Arabian sales of gold have come to an end, it might explain some of the recent strength in the gold price. It will be interesting to see if this is confirmed by price action in the bullion markets in the coming weeks.


The views and opinions expressed in the article are those of the author and do not necessarily reflect those of GoldMoney, unless expressly stated. Please note that neither GoldMoney nor any of its representatives provide financial, legal, tax, investment or other advice. Such advice should be sought form an independent regulated person or body who is suitably qualified to do so. Any information provided in this article is provided solely as general market commentary and does not constitute advice. GoldMoney will not accept liability for any loss or damage, which may arise directly or indirectly from your use of or reliance on such information.