By Alasdair Macleod
Market Updates August 03, 2018
Gold and silver lost further ground this week, as the dollar rallied back above the 95 level on its trade weighted index. As our headline chart shows, both metals have made a clear break below the important low established last December, with gold now 2.9% below it, and silver 2.3% lower. 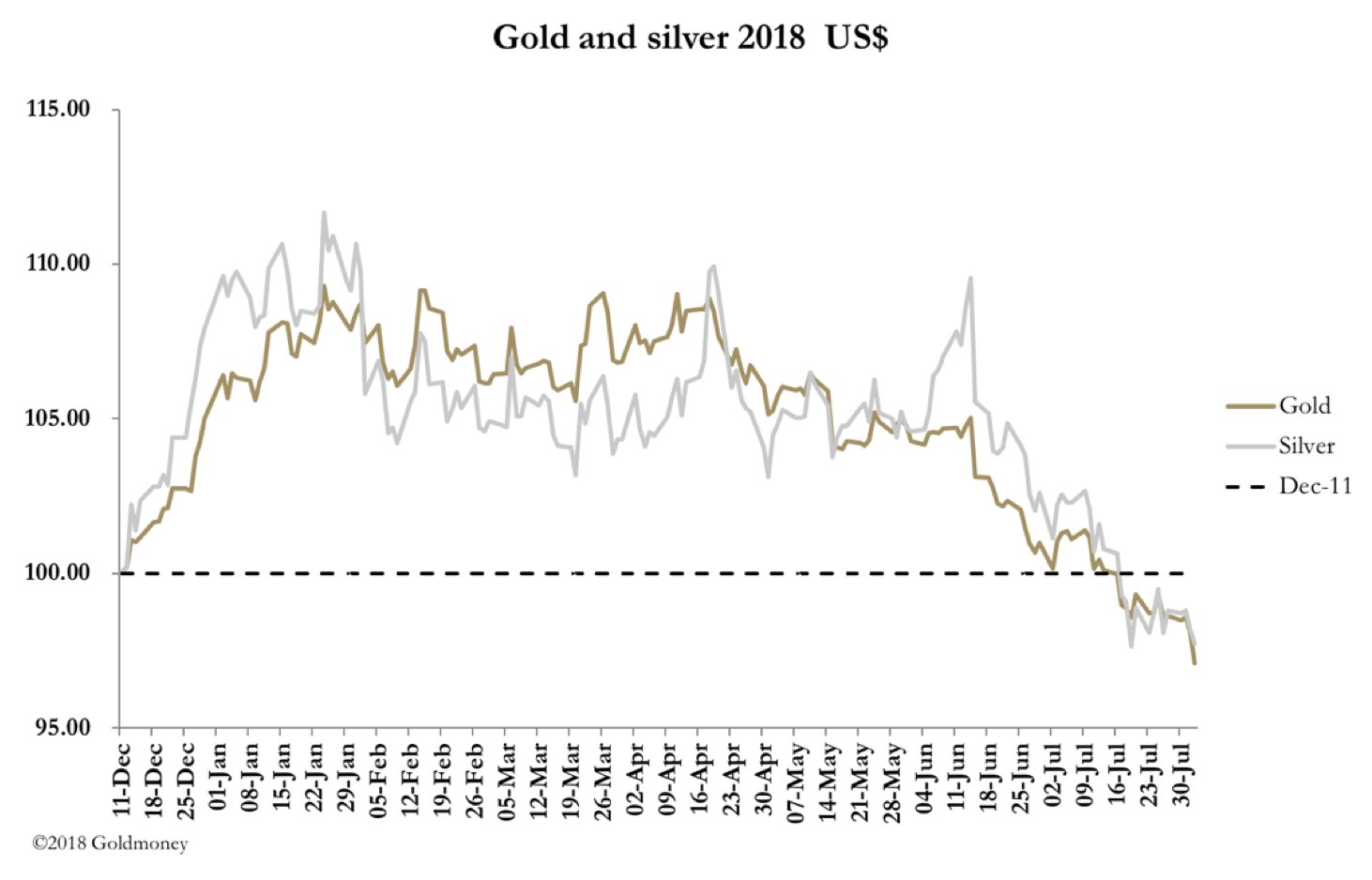 This week, gold lost a further $15 from last Friday’s close to trade at $1207 in European trade this morning (Friday), and silver lost 18 cents over the same time-scale to trade at $15.32.

To chartists, the technical damage has been severe, as shown in our next chart. 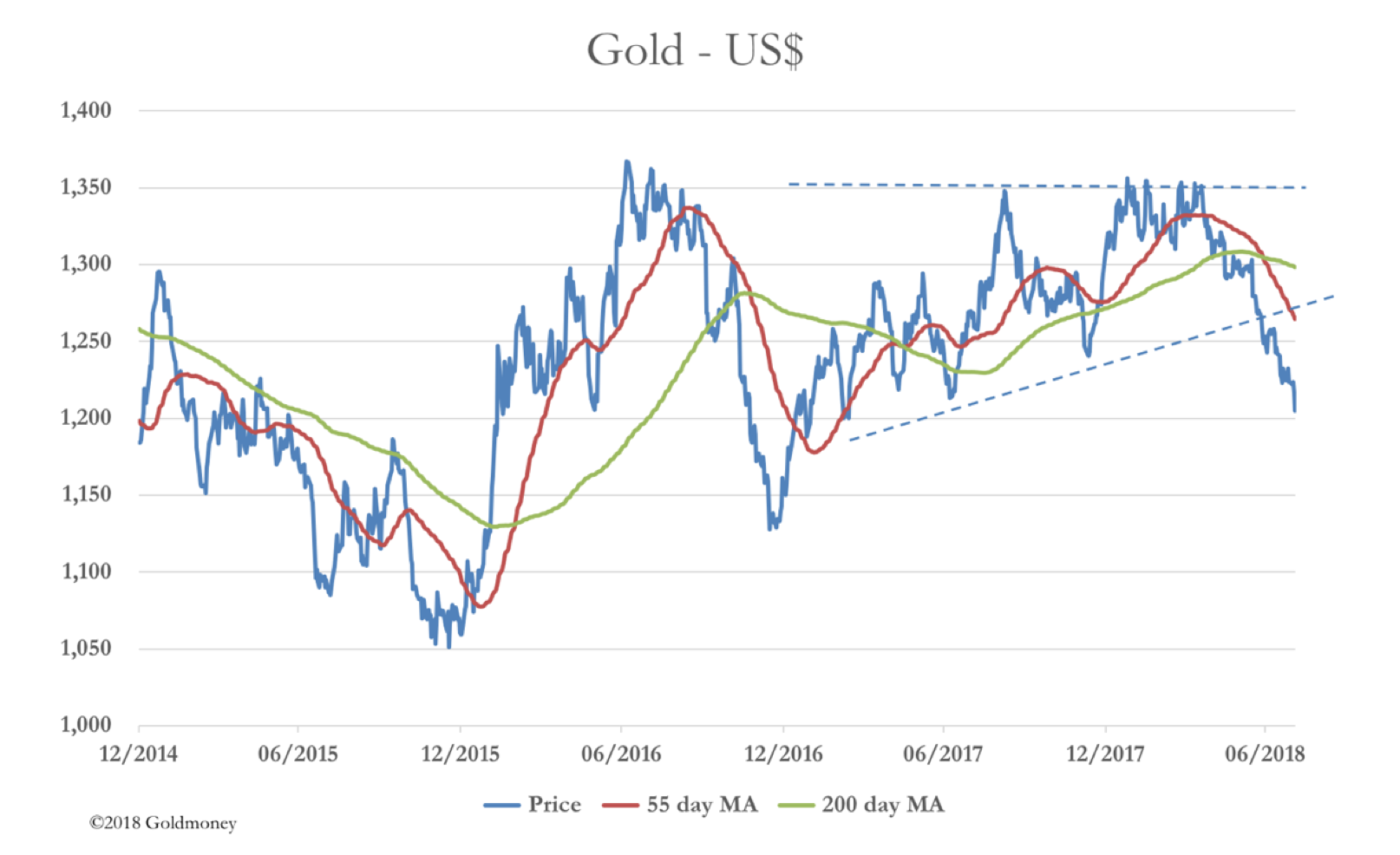 Technically, gold is in a bear market, with the price and commonly-followed moving averages in bearish sequence. Support, which could give way at any moment, is at $1200, but the real support is down to $1130, where the price turned in December 2016. However, it appears we are completing a consolidation of the initial bull move from Dec 2015 to July 2016, which has taken just over two years. If that forms a base for the next move up, it could be substantial.

So much for the technicals. Professional traders will pay more attention to the unprecedented oversold condition of the Comex gold future. The managed money category on the last Commitment of Traders Report (24 July) was record net short, and there can be no doubt this contract has become even more oversold since then.

In short, all the signs, a combination of extreme bearishness forcing individuals to throw in the towel plus the oversold position point to this being a significant sell-off, are this could turn out to be an enormous buying opportunity.

This brings us to currencies. In recent weeks, the yuan has fallen heavily against the dollar, prompting commentary that the Chinese economy is victim to a deflating credit bubble, confirmed by 23% decline in the Shanghai Composite Index for equities this year. The relevance for gold, priced in yuan, is the gold price has become no cheaper, and in fact has been trading sideways for a considerable time. Some analysts have been reading into this the possibility the gold price is being managed against the yuan, so on further weakness for the yuan they would expect the dollar price of gold to fall further.

There is no other evidence that this is so. But you can see why, from the following chart, that it appears that someone is buying gold every time it hits CNY8,200. 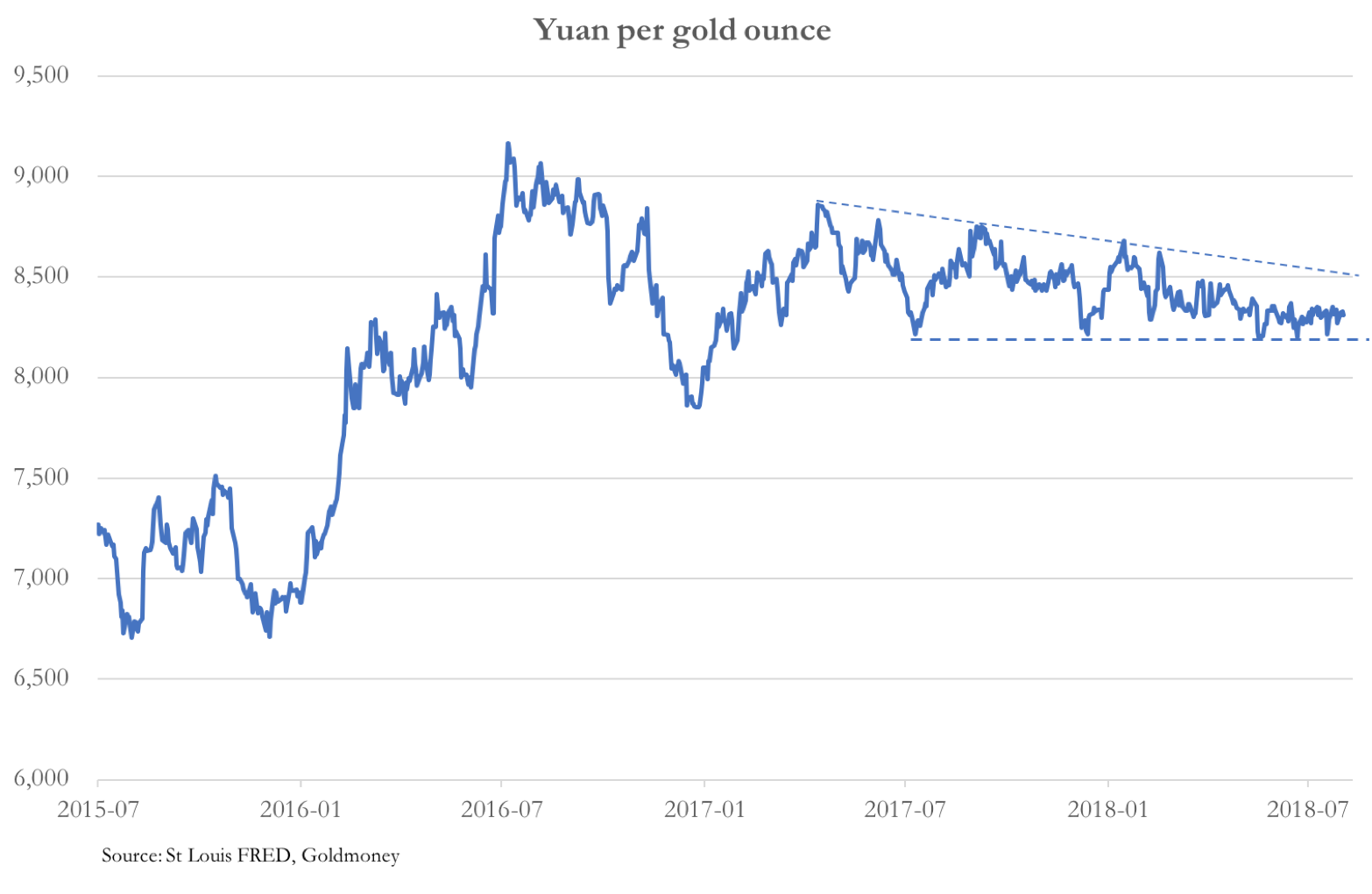 More likely, China is deliberately letting the yuan rate go lower, as part of her trade negotiations with the US. Furthermore, knowing she can set the CNY rate anywhere she wants, she has increased the profits measured in yuan on her dollar reserves, which she will surely sell if the US becomes too aggressive in her trade stance.

Of China’s position, we can be confident. This is not how it is being read in the West. Therefore, all Western capital markets, including gold, appear to be being mispriced. Could we be seeing the low point in gold this week? If not, we must be very close to the time when it will turn, probably very dramatically.