This week has seen a mighty struggle as the bears tried to push the gold price below the $1200 level. However on both occasions the price rallied strongly afterwards. 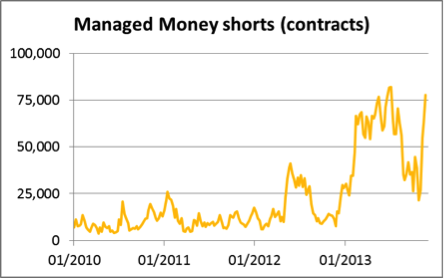 The next chart shows the net position of the largest four traders, who we can assume are US bullion banks, and are unusually net long over 60,000 contracts. They are obviously choosing to maintain a long position: 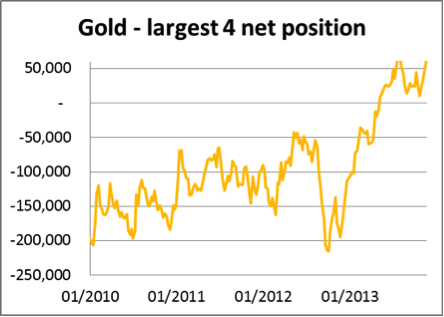 So there we have it: the big four bullion banks have near record net long positions and the trend-following fund managers have record shorts. Both camps have taken up extreme positions. Conventional wisdom tells us that this is highly dangerous for the fund managers.

In silver the fund managers' shorts are even more extreme in a less liquid market:

When hedge funds short silver, they usually do so to obtain more leverage compared with shorting gold. However the Largest Four have been unable to completely close their net short exposure which stands at a net 15,700 contracts, reflecting the poor liquidity in this market relative to the size of traders' bets: 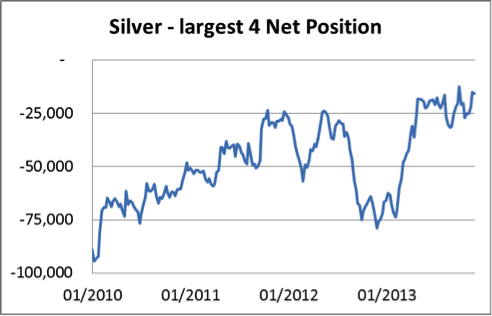 From mid-year the largest bullion banks have been careful not to increase their net shorts and the squeeze on the hedge funds was more vicious as a result, with silver rising 33% from a low of $18.6.

Both gold and silver paper markets are therefore highly vulnerable to a bear squeeze. Silver has the added problem for the shorts that industrial users, who would have budgeted 2013's cost of silver at over $30 last December have been buying futures to lock in windfall profits. At the same time with the gold price close to production costs, mine managers have sold gold forward into price rallies to avoid operational losses.

Turning to broader considerations there was some evidence this week that the relationship between bond yields and gold price movements is changing. The week has been generally bad for bond markets with yields rising; this was the excuse perhaps for the mark-down on late Tuesday/early Wednesday, reversed by gold's strong rally later that day.

The end result was gold closed up and bond prices firmly down. A few more trading sessions like this are likely to undermine the confidence that shorting gold is a good substitute for shorting bonds.

Here are some of the more important announcements due next week.