Market Report: Quieter ahead of G20

Gold and silver consolidated recent gains this week, after last week’s dramatic break-out. On Tuesday, gold spiked up to $1439 and drifted back to $1414 in early European trade this morning (Friday), for a net gain of $15 on the week. Silver continues to disappoint, losing 15 cents on the week at $15.22. 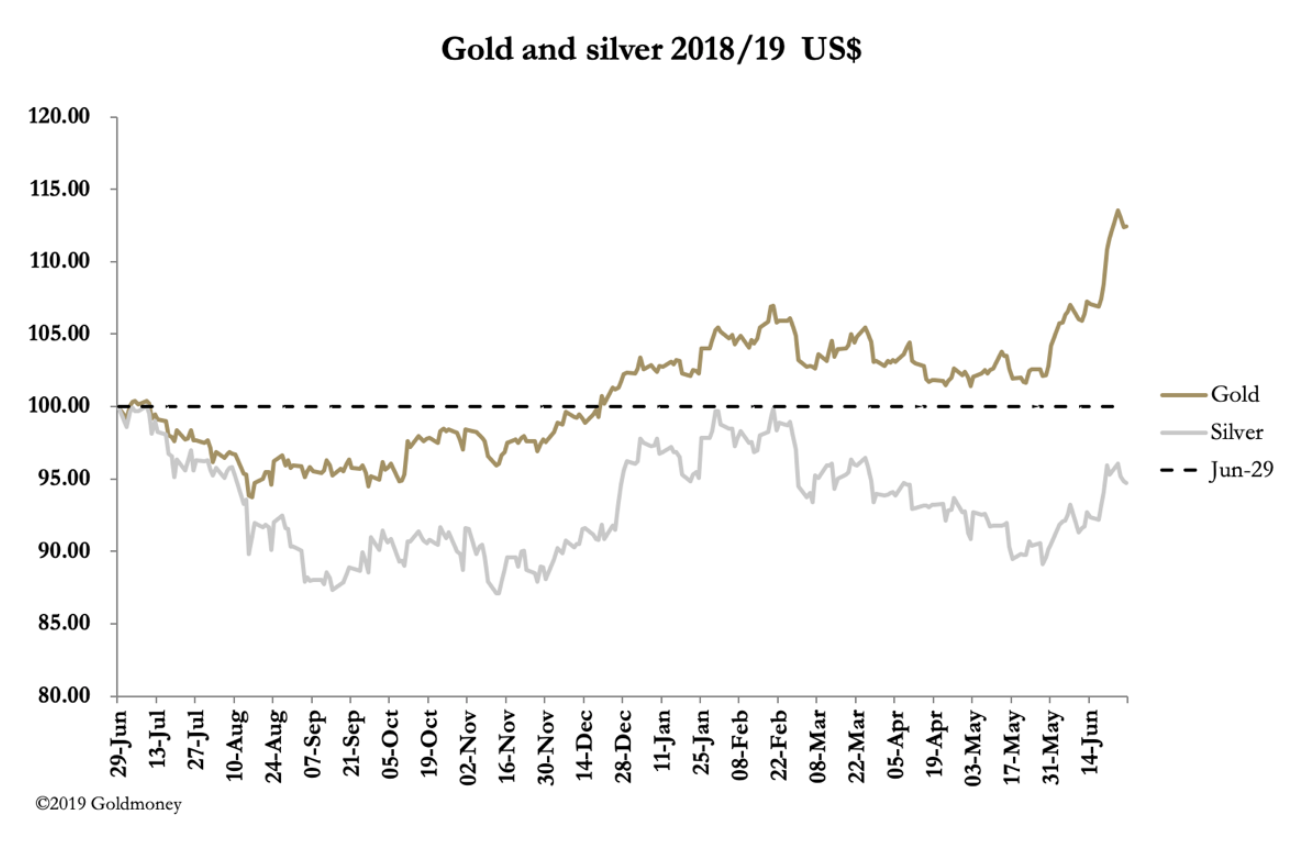 Currency markets are in shock, with alternatives to fiat suddenly in the limelight. Bitcoin also staged a dramatic run, having nearly doubled from its June low of $7,500 to a spike on Wednesday of $13,868. Like gold and silver, Bitcoin has subsequently eased.

Perhaps the most important chart is of the euro/dollar rate, which appears to have had a classic breakout on the upside. 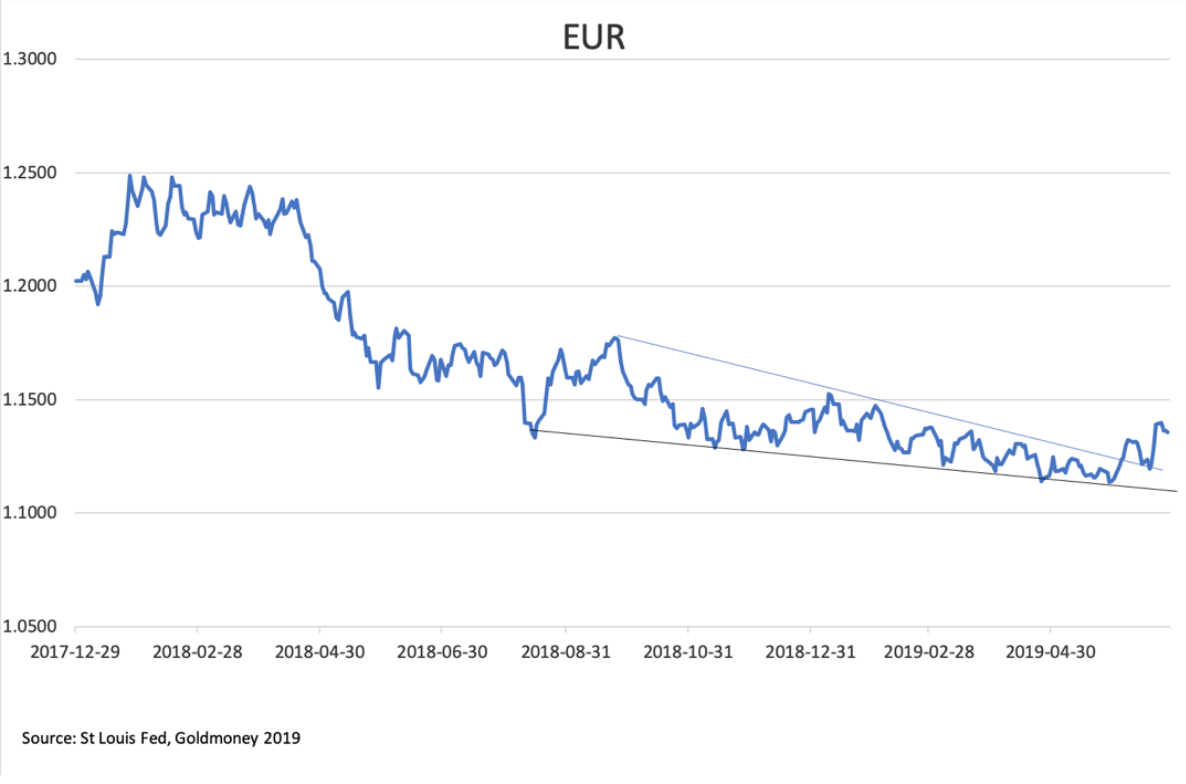 The break-out and pull-back test of a diagonal triangle ending is text-book technical analysis. The euro has been like a tightening coiled spring in its bearishness, and goodness knows, there are enough reasons for euro-gloom. But the chart tells us this breakout is likely to be dramatic, with the euro rising strongly over the coming months.

Why does this concern us? Because the other side of this drama is the dollar, and we see the same technical pattern reflected in its trade-weighted index, which is our next chart. 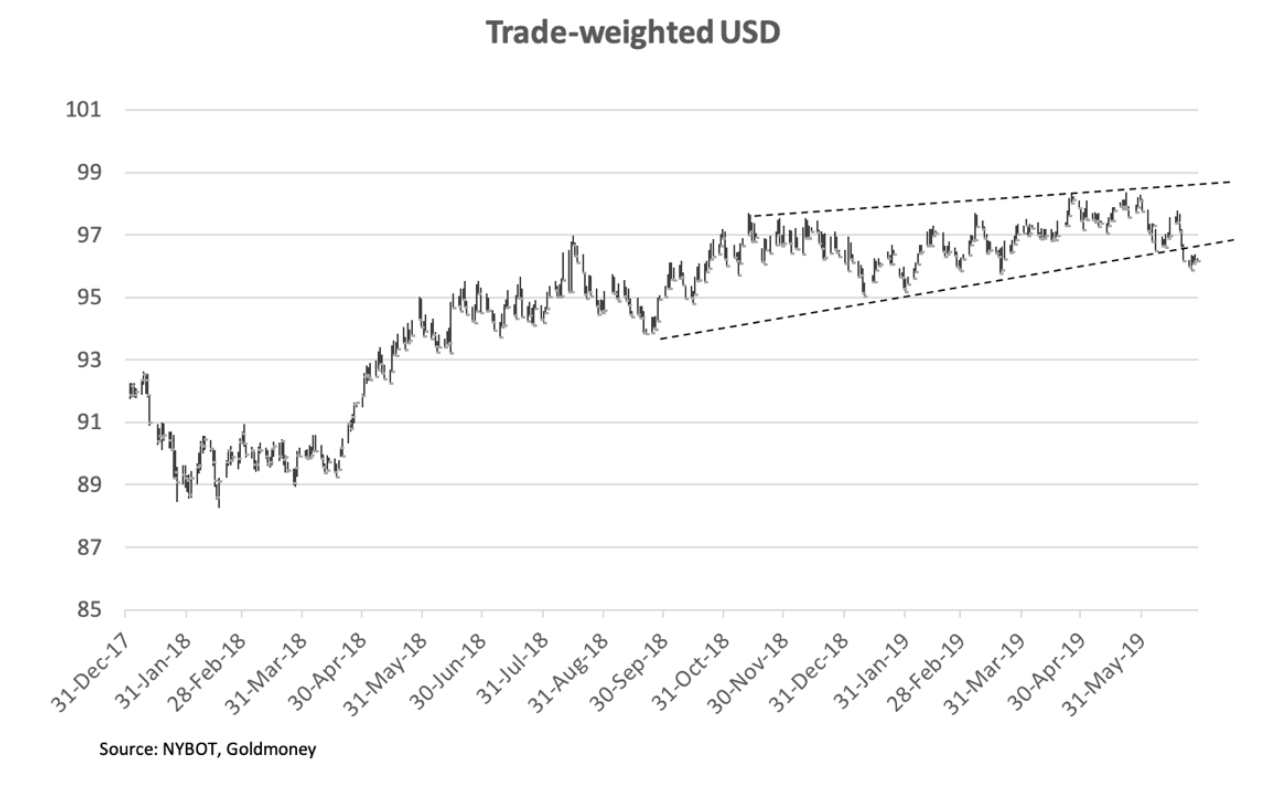 Admittedly, the largest component by far of the TWI is the euro, so we are repeating ourselves here. But this message is very important for gold. The dollar breaking lower out of what now looks like a very bearish top formation confirms what gold, and even bitcoin, appear to be now telling us. And that is a fundamentally bearish outlook for the dollar is unfolding.

This is the background to the G20 meeting in Osaka, underway from today. Normally, these are staged set-pieces, with protocols and communiqués settled in advance. Since the presidency of Donald Trump, they have become disrupted and unpredictable. At a guess, Trump is going to tell his confrères they must reduce interest rates, they must not let their currencies weaken against the dollar, tariffs are the most effective way to address unfair trade practices, and he is ready to use them against the EU as well as China. Oh, and why isn’t my friend Boris here?

I write this tongue-in-cheek, but it is worth making the point that it would be complacent to expect current disagreements between China and America in particular as well as with the rest of the world to be papered over. Furthermore, Trump’s economics, judging by the pressure he’s putting the Fed under and his disregard for budget deficits, are wildly inflationary. And lastly, Mrs May is no longer relevant.

Even if all goes well, we still face the reality of dysfunctional bond markets, a dollar that now looks like it could be in freefall and a growing certainty of a deepening recession. It all points to a renewed bout of monetary inflation in all the major currencies. It is a fiat money problem, not just a dollar or euro problem. As an escape to sound money, gold and possibly silver might be seen as increasingly attractive even to those who currently think metallic money was just a phase in human history.