The rise in the gold price ran into profit-taking on Wednesday. Having risen $160 to $1345 some short-term profit taking is only to be expected, and silver followed suit.

The action in silver revolved round the March contract on Comex, with some players choosing to close their positions rather than roll it into a later month. This action can be clearly seen in the chart below. 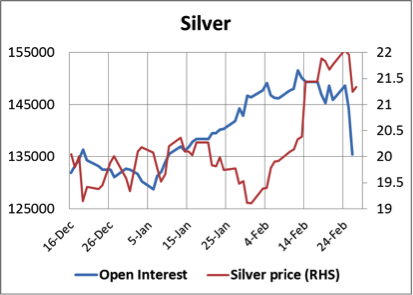 Open interest (the blue line) fell off a cliff on Wednesday, which must have pleased the bullion banks, who are trying to control their short book, as can be seen in the following chart, of the largest four traders on Comex (a.k.a. bullion banks). 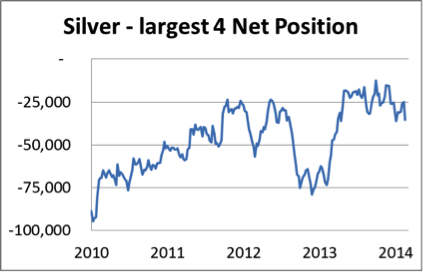 Having reduced their net shorts to less than 16,000 contracts three months ago, the largest four's net short position had deteriorated to over 35,000 in a rising market. It is hardly surprising that at the first sign of two-way trade (indicated by volumes in the silver contract having picked up significantly this week) these traders are looking to reduce their position.

This sums up the market today, which is highly technical and dominated by short-term scalpers. Not many traders have gone long, which we know from the very negative sentiment at the time of the year-end. Instead, the action is around hedge funds caught wrong-footed by a 15% rise in the silver price. As they cut their losses by buying-to-close, the bullion banks end up getting squeezed as well.

This suggests to me that the correction in silver will not last long before lower prices attract more genuine buying.

The same is broadly true in gold, though this is a more liquid market. Demand for physical metal from China and Hong Kong continues at record levels, and there is talk of the Indian Government relaxing import restrictions in this election year. I personally think it unlikely, but given that Indians are currently paying well over $1400 equivalent the effect on markets of such a move would be immensely bullish.

In the political arena attention is focusing on the Ukraine, with growing tensions between NATO and Russia, who if their actions against Georgia over South Ossetia and Abkhazia in 2008 are anything to go by, will have no hesitation in invading Crimea and other eastern regions of the Ukraine. The difference between the two is the Ukraine borders with NATO members. This could have an effect on the gold price.