By Alasdair Macleod
Market Updates April 26, 2019
From last Friday’s close gold recovered slightly after last week’s sell-off, gaining $7 at $1283 by early European trade this morning. Silver was up three cents at $15.04 over the same time period. Trading was generally light, being Easter week with many markets closed on Good Friday and Easter Monday. 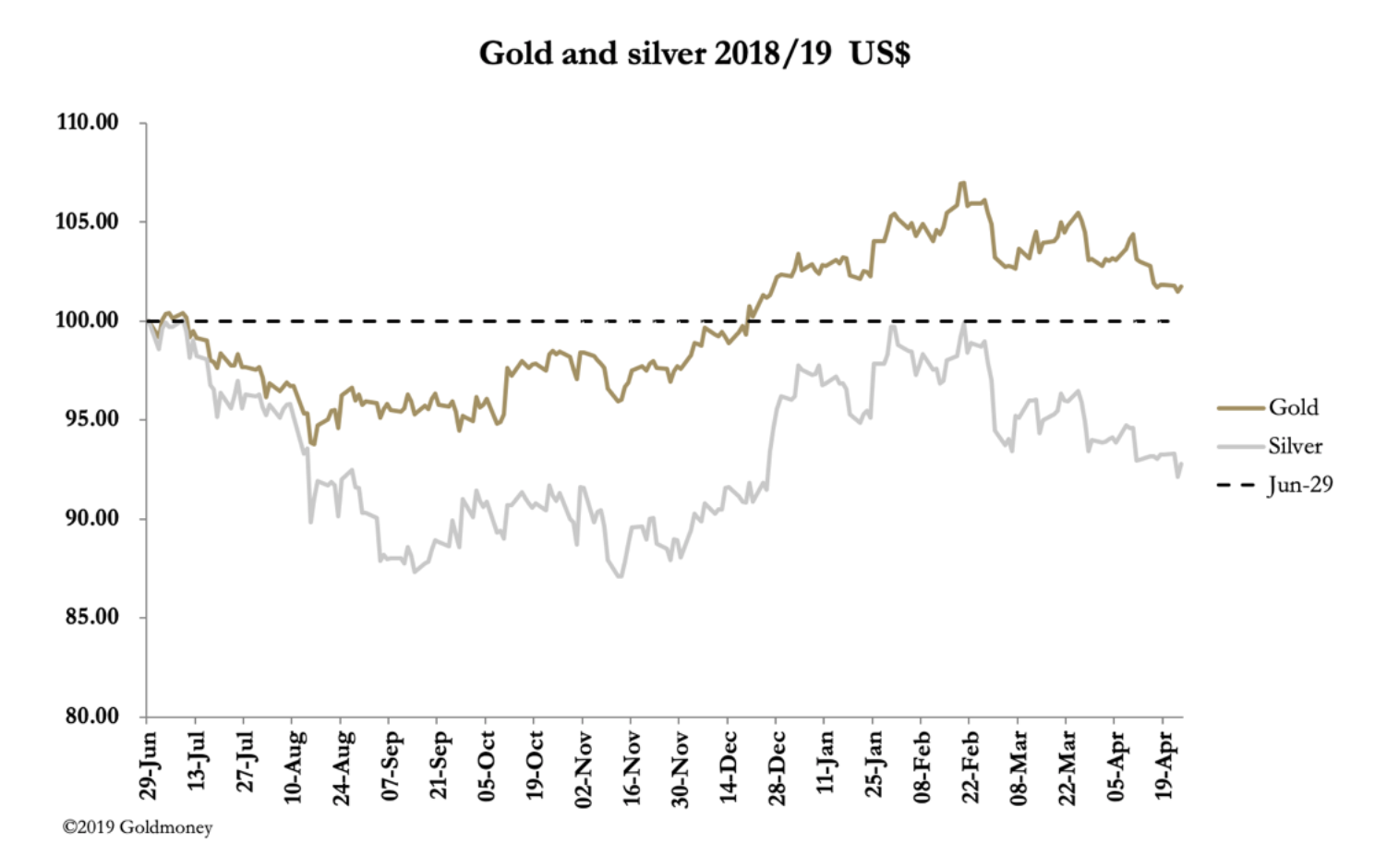 The lowest prices were seen on Tuesday, when silver sold off to $14.75, a level not seen since Christmas, and gold down to $1266.30. Volumes picked up noticeably on that day. Tuesday is also the day of the Commitment of Traders figures, so no doubt it will register as very oversold. We will know more this evening when the numbers are released after trading hours.

Our next chart shows the Managed Money category net position on the previous Tuesday. 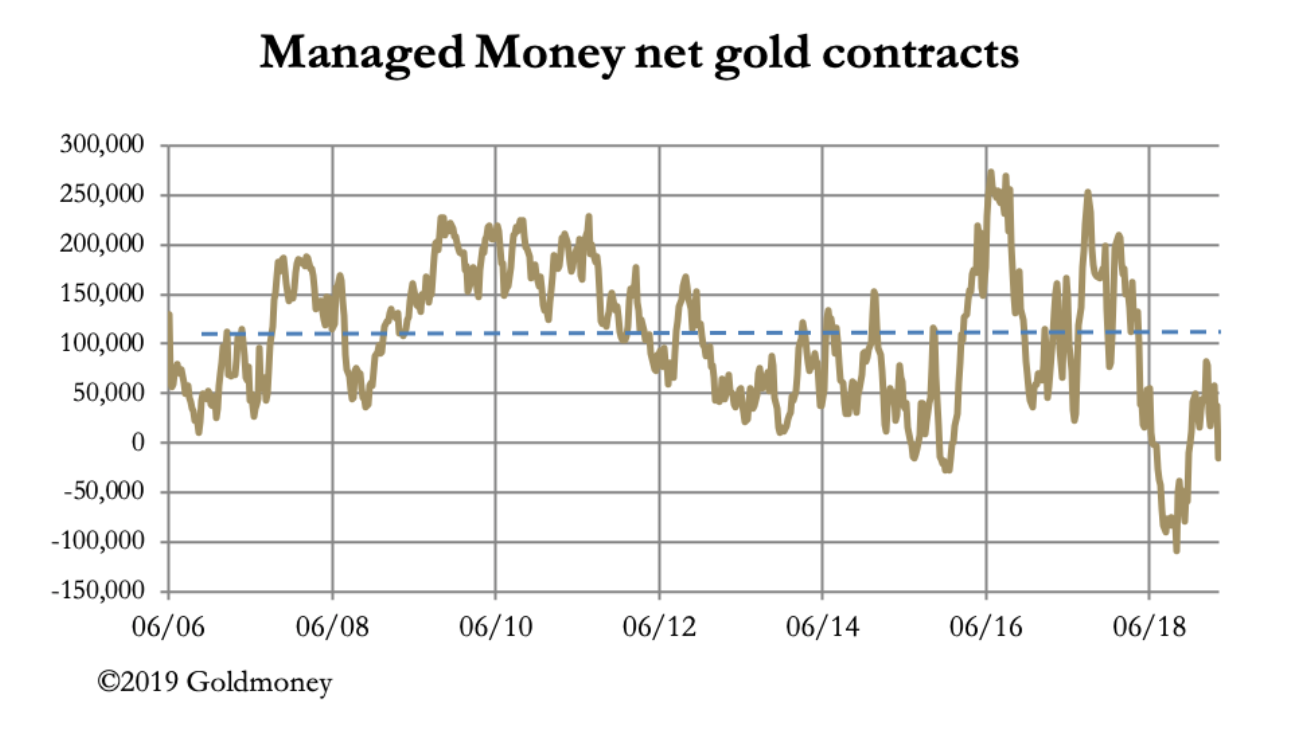 At net short 15,387 contracts, gold was already very oversold on the back of that day’s sell-off when gold fell from $1288 to $1277. Tonight’s COT numbers will be interesting.

If gold bulls are worried, these moves seem designed to make them so. Bullion banks appear to be shaking out speculative positions. There have been stories of two large sell orders worth a notional $1.5bn each being dumped at the New York opening, on both Tuesdays. These had the effect of taking out stops, thereby creating additional selling. The probable reason for this action is bullion banks have decided it is time to close their bear positions. Equally, they could be watching currency developments.

The dollar index is finally breaking out on the upside. This is our next chart. 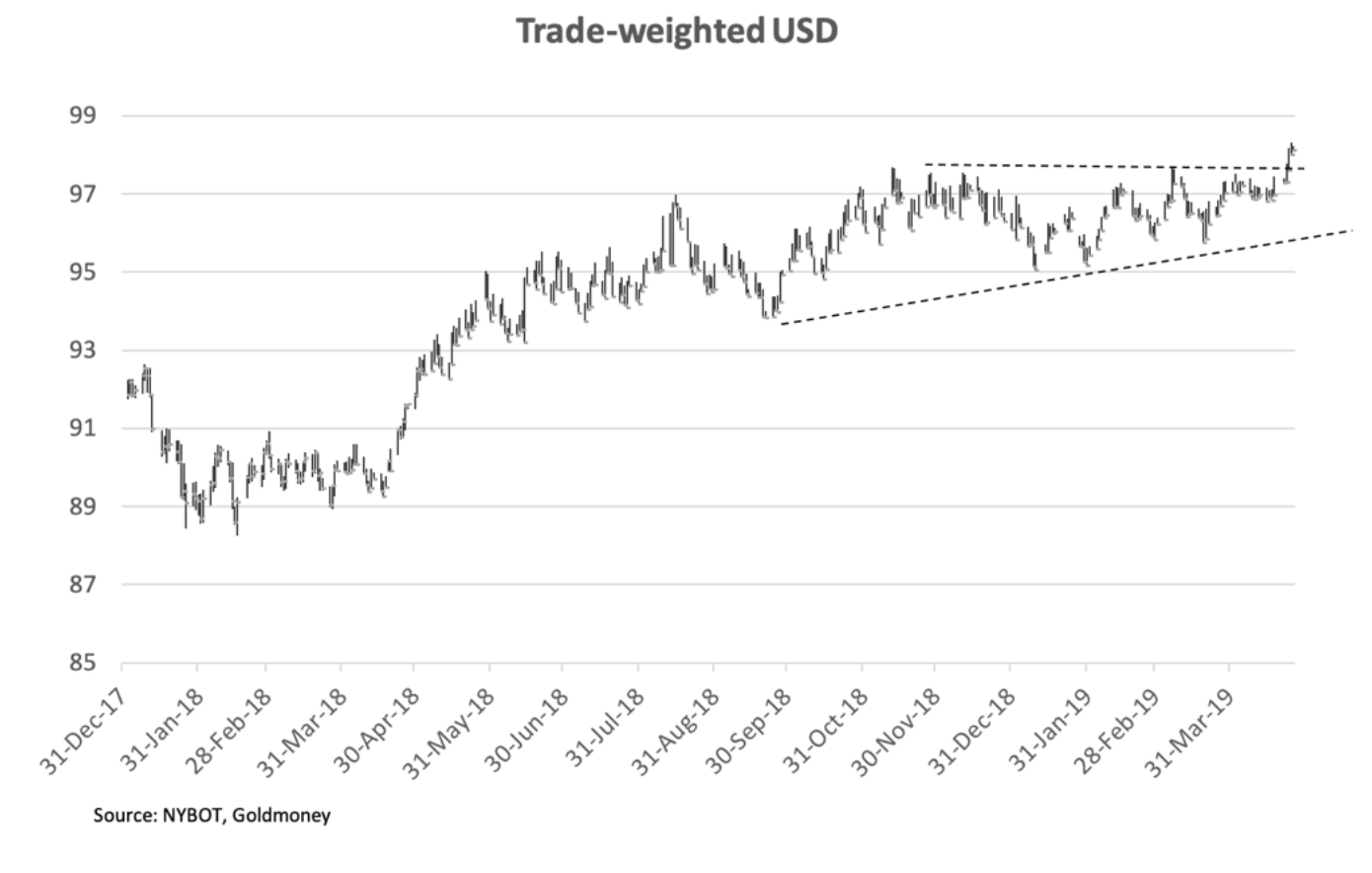 The dollar’s Trade weighted index has broken out of a triangle pattern and looks set to move quickly to challenge the 100 level. The largest component of the TWI is the euro, so that is where the trouble lies. 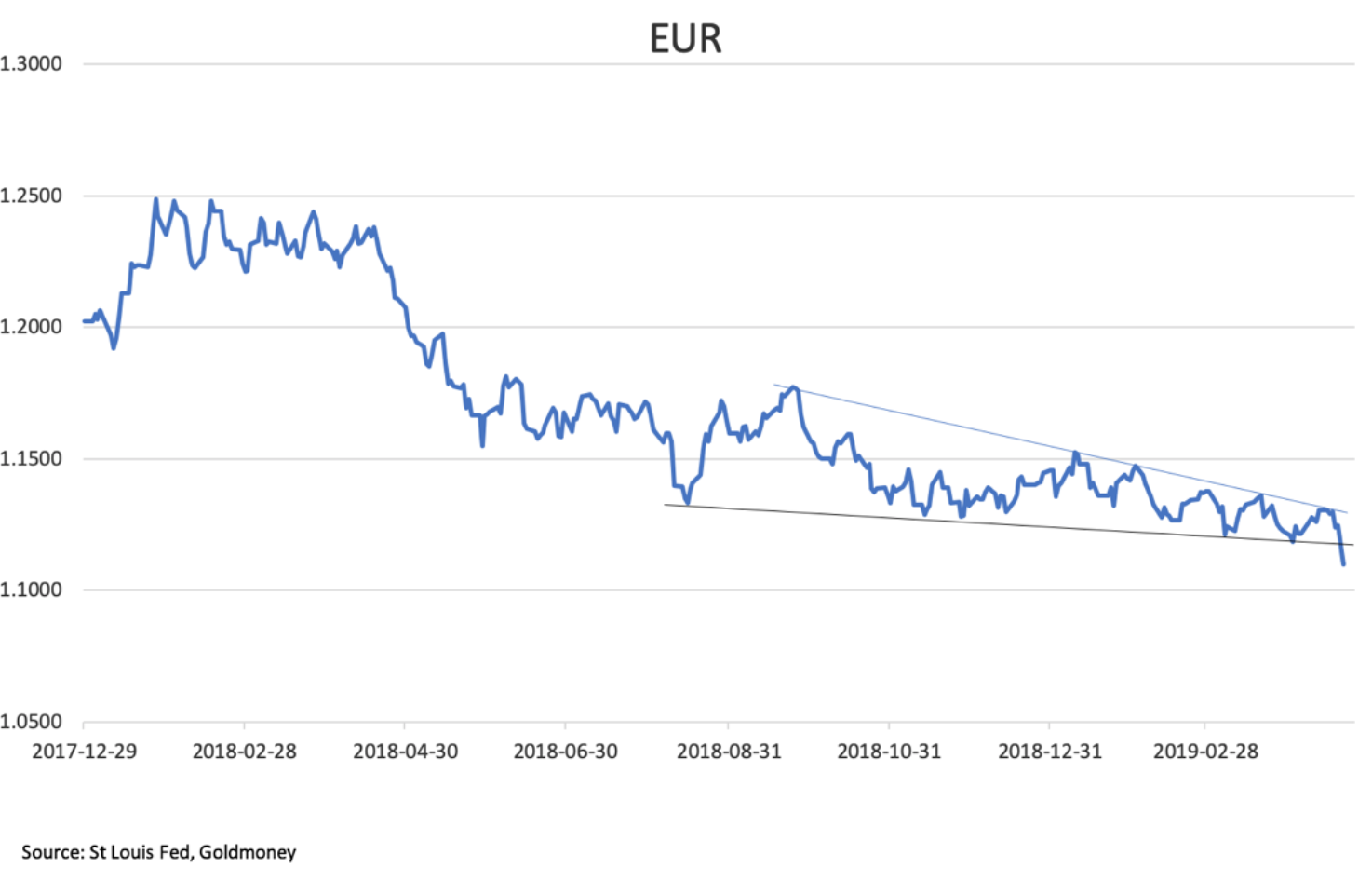 The euro chart is the mirror-image of the dollar’s TWI, which given its weighting one would expect. And just as the dollar has broken above its triangle, the euro has broken below a remarkably similar but bearish pattern.

This should be taken seriously, because the markets are telling us the euro is in deep trouble. There are myriad reasons why this could be so, but this is a very bearish chart. Therefore, it serves as confirmation that the dollar’s trade-weighted could well be on its way to 100+.

This being the case, we can see every reason for speculators to ignore the oversold futures position and sell them short as a means of going long of the dollar.

Our last chart is an update on the technical position. 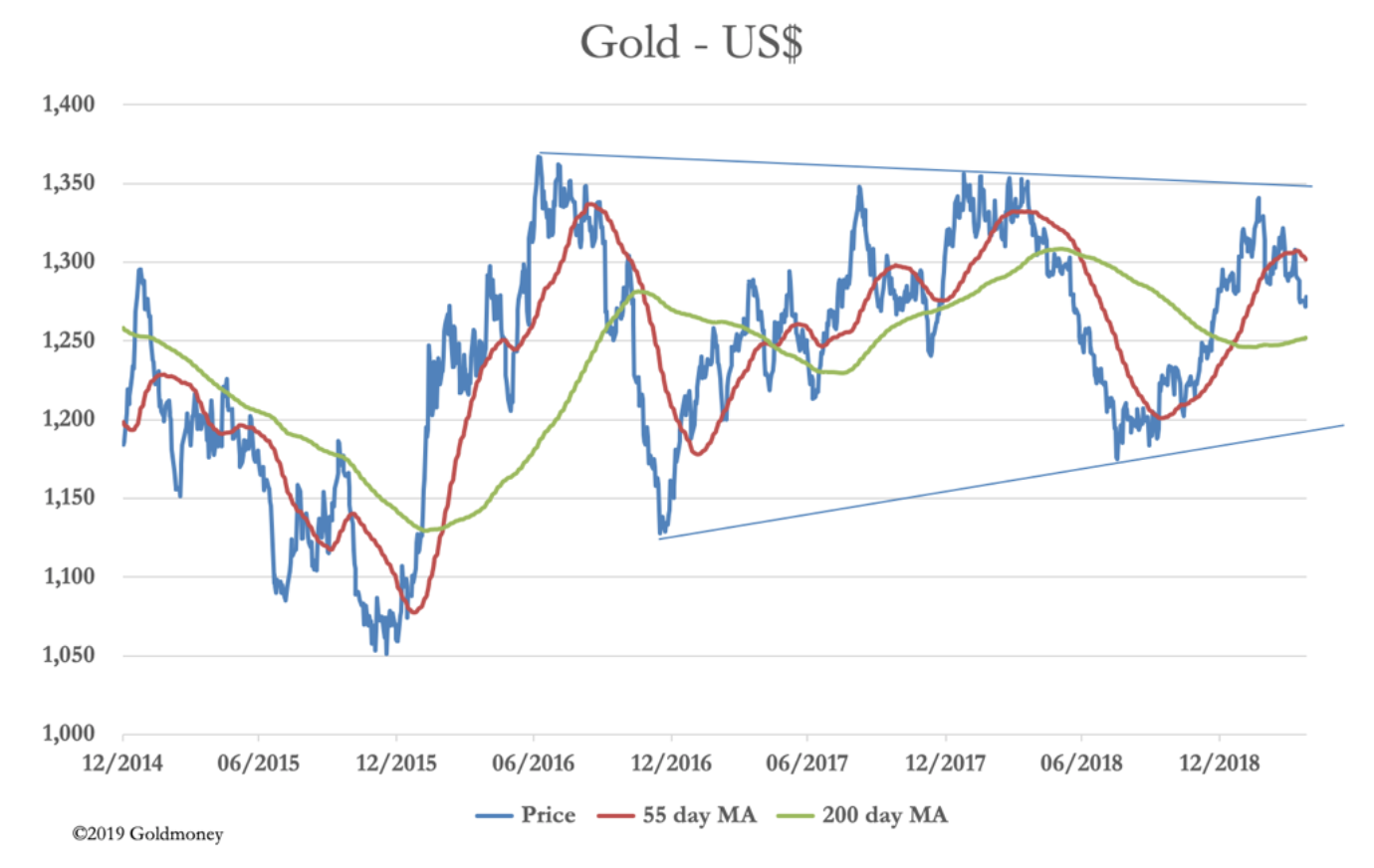 The 55-day moving average is turning down, though the 200-day MA is still gently rising. It appears the gold price could now test the 200-day MA, which is at $1251. If so, that would constitute a normal correction of the bullish trend which started last August and ended in February.

With futures so oversold, a move down to that level suggests a fairly rapid recovery should follow. Traders will be watching the dollar’s trade-weighted index closely for the timing.