The dollar continued its upward path against the major currencies this week, and gold and silver prices suffered accordingly.

The bears have maintained the upper hand, as shown in the following charts of Comex prices and Open Interest. 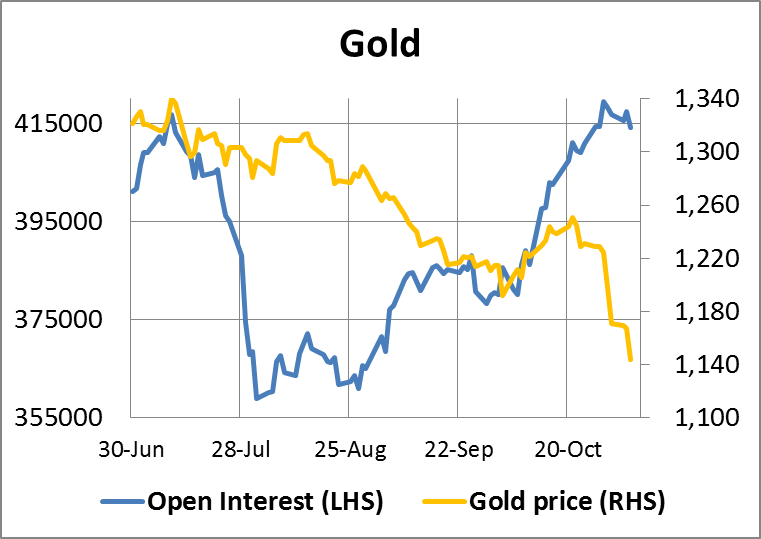 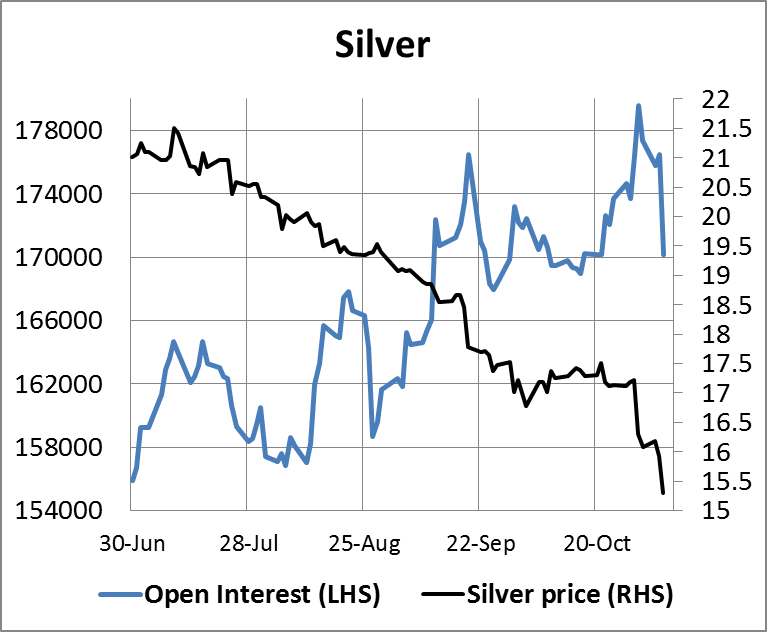 In both cases Open Interest has been rising, indicating a substantial and growing short position, though silver's fell sharply in heavy volume on Wednesday on technical grounds: it appears that someone rolled 6,000 contracts out of the December future into an option position. The other side of the precious metals trade is a strong dollar, strong equities and robust bond markets, which taken all together indicate that portfolio managers are universally bullish and ignoring risk. Time will tell if this Panglossian view is justified.

Silver has been particularly vulnerable, and the gold/silver ratio now stands at almost 75 times. This is not unprecedented but can be regarded as extreme. The result is retail demand for silver coins and bars has escalated, in the former case leaving the US Mint sold out of silver eagles. Demand for gold coins and small bars has also taken off with dealers in Germany and Austria reporting brisk business. Demand in China and India has also increased noticeably in recent weeks, and the Shanghai Gold Exchange reported this morning deliveries of 47.45 tonnes in the week ending 7th November, almost double the rate in July.

If Chinese and Indian citizens are increasing their purchases it is a fair bet that other Asians are as well. The big ETF, GLD, has lost only 28 tonnes since mid-October, hardly enough to make much difference, so it is no surprise that based on GOFO rates gold is now in high backwardation.

Global economic news this week has not been encouraging with growing evidence of slump conditions in Japan and developing in the Eurozone. Eurozone difficulties are affecting the UK, and the slide in the JPY, EUR and GBP against the US dollar confirms this diagnosis. At some stage, these economic difficulties will have an impact on the US economy, and without aggressive monetary action from the Fed it is hard to remain bullish of equities. Furthermore bonds are likely to see a surge in supply as government deficits widen again and corporations seek liquidity.

Put another way, financial markets today reflect very little risk, a situation that seems likely to change radically in the coming months. That being the case, there is likely to be a positive reassessment of gold and silver prices.

To summarise, today the headline story is the continuing bear-trend in precious metals fuelled by a strong dollar. This ignores the fact that demand for physical bullion is increasing significantly at these levels, and it is not dollar strength that prevails, but weakening foreign currencies driven by credit contraction, real or anticipated. Risk-off looks like being replaced by risk-on in the coming months.