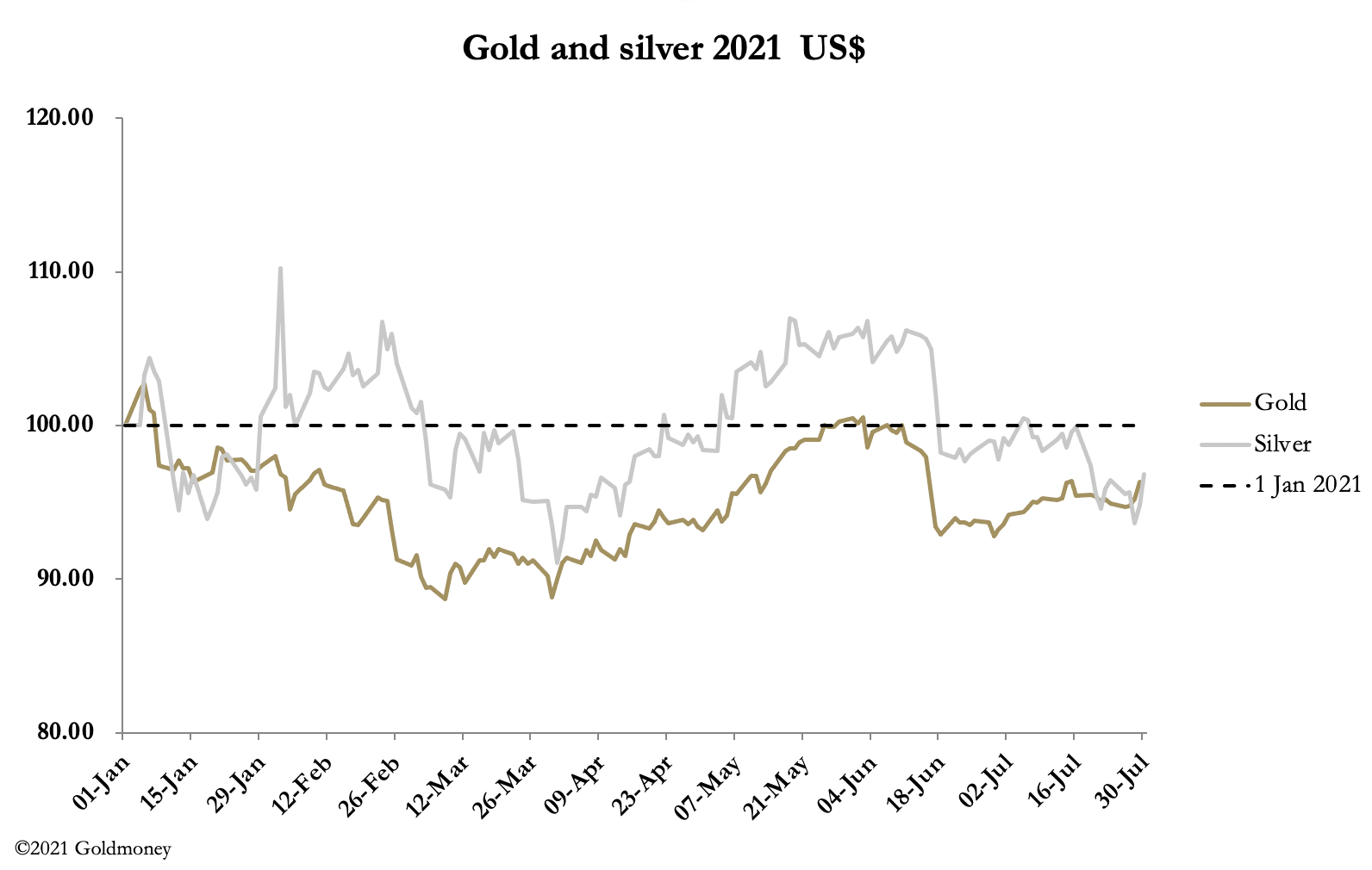 Following the demise of gold’s active August contract, gold and silver had a better week. In European morning trade, gold was at $1829, up $28 from last Friday, while silver rallied to $25.60, up 45 cents. As always at the month-end, the bullion banks had an interest in seeing prices lower, so that call options expired worthless and in the hope that short-term speculators would trade these factors, giving added downward impetus to prices.
Following a pause on Wednesday, the change came yesterday when gold rose over $20 and silver by 56 cents. Until then, positive sentiment had deteriorated, probably the lowest seen for some time, lower even than at the end of June when gold tested the $1750 level. And in silver, the unwinding of small investor interest in SLV, which momentarily drove silver to touch $30 on 1 February, has brought back some liquidity into the market — enough to encourage bullion banks to shake some more silver out of loose hands.

This left the gold/silver ratio to 71.5 this morning, which is our next chart. 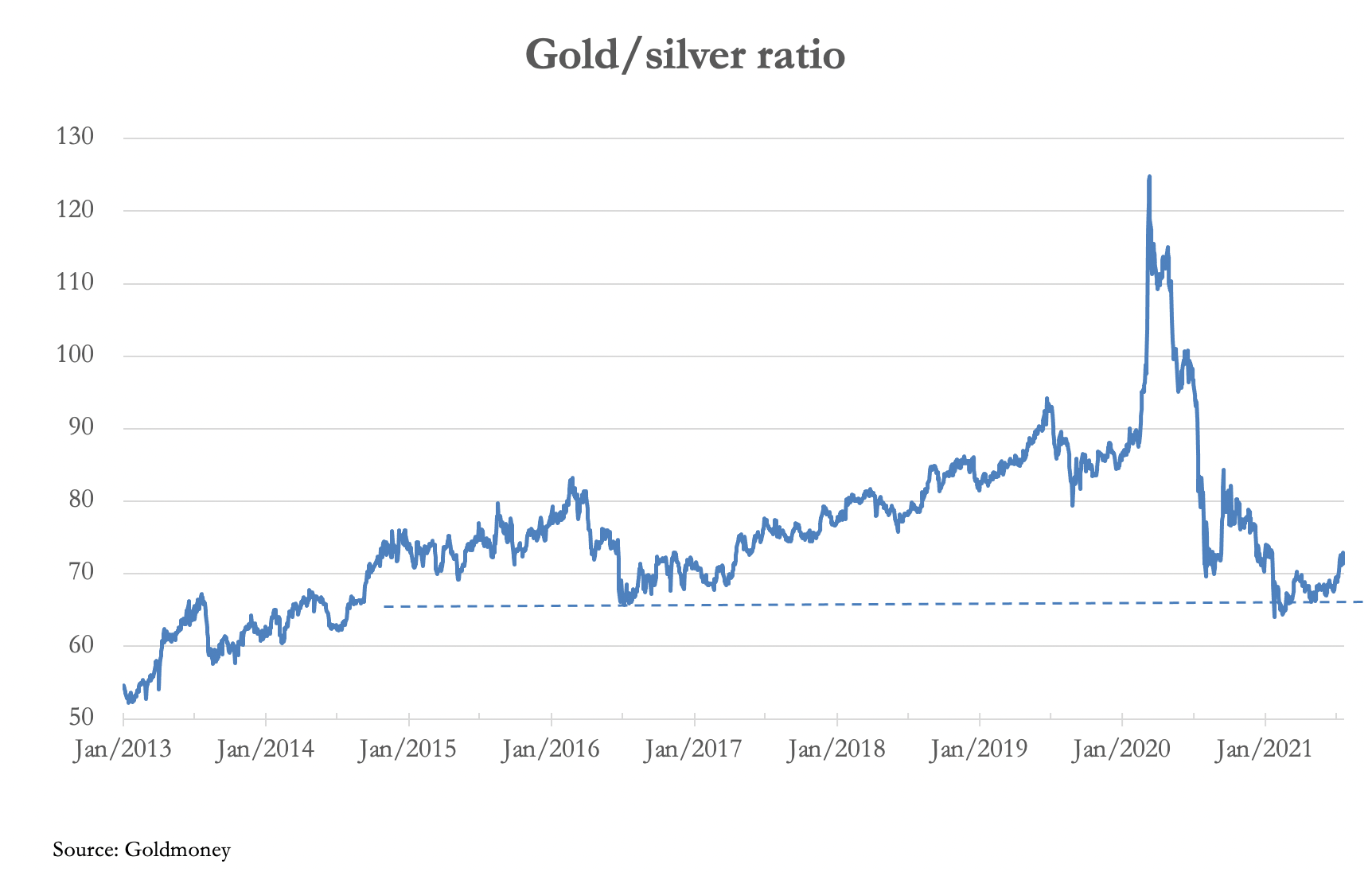 Having nearly halved from the 20 March 2020 peak, the upper sixties proved to be resistance to further falls. While there is no knowing when that resistance might be overcome, we can conclude that when it is the bullish move for silver relative to gold is likely to be significant. And the lesson from yesterday’s trading, when silver was up 3% at one point tells us that futures traders are short enough to be badly squeezed.

But with some physical liquidity being recovered in London, the direction will probably come from gold, and it has been noticeable in the market how gold held up relative to silver, perhaps confirming relative liquidities. That said, excess silver liquidity tends to dry up in a flash.

On fundamentals, this week saw the release of the Fed’s FOMC July minutes, another factor that nailed the timing of precious metal price recoveries to late this week. Ahead of it, buyers held off, amid rumours that the Fed might say something about tapering, given the sudden rise in official price inflation figures. Instead, the FOMC remained firmly in denial of these factors, maintaining the funds rate at 0-0.25%. It was an exercise in justifying no change.

For bond markets it was all one big yawn. But the dollar’s trade-weighted index slipped noticeably, helping to underwrite gold and silver, along with some key commodities such as copper. The dollar’s TWI is next. 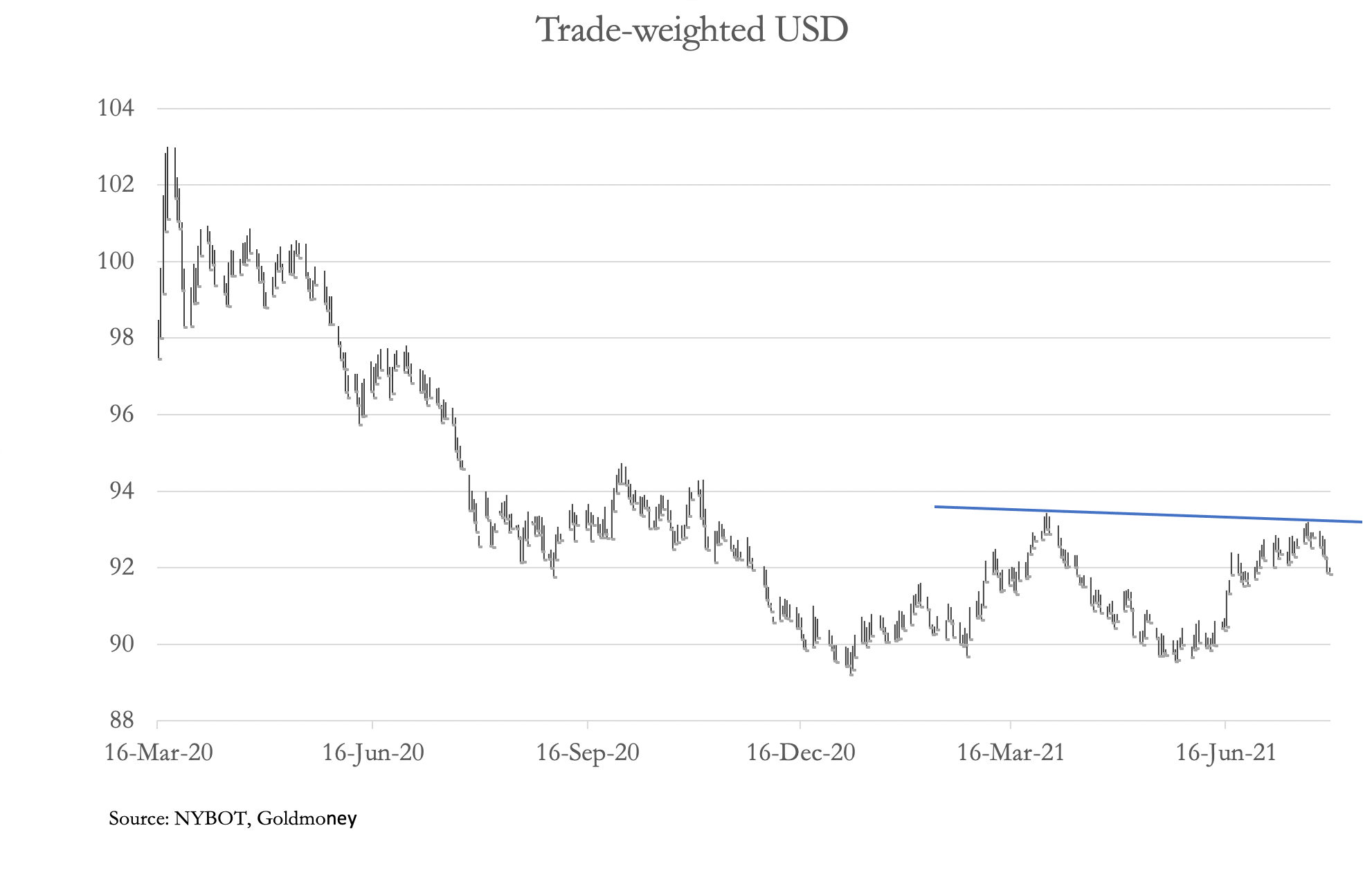 Having briefly touched 93 and failed to properly test the high established in late March, the TWI appears to have some downside in it. It will need close watching, because a combination of further rises in commodity prices and a weakening TWI would be a threat to the Fed’s interest rate policies. Equities, and even bond markets would then begin to take note.

But other than these factors, the outlook for gold and silver next week looks positive based on technical factors. The sellers have sold, and bullion banks are wary of increasing their shorts.