I shall come to this important event later in this market report; but first, our customary look at this week's trading. From Monday through Wednesday the gold price found firm support at the $1305 level before gaining a few bucks to $1313 by close of play last night.

However, the underlying position is more positive than this limited move suggests, with the Swap category on Comex appearing to be in some difficulty. Swaps are mostly non-market making bullion banks. Their net short position on 5th August was 84,108 contracts, about 30,000 higher than their long term average, and while this may have reduced a little since then there is insufficient liquidity on Comex for them to close this collective net short without driving prices sharply higher. The chart below, which is from the dramatic knock-down in April 2013, shows net swaps are locked into a declining trend while the gold price stubbornly refuses to go any lower. 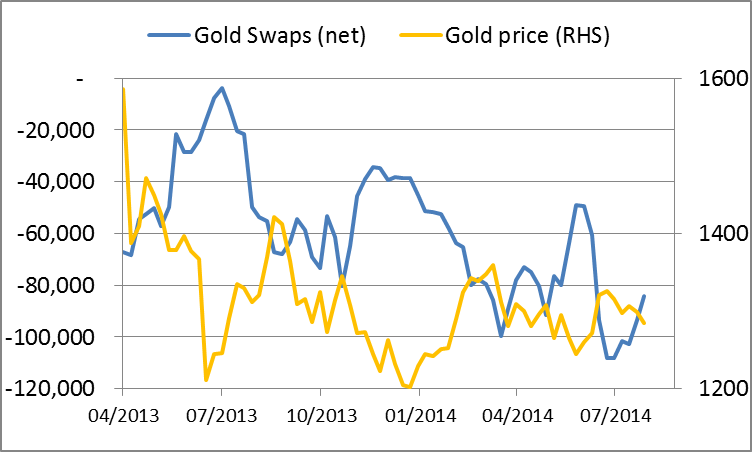 Obviously, Swaps trade most profitably on the bear tack in a falling market. This is visually represented in the chart by the blue line rising when the yellow line falls, and vice-versa. This clearly worked well until April this year when the gold price failed to respond to changes in the Swaps' net shorts.

The result is Swaps are now net short to an uncomfortable degree with a price that is no longer falling. They have a similar problem in silver and the technical situation is potentially very strong as can be seen in the Open Interest chart below. 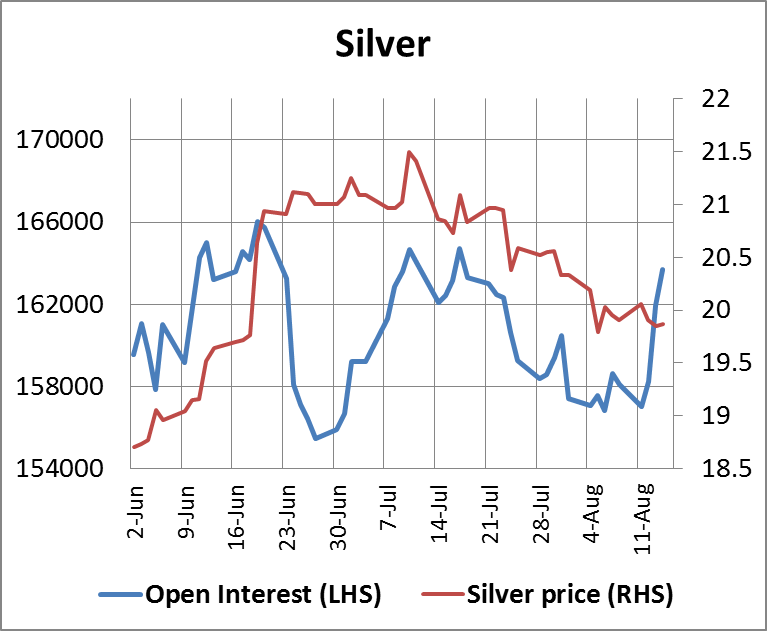 Open interest is rallying strongly while the price remains held under $20. This indicates someone or some parties are sitting on the price refusing to let it go higher The next break above $20 could see the price go substantially better. With the new London fix from today, it looks like Canute's attempt to stop an incoming tide of buyers.

Later on today the new daily silver fix regime will start. It will be run on the Chicago Mercantile Exchange's platform (the Comex people), and supervised by Thompson Reuters. For the first six months access to the fix for observers will be free, so we can all see how it works.

This is a welcome advance on the old silver fix, where bullion banks negotiate the price in secret. This should be positive in the longer-term, because market transparency tends to lead to wider institutional and public participation. We are a long way from a fully transparent market, but at least the veil of dealing secrecy is being lifted a little.

Imagine you are running a hedge fund. You don't deal in gold or silver because the physical market is too opaque. Now we have a visible auction process in silver, which you can watch on-line. You can monitor it for a week or two to get better a feel for how much money is required to move the price. It's not just you, everyone else is also getting interested. Now you can assess your dealing risk far better and will be prepared to deal. And you look forward to the gold market becoming more transparent as well.

To summarise, I believe we are seeing a very important change in bullion markets to the disadvantage of dealers who hide behind OTC opacity.

US: Fed's Yellen speaks at Jackson Hole on labour markets.