By Alasdair Macleod
Market Updates November 09, 2018
Precious metals were lower in quiet trade this week, which was dominated by the mid-term elections and a strong dollar. Gold was down $12 from last Friday’s close at $1220 in early European morning trade today (Friday) and silver down 40 cents at $14.34 over the same time-scale. 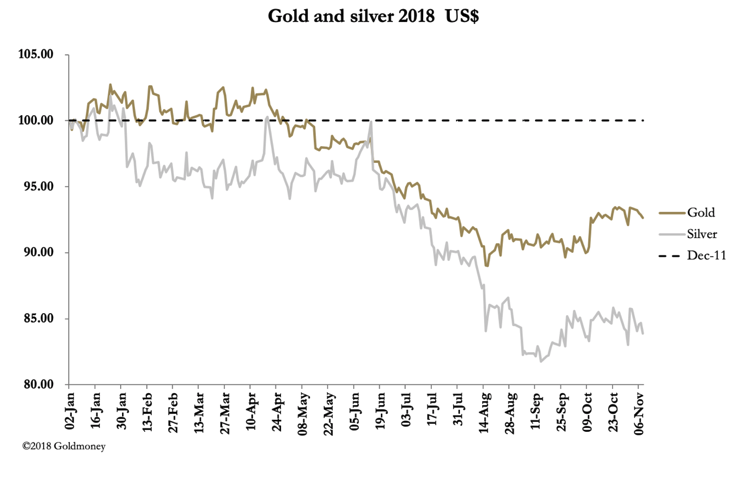 Looking at prices and volumes on Comex suggests that yet more shorts were created at the higher price levels. We can conclude this because open interest has been rising on higher prices and on down days, taking gold’s open interest up to 502,344 on provisional figures for yesterday. This is the highest level of open interest since 20 July, when the dollar was roaring and commodities, including precious metals, were collapsing.

Markets are still about the other side of the dollar trade. Our next chart shows the dollar’s trade weighted index. 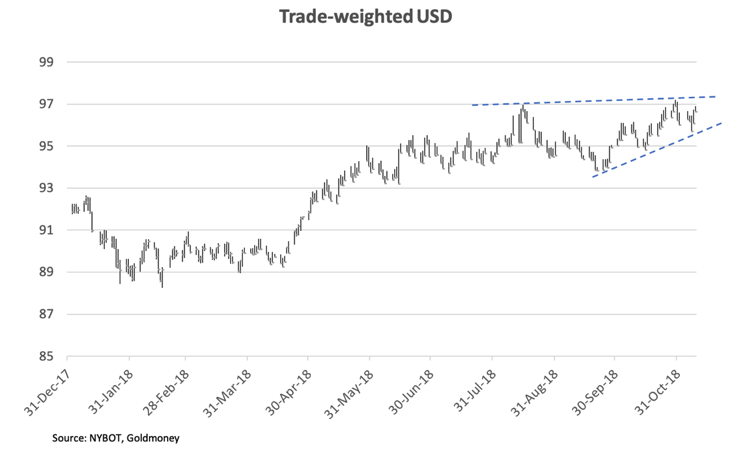 The TWI has rallied this week to 96.87, close to challenging the upper trend line, capped at just above 97. Technically, it looks like a potentially weak structure, unless the dollar can break above that level with real oomph behind it. Bear in mind that the whole financial world is already long dollars and short everything else, so it is hard to see where the extra buying required will come from.

That being the case, gold’s current weakness looks like being further consolidation, rather than much to worry about. Presumably, the commitment of traders report due for release after hours will still show highly oversold conditions for Comex gold. I shall relay this on my twitter @MacleodFinance when available.

So much for the technicals. This week saw the Democrats win the lower house, which despite President Trump’s calming comments, promises to be a thorn in his side. Could this lead to an attempt to impeach him in the New Year? The new political uncertainties appear to be ignored for the moment.

The FOMC statement, released yesterday, showed little change from expectations, with a December rate rise still expected, and the possibility of a further hike in March. This is encouragement to dollar bulls, who can arbitrage between euro LIBOR and T-bills for even greater returns. Bond yields rose again this week, with the 10-year US Treasury hitting a new high of 3.23%

In gold-related news, this week the Bank of England refused a request from Venezuela to return 14 tonnes of its gold, which creates a worrying precedent. The BoE, after all, is acting as custodian. It claims, according to The Times, to require standard anti-money laundering procedures to be carried out, something that never happens at an inter-governmental level. Other custodial clients with gold held at the BoE and at the New York Fed are bound to be alarmed at this precedent.

In physical markets, after net selling of physical ETFs every month since June, net inflows totalled 16.6 tonnes in October, according to the World Gold Council’s new Goldhub. Interestingly, demand came from North America and Europe, reversing recent trends, while Asia turned net sellers (-6.5 tonnes) thought to be on profit-taking related to the yuan’s sharp fall against the dollar.