Gold and silver moved sideways this week in moderate turnover, affected by America’s Thanksgiving holiday on Thursday. In this morning’s trading in Europe, gold was down $6 from last Friday’s close at $1456.5, and silver down 11 cents at $16.90. 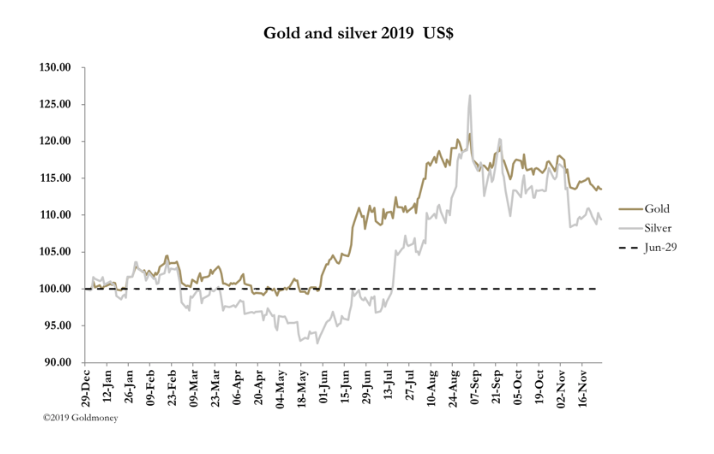 Last week I mentioned the large quantity of expiring December contracts due to be closed, rolled or stood for delivery by the end of this week. In an overbought market, the position was an invitation for market makers to mark down the gold price to trigger stops, which did not happen. Instead, on Tuesday, 128,245 December contracts were closed, and 109,128 February contracts opened while the price rose $6. This represents an exceptionally large rollover of about 100,000 contracts.

It must be admitted that Thanksgiving was a distorting factor, but nonetheless this tells us that the reason gold appears very overbought is not what one would expect: a large number of speculator longs all bought into the same meme. Rather, it is down to a whale, which if stripped out, would show gold less overbought.

The situation must be uncomfortable for the bullion banks ahead of their year-end, unless they are covered in the London forward market. But if that was the case, we might have expected more exchanges for physical over the last week or two, but apart from a slight pick-up to 15,876 contracts on Tuesday (the day of the big rollover) EFP activity has been subdued.

While this action in the paper markets is generally bullish, traders will be concerned that if what has become a traditional December bull run into the following quarter is to develop from current levels, it will doso from a high level of open interest, implying gold will be vulnerable to profit-taking. The next chart, of open interest shows it has declined somewhat from all-time highs but remains a concern.

In the physical market, Poland caused a stir by repatriating 100 tonnes from the Bank of England’s vaults, and other Eastern Europeans are also adding to their gold reserves. A former Slovakian premier is forcing the issue of her gold reserves at the BoE, claiming it is not safe there, because of Brexit and history has shown that allies can hardly be trusted. Furthermore, ex-Premier Fico cited a possible economic crisis, and he could have added that the BoE recently refused to deliver Venezuela its gold, a serious breach in its custodial duty.

The East Europeans have seen the downside of socialism and are less Keynesian perhaps than their Western neighbours, valuing gold more. Their Eastern neighbours certainly value gold, with Russia aggressively building her reserves and China now dominating the global bullion market.

China’s cold war with America took a new turn this week, with President Trump signing into law further restrictions against Hong Kong. So far, China has rolled with the punches, assuming the dollar as the reserve currency will quietly die. But America’s overt aggression on both trade and Hong Kong is increasingly likely to provoke a more serious response. The tension increases, which could be an important factor for gold next year.