This week has seen highly volatile equities (mostly down), bond yields sharply lower, the oil price hard down, and gold side-lined but recovering after a miserable month or two.

On the news front, the S&P rating agency reminded us that Greece is likely to default, Germany released some horrible industrial production numbers, and the Federal Open Market Committee unexpectedly released dovish minutes. So what's it all about?

This week more than any other it became clear that the global economy is stalling, with the threat of outright recession in the Eurozone and Japan affecting other economies. And in the US, while much is made of an improving jobs scene, the fact remains that in relation to the size of the workforce there is a greater percentage of working-age people not employed since the 50’s era of the male dominated workplace.

This is creating a two-way pull for gold and silver. Declining commodity prices coupled with a strong dollar have hit both precious metals hard since mid-August with gold falling $130 at worst, and silver having been in continual decline since mid-July. However, both metals have become oversold and as a result have bounced firmly off support at $1180 and $16.75 respectively. The chart below is of gold from its all-time high and its 200-day moving average. 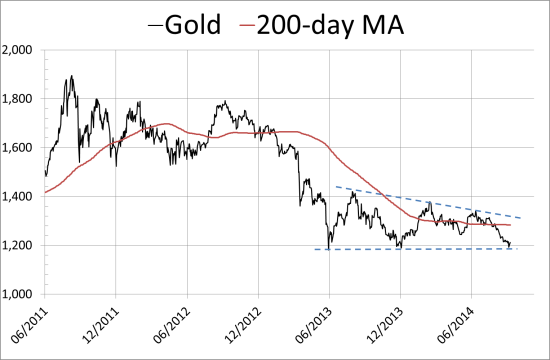 Bulls hope that gold has formed a triple-bottom pattern, which if true suggests the subsequent move will be strongly upwards. However, triple-bottom patterns are uncommon and often turn out to be flag patterns, or consolidations in a continuing bear market. We will need to see gold trading convincingly above the 200-day moving average (currently at $1283) for confirmation the market has turned. Until then the computers that trade to programmed formulae are likely to remain on the bear tack on the basis that the downtrend is still in place.

These bears include analysts who either think that next year US interest rates will rise, which is seen to be bad for gold, or alternatively see a deepening recession leading to a stronger dollar, measured against other currencies. When the FOMC came out with minutes postponing rising interest rates, gold and silver were the best performers in the commodity complex.

Those who think rising interest rates are bad for gold forget that during the 1970s interest rates rose over the decade and gold also rose from a low of $36 in June 1970 to over $800 at the end of the decade. And those who think falling prices seen in a slump are bad for gold forget that in 1934 the price was raised against the dollar by 69%.
Meanwhile this week's rally in platinum and palladium has been spectacular at 8% and 7% respectively.