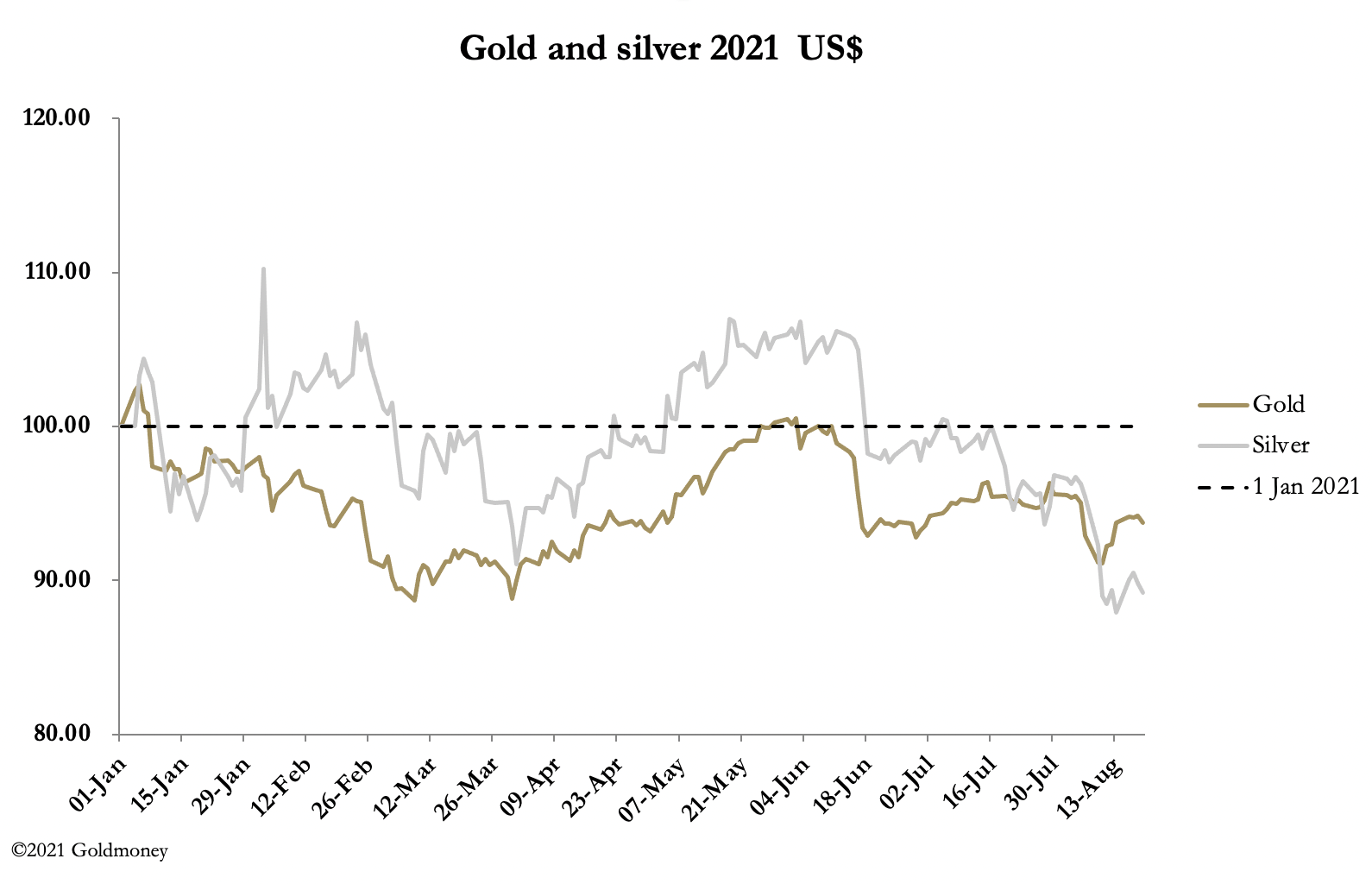 This week, gold consolidated the gains of the previous week after the dramatic sell-off on 6—9 August. In European trading this morning, gold was at $1785, up $5 from last Friday’s close. Silver was relatively weak at $23.20, down 60 cents on the week. This has led the gold/silver ratio to rise to 77, which is our next chart 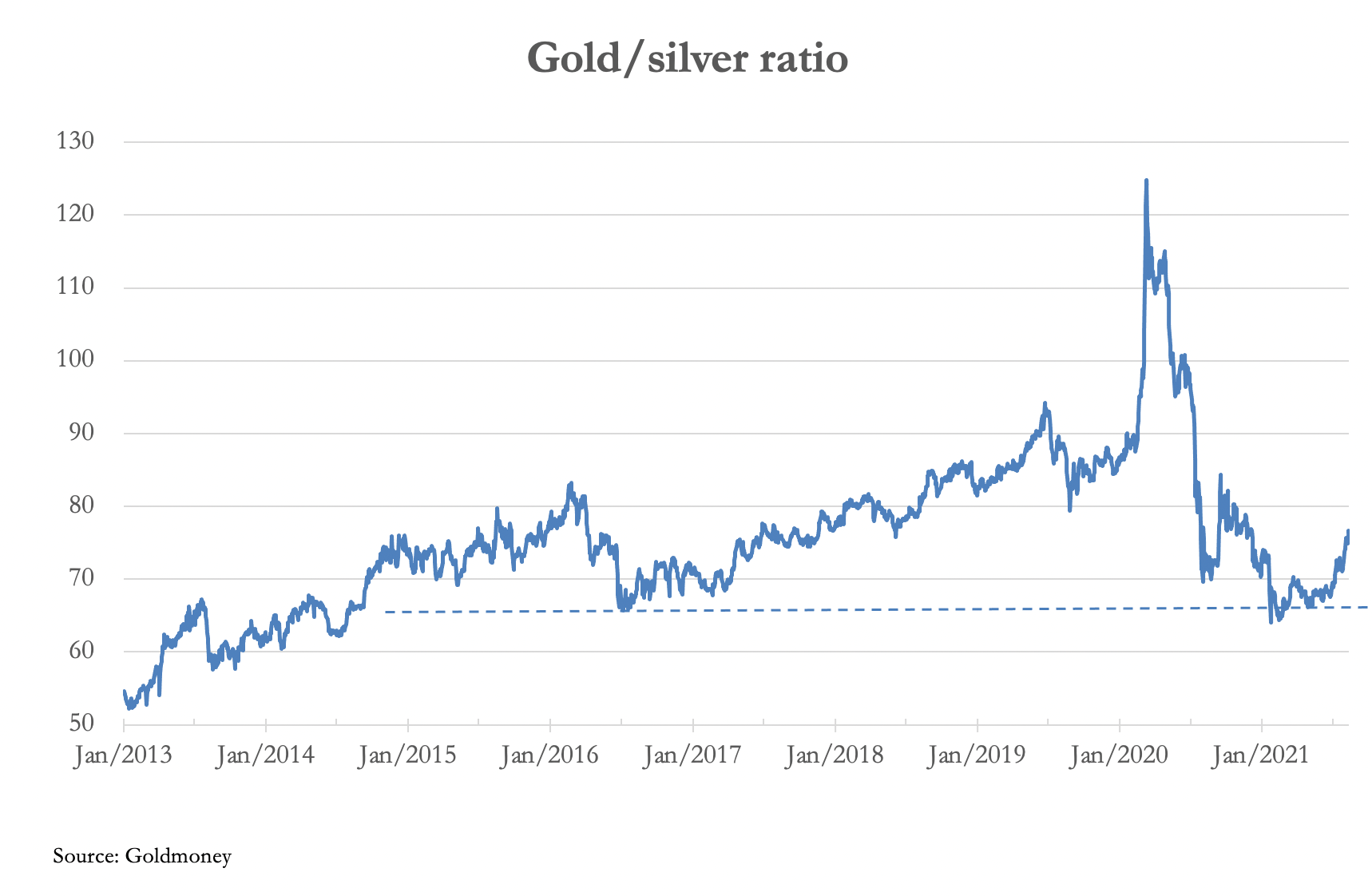 Having approximately halved from the record 125 in March last year, it had been a profitable run for silver, which, along with base metals, now appears to be consolidating. But fundamentals such as accelerating “green” demand and restrictions on mine output growth suggest that silver prices are unlikely to drift lower much from here. The key, as always, will be ETF demand from investors.

The downside of the orchestrated RobinHood fiasco in January, when silver bulls encouraged small speculators to buy ETFs and put a squeeze on the physical market was the creation of weak holders, who have been liquidating their failed positions. This leads us to consider the Swaps position, which is our next chart.

At net short a modest 10,388 contracts (51.94 million ounces) the Swaps can afford to relax. Furthermore, the short side is dominated by producers, mostly mines over half of which produce silver as a by-product. Of the total net shorts, the swaps account for only 23% and the Producers 77%.

Gold is different, with the split 78% Swaps to 22% Producers. This explains the relative firmness of gold to silver. And it partially explains why gold has held up better this week despite a firmer dollar, whose TWI is up next. 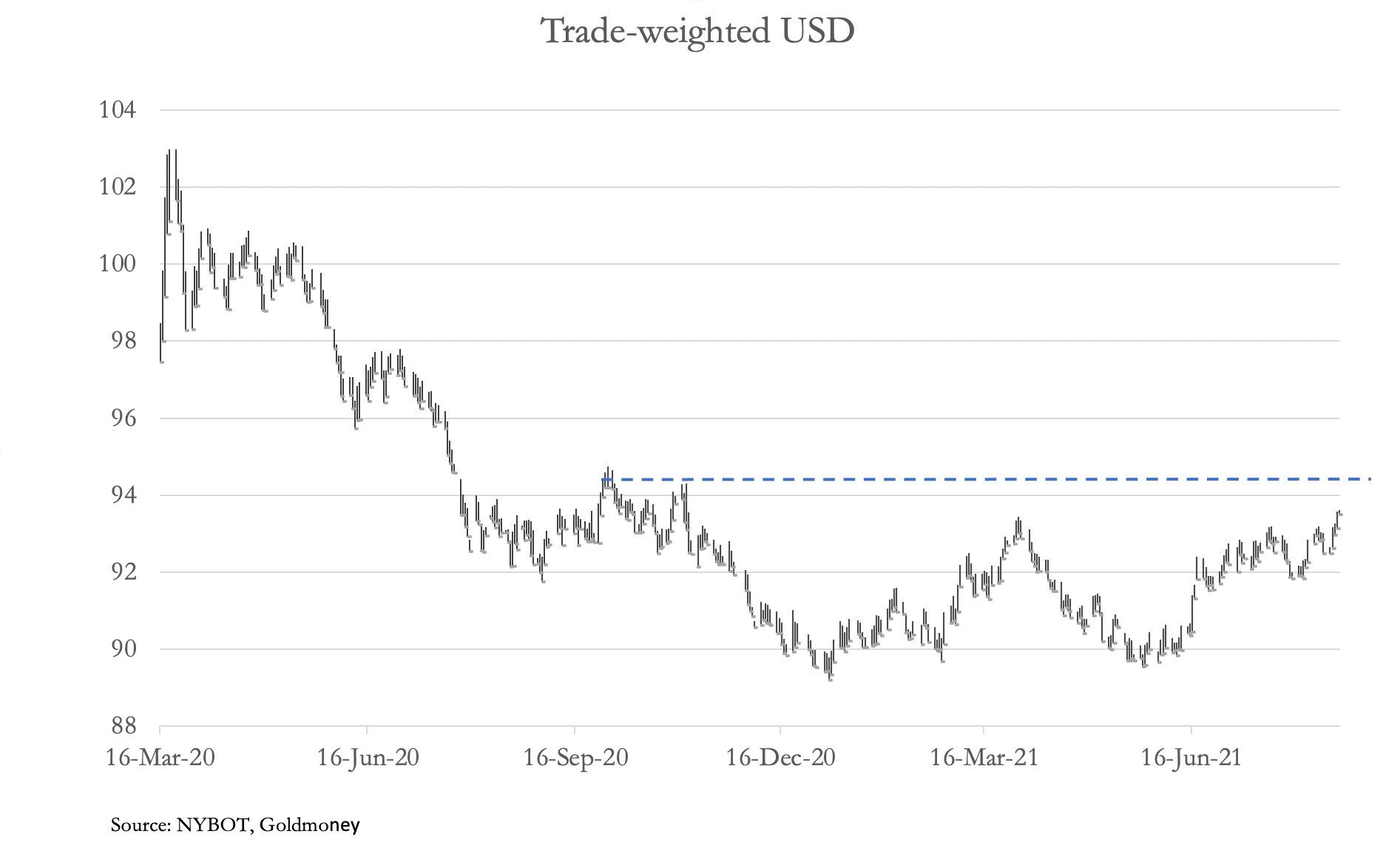 Having marginally exceed the March 2021 high, the chart suggests that a bigger hurdle is 94.25, shown by the pecked line. But the problem with the TWI is it is overweighted in euros. And being the reserve currency, the dollar is followed in terms of its relative purchasing power by all others. A wider commodity index is a better guide, and that’s up next. 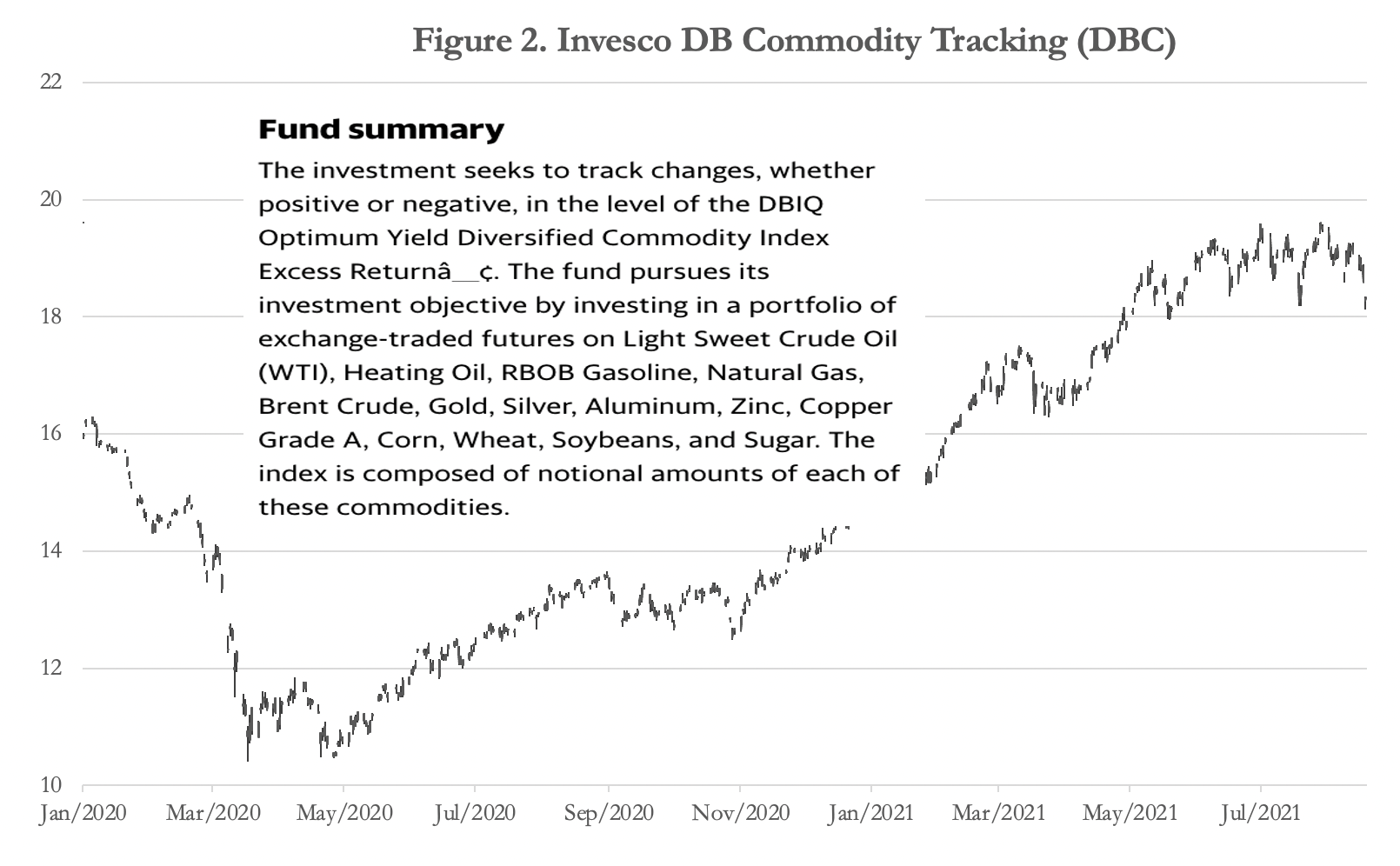 Using DBC as a proxy for commodities, we can see that they have been in a consolidation phase since May. It looks like the 18 level is firm support, so the downside from here appears limited.

Driving this consolidation is growing fears that after a post-covid bounce, the US and other economies are stalling. This is reflected in bond markets, where the yield on the UST 10-year bond has fallen by over 0.5%. 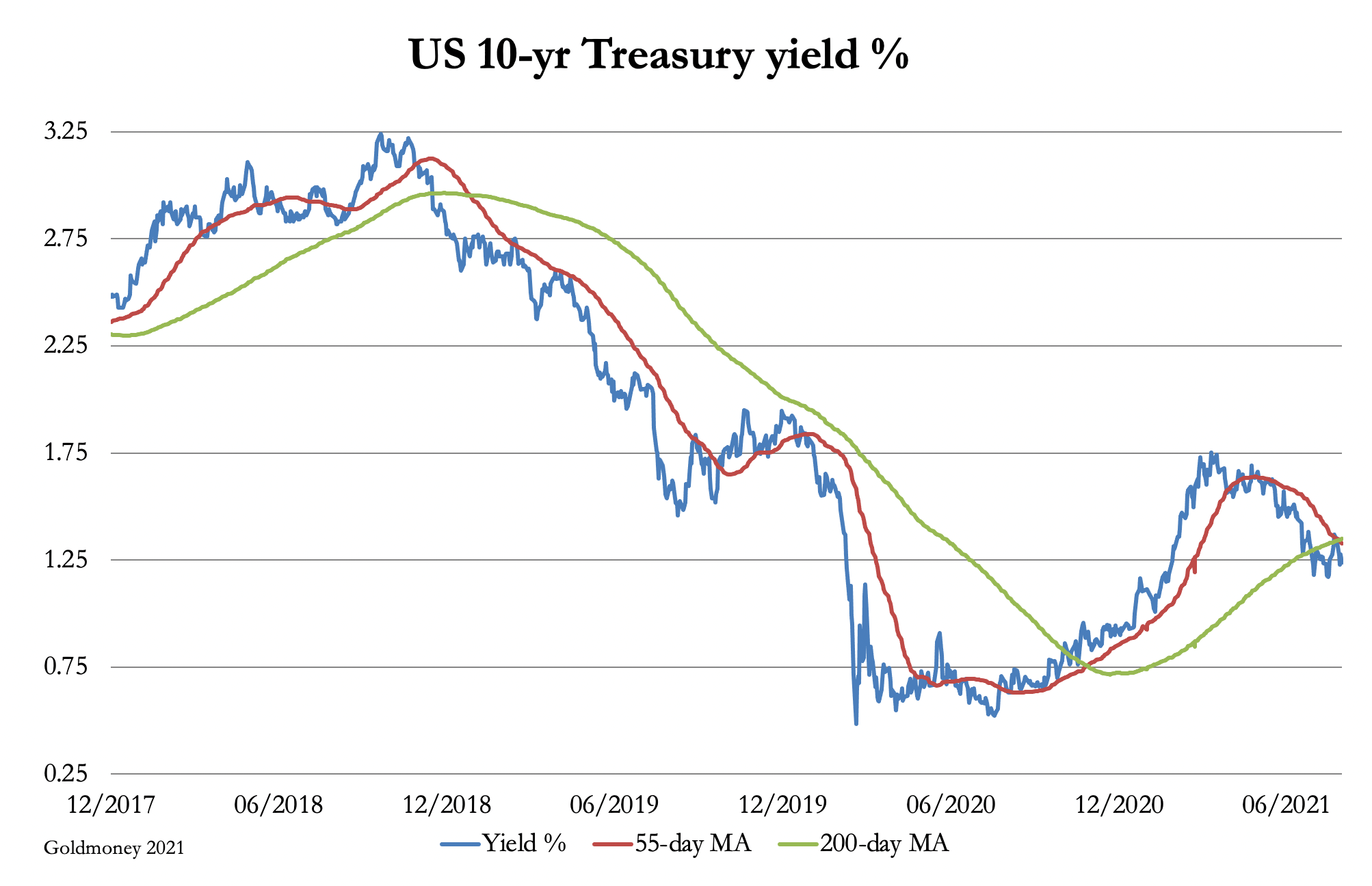 With its yield showing a death cross and commodity prices on pause, markets are reflecting fears of deflation instead of inflation. It is a black or white choice which drives Neo-Keynesian analysis. But it ignores inflation as the driving force in an economic slump, as evidenced in every hyperinflation of fiat currency.

Meanwhile, the bullion banks, which are advised in the main by in-house neo-Keynesian economists, will be keeping their fingers crossed that growing signs of deflation, leading to a higher TWI for the dollar, falling UST bond yields and stalling commodity prices will rescue their short positions in gold derivative markets.