By Alasdair Macleod
Market Updates May 20, 2016 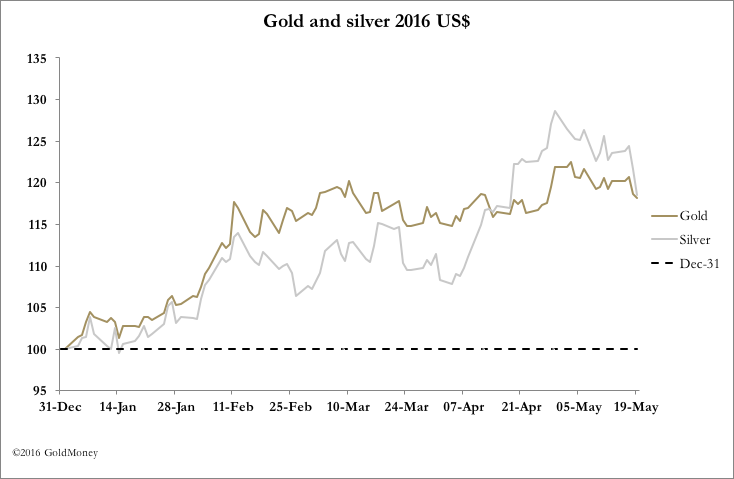 Gold and silver had a down week, correcting some of their overbought condition.

Having been massively overbought in the futures market, it is hardly surprising that a correction of some sort has occurred. The correction was given added impetus when the Fed’s FOMC minutes were released, which caught complacent markets on the hop. It was generally expected that there would be no rise in interest rates following the June meeting, but these minutes were more hawkish. So much so, that unless there is a definite turn for the worse in the economy, it appears that the Fed funds rate will be raised in June, by one quarter of one per cent.

The result was US Treasury yields rose, and equities fell, with the S&P 500 Index sliding below the 2,040 level, breaching this technically important level. China didn’t help, because she devalued the yuan’s official fix the following day, a move that is best described as a forced revaluation of the US dollar, reminding investors of the time the PBOC did this last August. That move led to a nasty fall in global equity markets.

It therefore appears that the Fed is being controlled to a degree by the PBOC’s foreign exchange interventions. China is trying to manage a deflating credit bubble, and appears to have taken the view that she would rather have interest rate and currency stability while this happens. This is because she wants capital to be reallocated from legacy export industries to businesses dedicated to the Chinese consumer. Presumably, she does not want to see a weaker currency lending support to those legacy sectors. A possible threat to her plan is rising US interest rates at this critical juncture.

But there is another larger problem that appears to have been glossed over in the FOMC minutes, and that is price inflation expectations as measured by the CPI. The input from commodity prices has dramatically reversed in recent months, and it can be expected to drive the CPI higher more rapidly than consensus forecasts expect. This may be because US economic data and business surveys indicate a softening economy, so analysts do not generally believe the recent recovery in commodity prices will continue. If they do continue their recovery, it will be because of a fall in the purchasing power of the dollar, rather than an increase in manufacturing demand. This is a tough call for analysts who naturally understand price changes that emanate from commodities, and fail to identify changes that come from the currency.

If the purchasing power of the dollar is being called into question, then commodity and precious metal prices will benefit, after the short-term shock of a change in the interest outlook has been absorbed. Another way of gaining perspective is to look at a chart of the gold price, and this is the next chart. 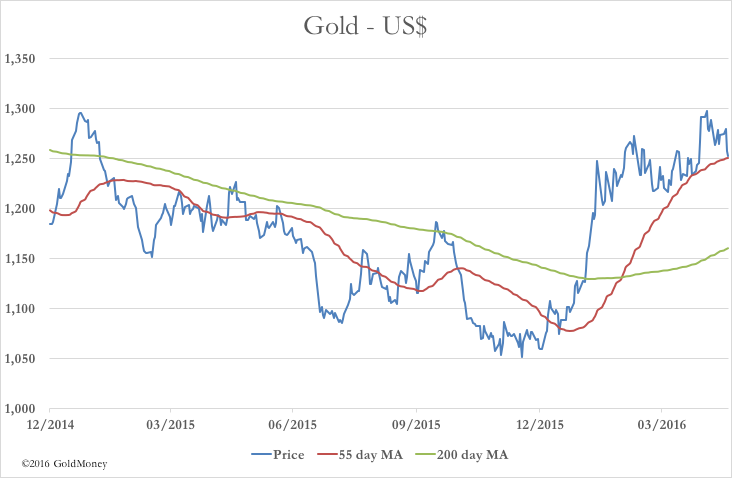 Returning to our opening theme, it becomes obvious that after a run up of $250 from the December lows, some price consolidation would be natural. The consolidation so far has only been relatively minor, testing the 55-day moving average currently at $1250, with real support coming in at the $1200 level.