Gold and silver continued recent weakness, with prices stuck in a narrow trading range. Gold Was down $5 in European trade this morning (Friday) from the previous Friday’s close at $1210. Silver is up six cents over the same timescale at $15.38. 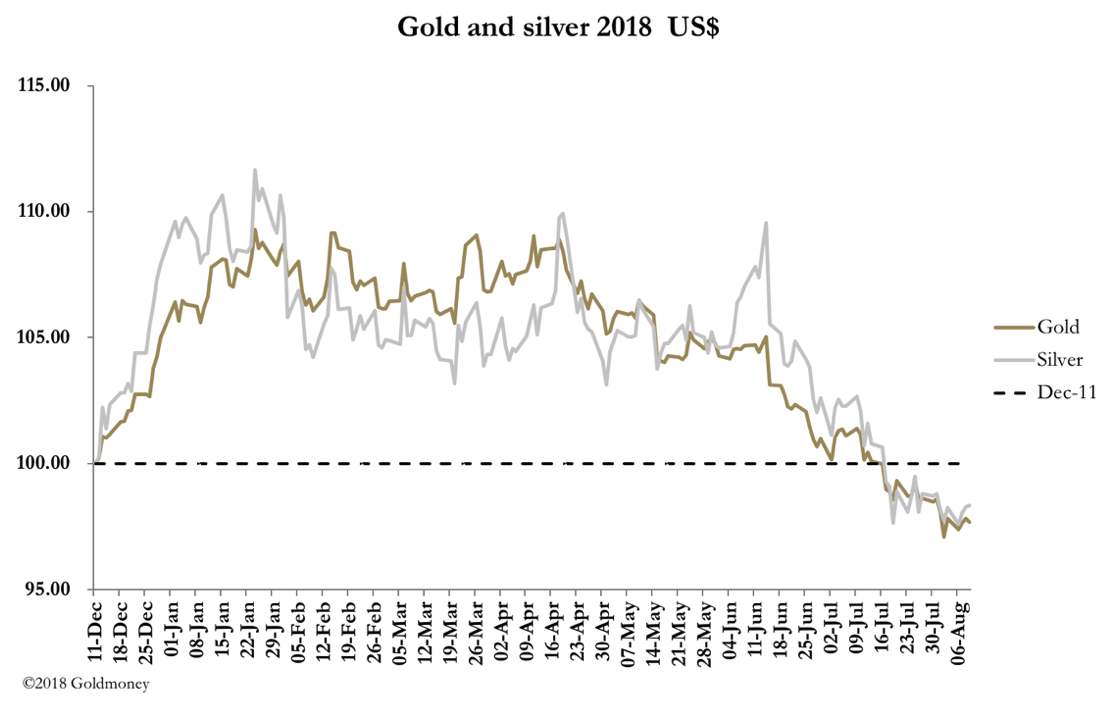 Trading on Comex has been subdued, with gold’s open interest distinctly average. However, these benign figures conceal a record net short position in the hedge funds of 42,528 contracts. This is put into the historical context in the next chart. 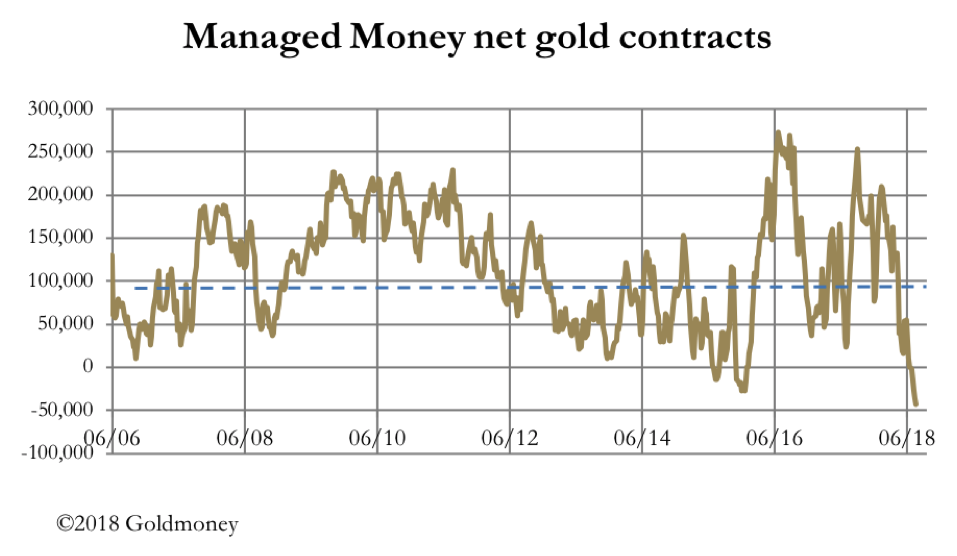 The dotted line is the average net long position over time, illustrating how extreme the hedge funds’ stance has become. The Commitment of Traders figures, on which the chart is based, will be updated for the position last Tuesday after the market close in New York tonight, but a cursory glance at how trading has progressed suggests there will be little change in this market imbalance.

Silver is a little more interesting, because open interest is high. The Managed Money category is also net short of Comex silver, at 7,942 contracts. This is unusually oversold, but less than the record, which was set last April when this category of speculators was net short of 40,338 contracts. However, this month the active September contract is running off the board, which means 150,000 contracts (62% of total open interest as of last night) will have to be rolled into December or closed. The implication is that more speculator shorts than longs will have to be closed or rolled forward, suggesting an underlying bear squeeze is taking place. If the dollar weakens, and/or more specifically base metals rally, the squeeze could turn vicious.

Warehouse stocks for copper and the other major base metals are at cyclical lows, a serious imbalance given China’s determination to upgrade her infrastructure and that of her Asian allies along the silk roads. Therefore, it appears that not only is the whole metal complex at cyclical lows, but the recovery from them can be expected to be significant and sustained.

With respect to the dollar, its trade weighted index has recovered 50% of its 2017 bear market, a normal correction perhaps. Recently, attention in currencies has swung from the euro to the yuan, which since April has fallen by 9% against the dollar. Wild rumours are circulating in Western media, even to the point where the Chinese leadership is said to be split on trade policy. In reality, this is never allowed to happen.

We should look at the currency issue from the Chinese standpoint. Given that President Trump is pushing a tariff war, it seems reasonable to compensate China’s exporters by pushing the yuan lower, while at the same time disadvantaging American imports. Furthermore, China has substantial dollar reserves which she wants to sell in the longer term. A lower yuan opens this possibility.

Lastly, in this week’s Insight, I show that foreign ownership of dollar investments, including over $4 trillion of cash, is dangerously high. This is at a time when mainstream opinion in capital markets is that everyone still needs more dollars. The hard statistics on foreign ownership contradict this view, and so it will only be a matter of time before these imbalances are corrected, and the dollar slides.