Market Report: Gold was the safe-haven this week

This week, precious metals continued their recovery, with gold up $35 at $1220 and silver up about $1 at $17 this morning, thus building on the improved trend since gold bottomed nearly $90 lower at $1132 on 7 November.

Gold seems to be finding support at the 50-day moving average (MA), which currently stands at $1198 and now rising. The 200-day MA is at $1246, which suggests supply at this level could cap the rise for the moment: these levels matter to technical traders. On Comex there is evidence of some buying of gold futures, as opposed to bear closing, which is reflected in the rise in net contracts for the Managed Money category shown in the chart below. 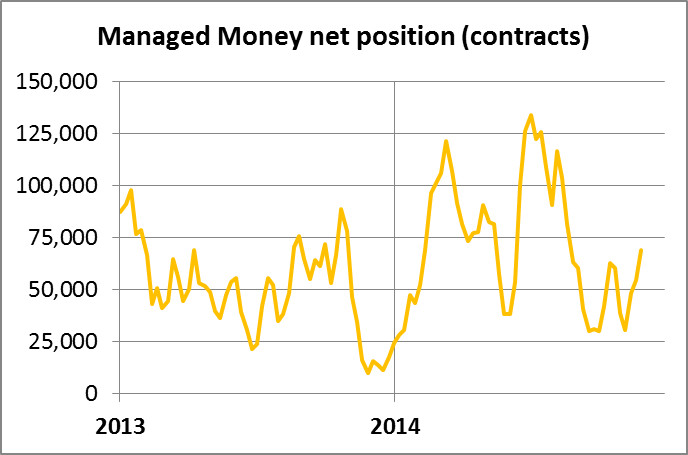 This net long position at 2 December is still on the low side, compared with an average of 115,000 contracts net long over the last eight years, telling us that despite a rise of $90 in five weeks, there are still buyers out there yet to buy. Silver tells a similar story.

Market attention was not so much on precious metals this week, but on volatile markets nearly everywhere else: oil, currencies, stocks and bonds. Oil is a disaster, Brent having fallen over 9% on the week. In currencies, the Japanese yen weakened to just under ¥122 to the US dollar, close to the ¥123 level some major traders think the yen's collapse could become unstoppable. Instead, probably with official intervention it strengthened on Wednesday and Thursday by over 3.5%, a big move for a major currency.

China decided to rein in interbank lending to stop banks circumventing credit controls, which hit Chinese equity markets hard, with the Shanghai Composite Index falling 8% on Monday and Tuesday before recovering somewhat. And the Athens stock market suffered its biggest fall since 1987, falling 20% after a snap presidential election was called that could threaten EU unity. Volatility in other equity markets has been high as well, with big falls from Monday to Wednesday being partially retraced subsequently.

It is worth mentioning these moves, because until recently capital markets would have marked gold and silver down on the pretext that bonds are the preferred safe haven. Gold is now performing well at a time of exceptional dollar strength, which is the opposite of how the relationship has worked for some considerable time and bodes well for a rally into the New Year, so long as it doesn't get knocked for year-end valuations.

In other news, Chinese wholesale demand last week was 38.36 tonnes, down from 53 tonnes the week before. This may have been due to the tightness of supply in London when gold forward rates were negative.