Gold rose strongly towards the $1350 supply level, before backing off on Wednesday afternoon EST on the FOMC statement. From last Friday’s close, gold was up a net $1 at $1322 by early European trade this morning, having tested $1347 intraday on Wednesday. Silver was up five cents on the week at $15.85. 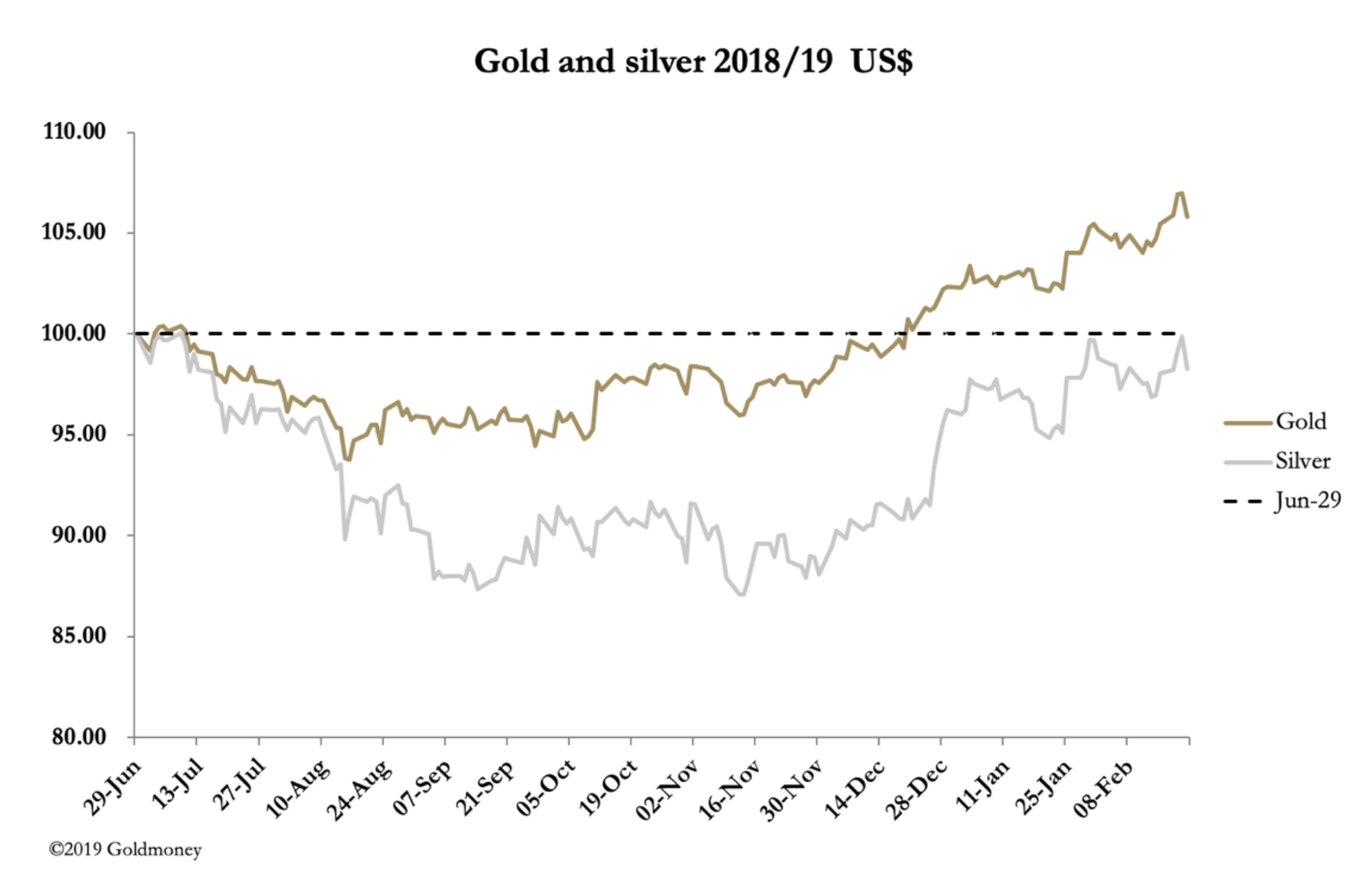 It was a public holiday in the US and Canada last Monday, but despite that there were notably high volumes in the Comex gold contract from Tuesday onwards. In the absence of Commitment of Traders numbers (they are still being brought up to date following the US Government shutdown) we do not know position details. However, it is reasonable to assume gold is overbought, having risen as much as $150 from record oversold conditions in mid-November. A pause is only to be expected.

The next chart illustrates the technical position. 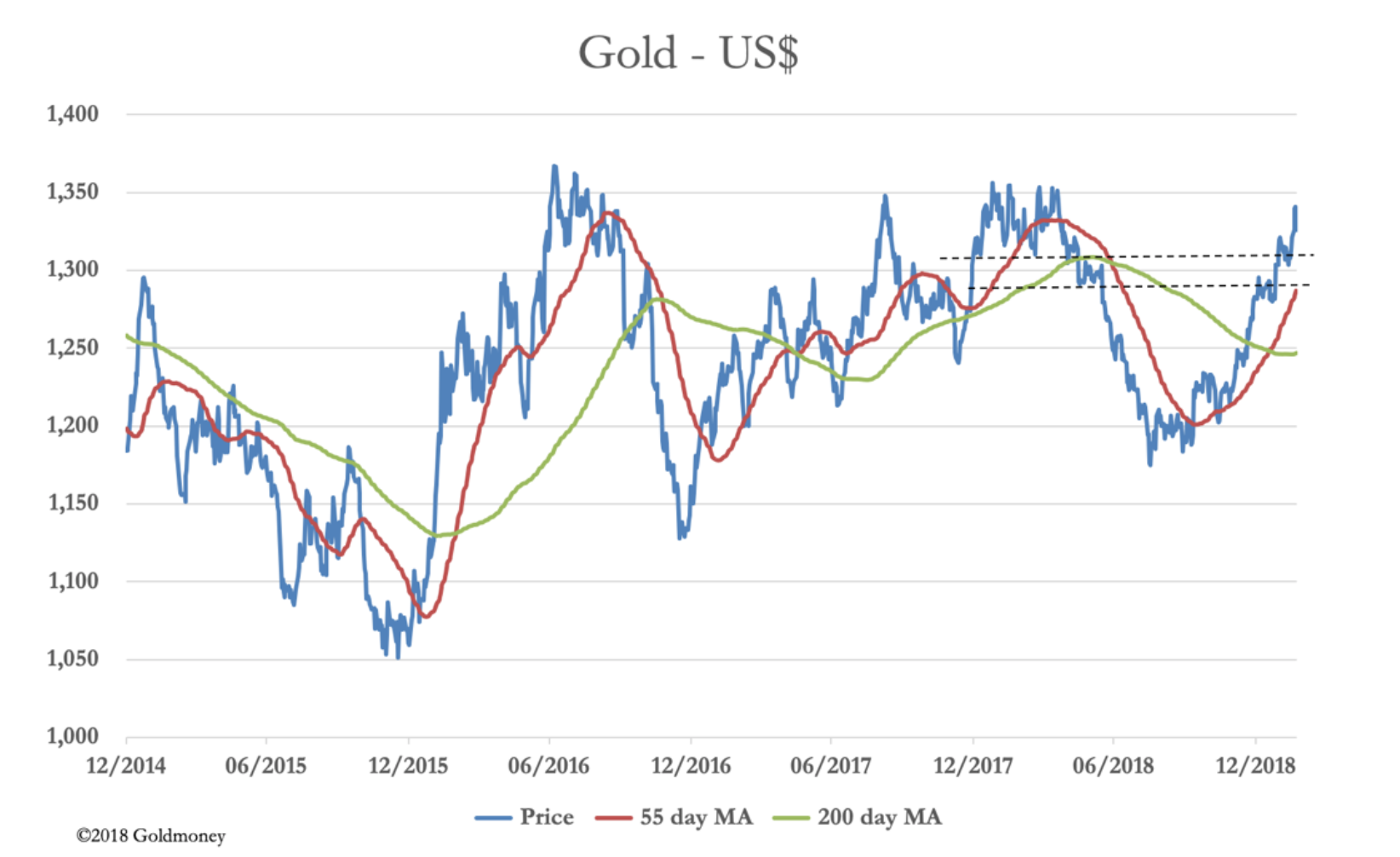 The technical position is positive, with a golden cross on the moving averages and the price bullishly aligned. Supply between $1350-65 is a challenge, and traders would expect to see some consolidation before an attempt to overcome it.

Therefore, the expectation will be for the price to test previous resistance, shown between the pecked lines. However, the downside is likely to be limited by the rapidly rising 55-day MA, currently standing at $1287 and gaining nearly $2 every trading day.

Physical markets appear to have been squeezed by large buyers (presumably central banks and sovereign wealth funds) which were taking the opportunity to accumulate bullion at lower prices. The next chart, indexed to end-June 2018, shows what ordinary investors have being missing. 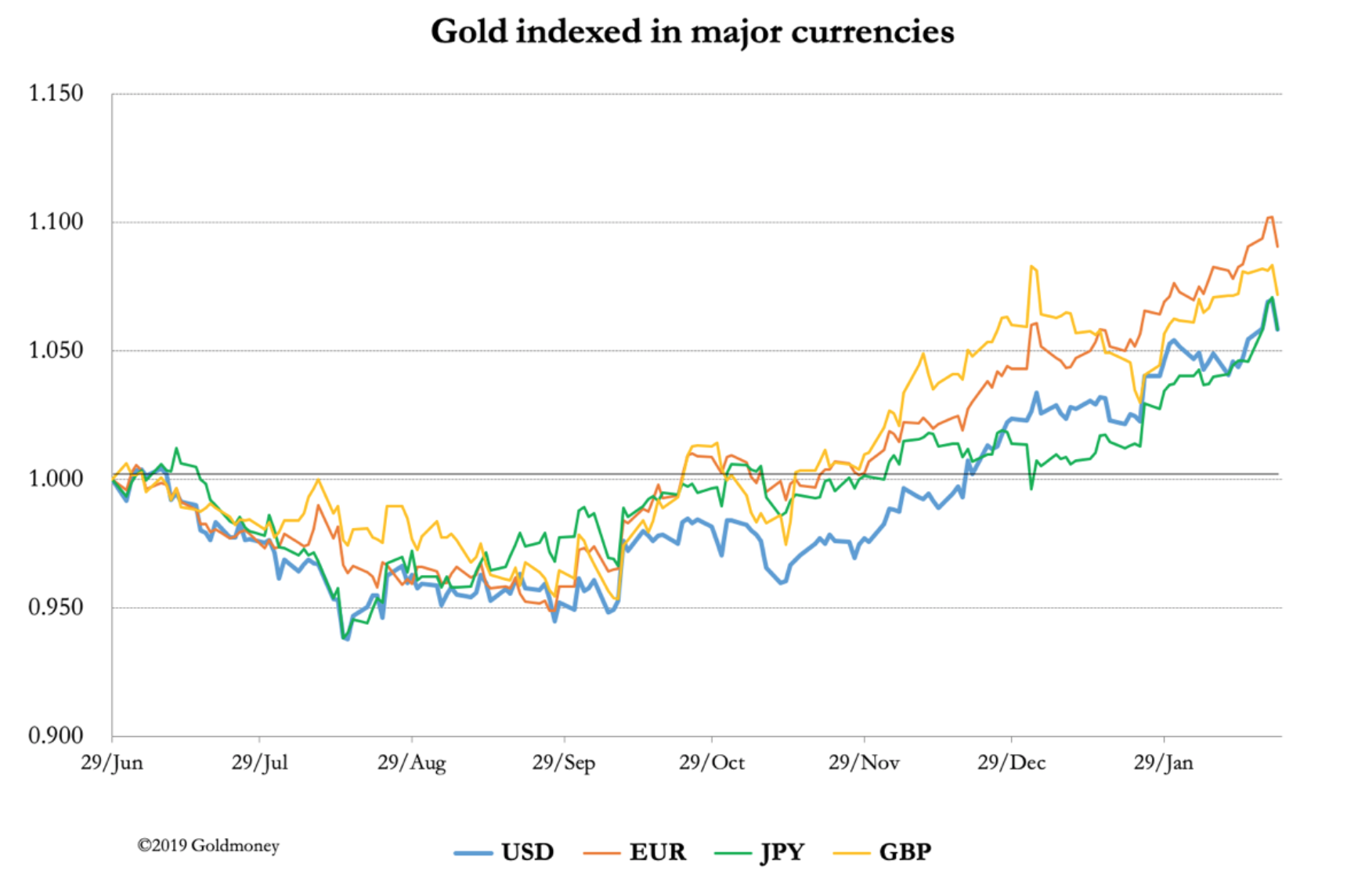 Financial markets generally now appear to have gone on hold, with uncertainty over economic prospects for 2019. It is clear from statistics that GDP growth has gone, and that there is a significant risk of a global recession. Therefore, inflationary attempts to revive GDP growth are likely to be renewed.

This being the case, prospects for the gold price are attractive. Doubtless, much of this has been discounted in the price rise of recent months. For now, expectations are that this stimulus will work, which is why equity markets are enjoying a reasonable rally. Equally, it brings a wait-and-see attitude to gold. As revealed on Wednesday, the Fed’s FOMC is sitting on the fence instead of rushing to judgement, which is why gold fell.

However, a little-noticed announcement from the US Treasury in its TIC data was the liquidation of a net $91.4bn in US dollar investments by foreigners last December. The reason this is important is twofold. First, dollar flows are the consequence of trade, and this could confirm a sharp decline in US trade flows. More data will be needed to confirm it.

And secondly, the US relies on foreigners to fund its deficit, which no longer appears to be happening. An early warning of trouble ahead for the dollar?