Last Monday gold ended a week-long consolidation that saw it fall from $1354 to $1329, before rising strongly to over $1370 yesterday. Not only is Asian demand still outstripping mine supply by a large margin, but physical ETFs such as GLD are now beginning to see more buyers than sellers, and so are no longer a source of supply.

Gold has also decoupled from the risk-on/risk-off nonsense of the last few years. While other risk assets such as equities have fallen sharply, gold has risen, and it has also risen while other metals, notably copper, have fallen sharply. Also of note is growing confusion in currency markets, with the fundamentally flawed euro, heavily dependent on Russian energy, being the strongest of the major currencies.

Silver has underperformed perhaps with half an eye on industrial metals. It retreated from last month's high of $22.15 to a low of $20.60 last Monday, before rallying with gold over the rest of this week to $21.15 last night. Gold is therefore up while silver is down by about 4%, and the chart below which is of gold and silver rebased to 24th February shows this strong divergence. 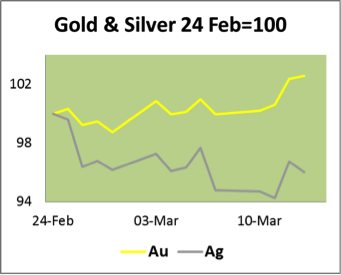 Russia and NATO are playing a game of financial chicken over Ukraine, which is deeply concerning. Russia appears to have calculated that the West would not dare to precipitate a financial and trade war with the largest exporter of energy on the planet. However, it appears that the West is ignoring economic risks: Russia is not be permitted to invade a sovereign territory next to the EU's border, so it's political principals before money. To make the situation considerably more serious, China has weighed in on Russia's side, as she was bound to do as co-founder with Russia of the Shanghai Cooperation Organisation.

The point is not lost on those interested in gold: it amounts to a financial war between long-time bulls in Eurasia, and long-time bears in the West. All the golden cards are held by China and Russia while we Westerners have none. This is why buying interest is initially focusing on gold rather than silver.

This Sunday the Crimea is holding its referendum, and there is little doubt about the outcome. Perhaps the West's strategy is to scare voters into voting to stay with the Ukraine. If so we can hope the financial rhetoric will die down afterwards whatever the outcome, because a financial war would be extremely damaging to the global economy.

Equally serious are the growing signs that China may be the verge of a credit crisis, which would probably unleash a flood of money in favour of gold. My weekend article goes into the dynamics behind and the likely consequences of this event.

Here is next week's calendar.