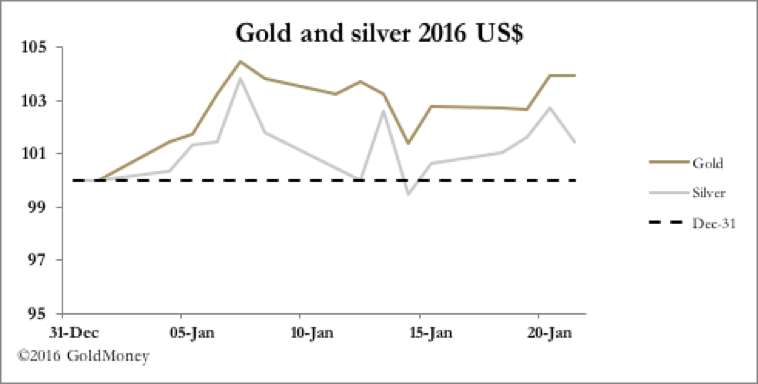 Gold and silver had a better week, before yesterday afternoon (Thursday), when gold steadied and silver slid 20 cents back below the $14 mark.

However, in early European trade this morning gold was level at $1097 and silver slightly better at $14.07. This was relatively subdued, given that US crude oil dropped to under $28 at one point this week, but recovered to $30.60 per barrel this morning. However, the real action was in equities.

The contrast between the soothing tones of the great and the good at Davos, and the carnage in equity markets was as if Davos is a village on another planet. The Dow at its worst was down 2,000 points since 31 December, and there were big falls on all equity markets. The yield on government bonds dropped, indicating that deflationary forces now dominate markets.

The situation is not helped by dollar strength, dramatically reflected in sterling which has dropped to multi-year lows. Other currencies, particularly the rouble, are also hitting new lows. The result of currency moves is that gold priced in the other major currencies has actually performed reasonably. The next chart is of gold indexed to end-2013. 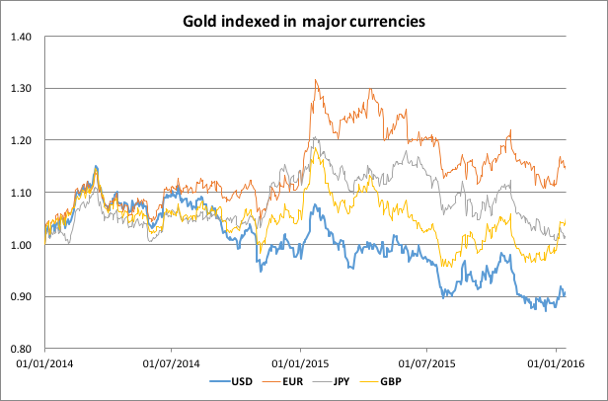 Gold is a grave concern to western central banks at a time of considerable market uncertainty on two counts. Firstly, a rise in the gold price is seen to be evidence of growing worries about the financial system, and therefor to be discouraged. And secondly, with the bullion banks unable to obtain physical cover for their gold liabilities, a rise in the gold price could easily become self-feeding. The Fed in particular, with its responsibility for the reserve currency, will be acutely aware of the risk physical gold presents for the entire fiat money system.

This is why the short position in futures markets is important. The next chart shows the futures position of the second division of bullion banks, represented by the Swaps category on Comex.

At first sight, there is no problem, with swap dealers net long of 8,230 contracts, bearing in mind that the average net position since 2006 has been about -50,000 contracts. Unfortunately, on the other side of the deal are the hedge funds, which is the next chart.

In this chart we are looking at a longer time scale to show how the hedge funds have progressively reduced their net position so that they too are more or less level as a category. Then we look at the gross short position for this category, because this is where the trouble will start. 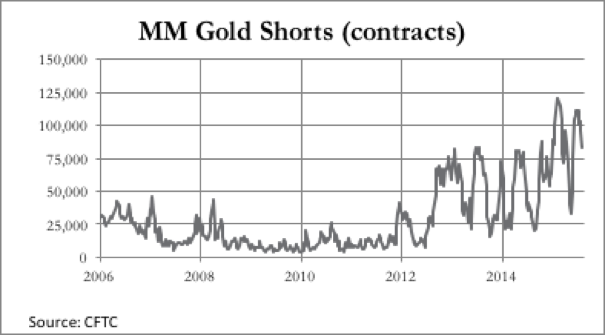 The short position is extreme on any historical basis, which is why the net position is so low. Now imagine what happens if there is a systemic shock: 83,000 contracts will have to be bought back, and there is not the liquidity in the swaps to accommodate it. We have a classic situation, where after years of profitable trading on the bear tack, the futures market is not in a position to handle a change in trend, without incurring some serious losses. The swaps would be forced to hedge their short positions in other markets, which will lack liquidity on the upside.

This is why both central banks and bullion banks are keen to keep a lid on the gold price, but things are going awry in markets for regulated investments, starting with equities, which suggests that the time when this control over the gold price ends is approaching.