Gold has now rallied over 10% since December 31. This, in the words of one analyst who achieved widespread publicity was meant to be "a slam-dunk sell". Instead, gold has soared through its 50-day moving average as well as the 200. Furthermore, the 200-day is itself turning round and will shortly be rising. Technical analysts are beginning to think about a trend reversal signalled by a "golden cross", with the 50-day moving average crossing above a rising 200.

The news background this week has been remarkably dull, with minor currencies consolidating against the US dollar along with equity markets. Risk investment has been marginally favoured, and gold could have been expected to decline. Instead precious metals have outperformed everything else, rising $50 on the week.

There is a developing problem in the market which is underwriting precious metal prices. We know physical supplies are tight, with record demand in Shanghai (256 tonnes delivered in January) and London's GOFO rate has turned negative again out to three months. The shortage of physical bullion and the better price trend are happening with a high level of short positions for the trend-chasers who are generally committed to a continuing bear market. The charts below are short positions of the Managed Money (hedge funds) category on Comex. 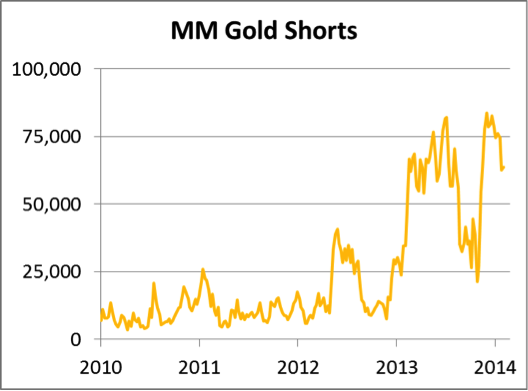 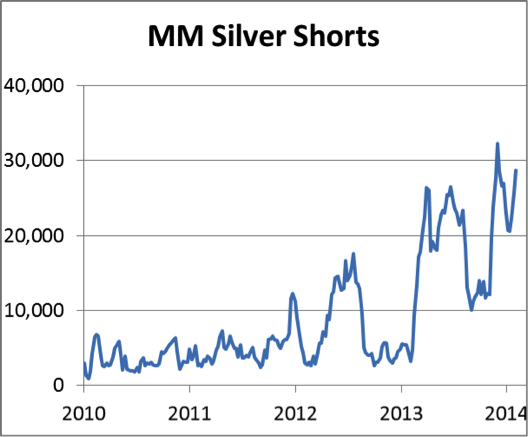 The historic average of gold short positions is normally less than 15,000 contracts, whereas at the beginning of this month it stood at 63,755 contracts. Silver is worse, with 28,715 contracts short in an illiquid market, and a long-run average of only 5,000 short. Someone is going to have to supply long contracts to allow hedge funds to close these positions.

"Houston, we have a problem". The Bank Participation Report (BPR) for February 4th shows the aggregate of four US banks net long of gold contracts, while 22 non-US banks are together short of 30,108 contracts. Anecdotal evidence is that the US bank longs are concentrated with one major bank. This one bank will find it profitable to squeeze the others with their short positions. This leaves no one to provide exit liquidity for the hedge funds.

In silver the position is equally delicate. The hedge funds increased their short positions after the January rally, which was the wrong thing to do (see the chart above). The BPR shows both US and Non-US banks net short of 28,200 contracts between them in equal measure, almost the same as the hedge funds' shorts. A rallying silver price becomes a simple squeeze on the banks and the hedge funds at the same time as they both scramble to cover the equivalent of 285 million ounces of silver.

Gold and silver's improved technical position is turning what was judged a slam-dunk sell into a nightmare on Comex for those that following last year's downtrend. And as long-term bulls begin to realise that they have missed the market bottom and start piling in, prices could move sharply higher, given the lack of underlying bullion. The effect on the silver price is likely to be the more dramatic of the two because of its poor liquidity compared with gold.

Here are next week's expected announcements: