By Alasdair Macleod
Market Updates January 18, 2019
Both gold and silver are still consolidating recent gains. Gold this week has sold off a little in European morning trade to lose $2 on the week at $1285.50, and silver is down 15 cents at $15.46. 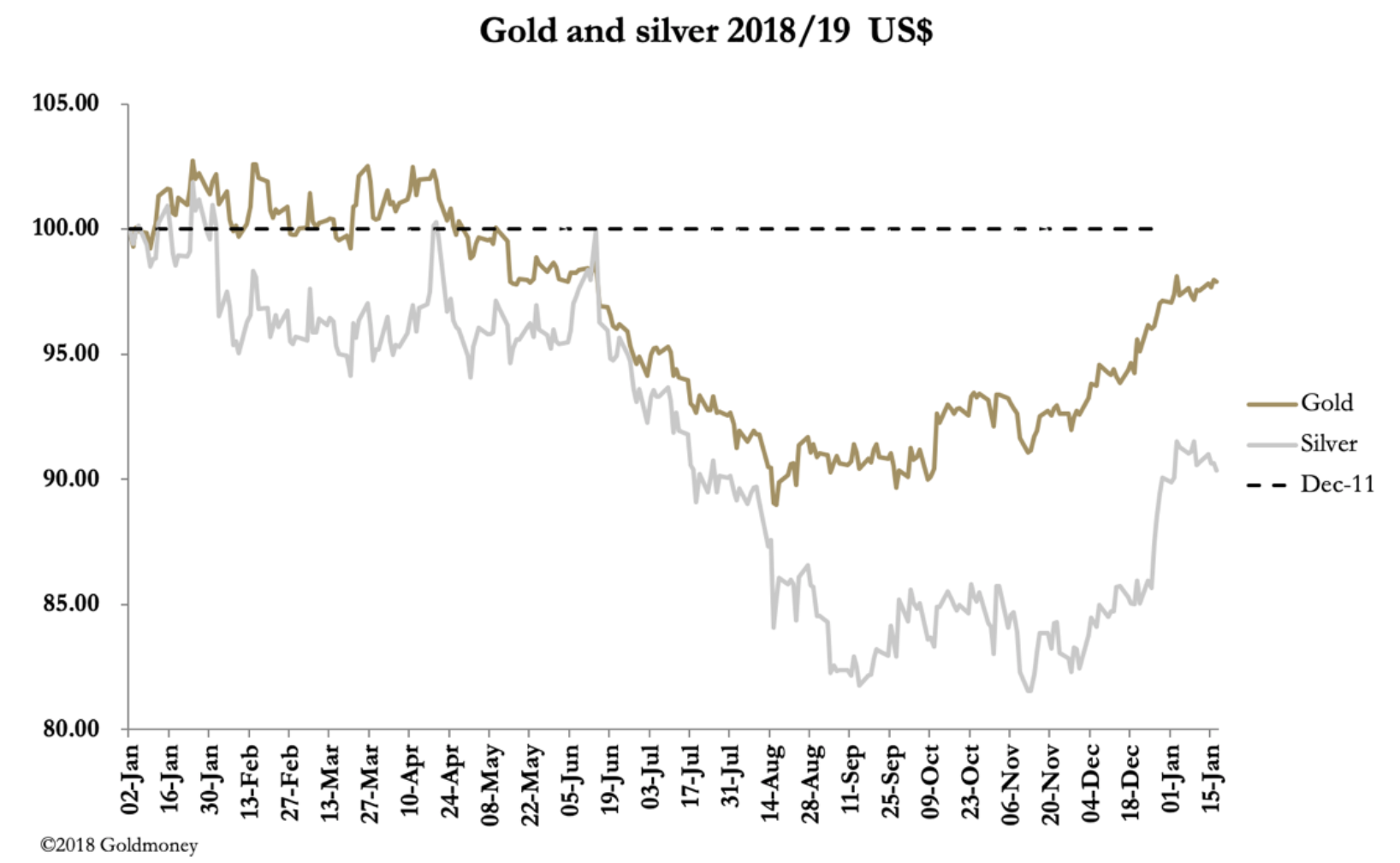 As can be seen in our headline chart, gold has been consolidating sideways while silver has drifted lower. Gold has been forming a near-perfect pennant formation, as illustrated in the more detailed screenshot below. 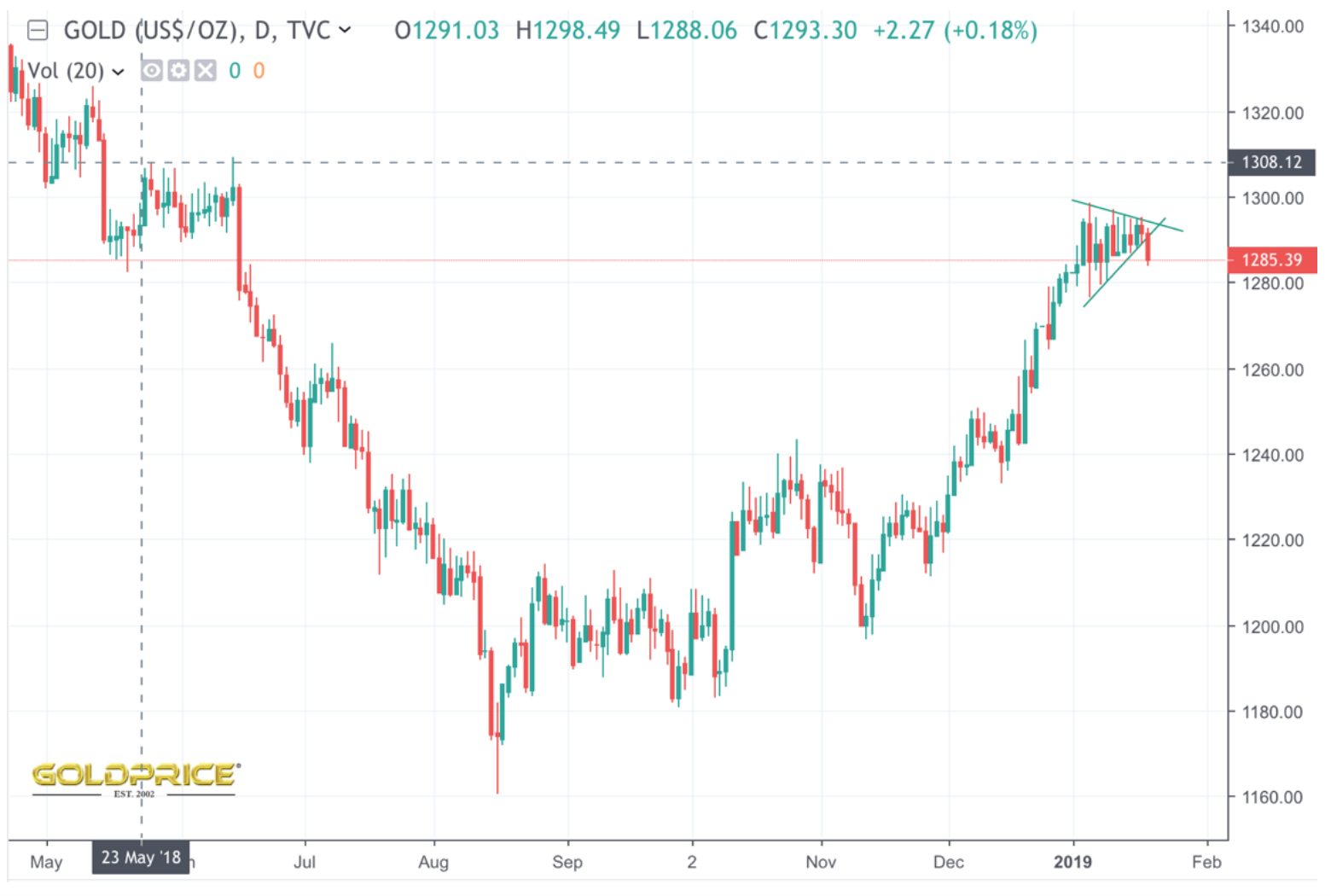 The initial move out of the pennant in a contra-direction often happens before the underlying trend resumes. The pattern will only be confirmed once the price moves convincingly above the upper line at $1295 at the time of writing, which will give a strong bullish signal to traders.

That is the positive news. However, there is a negative to be resolved. The active Comex February contract is rolling off the board, and the bulls must roll into April or later on a net basis for this supply to be absorbed. As of last night’s (Wednesday) preliminary Comex figures there were 235,183 February contracts outstanding, which is a high number for the next ten trading days.

Therefore, we can expect the bullion banks to use every opportunity to shake the bulls out of their positions. The dollar has assisted them this week by rallying from a short-term oversold position, with its trade-weighted index rising 0.5% on the week. This is our next chart. 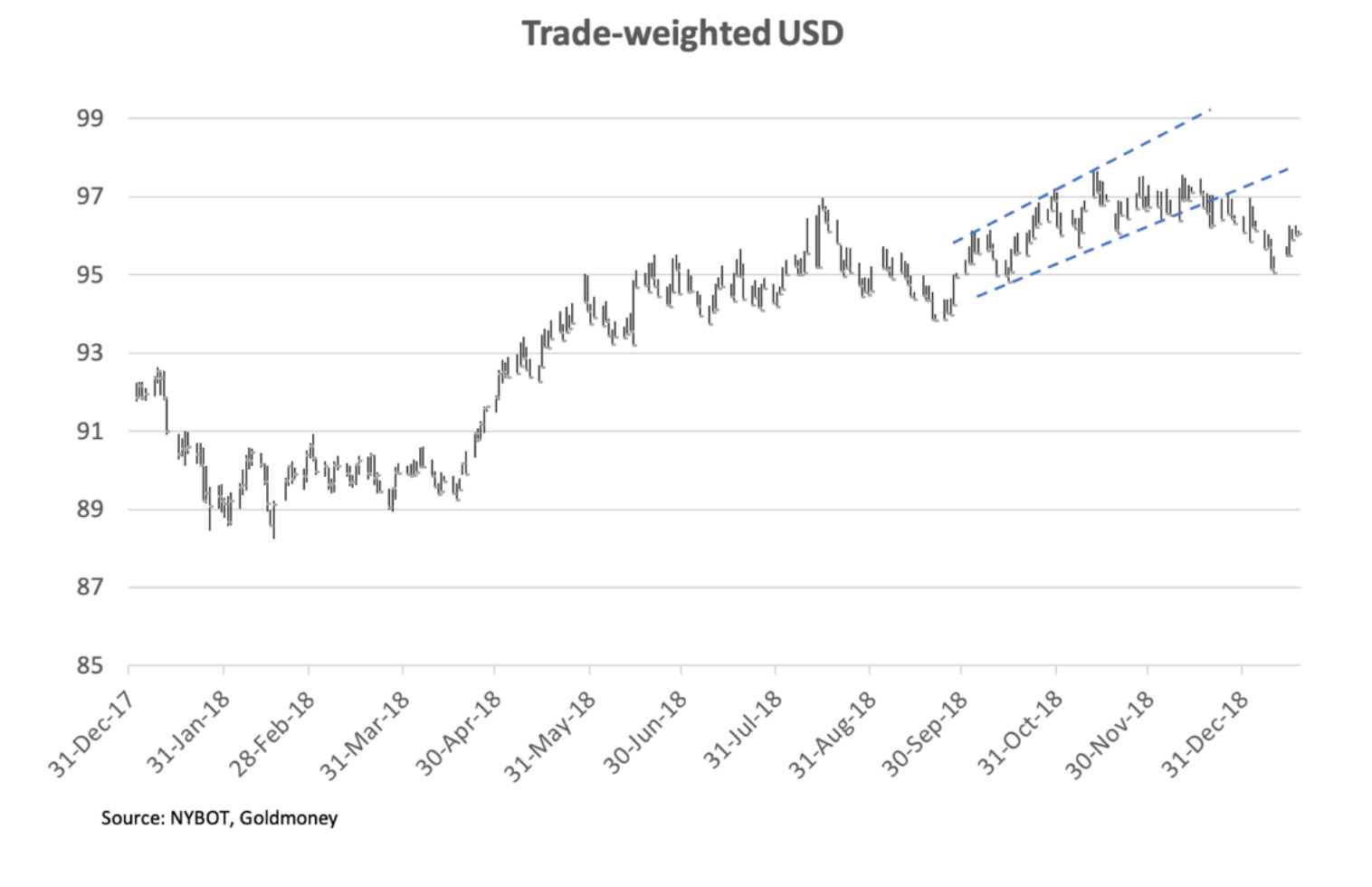 The TWI has tested formally strong support down to 95, established between June and August last year. However, the top formation, bounded by the pecked lines, remains a bearish indicator suggesting it is a matter of time before that support level gives way.

In other developments, the Fed continues to moderate interest rate policy, and China’s Peoples Bank has dramatically eased conditions with record levels of reverse repos, which inject short-term money into the system. Much of this is due to seasonal factors ahead of China’s New Year, when large tax payments are made. Despite these mitigating factors it is clear that China is slowing down, indicating global demand for manufactured goods is as well.

The necessity to keep financial asset bubbles inflated looks like driving the world towards a new era of monetary expansion on a one to two-year view. Price inflation, which is artificially suppressed by government calculation methodology, looks set to reflect a general loss of purchasing power for currencies generally, which should support the gold price.

The effect on the dollar can be expected to be negative overall. With Asian nations increasingly turning away from the dollar, funding America’s budget deficit is going to be increasingly difficult. In a recession, it will rise significantly, at a time when the US Government has relied on Asian buyers of US Treasuries to balance its books.

The situation in the Eurozone is worse still, the ECB having withdrawn from its asset purchase programme. When markets get a better grip on these issues, investors are likely to view gold and silver as under-priced in the context of these developments.