Gold and silver rallied in a quiet week which straddled the year-end. Gold rose $11 by morning trade in Europe from last Friday’s close to $1292, and silver by 30 cents to $15.70 over the same time frame. 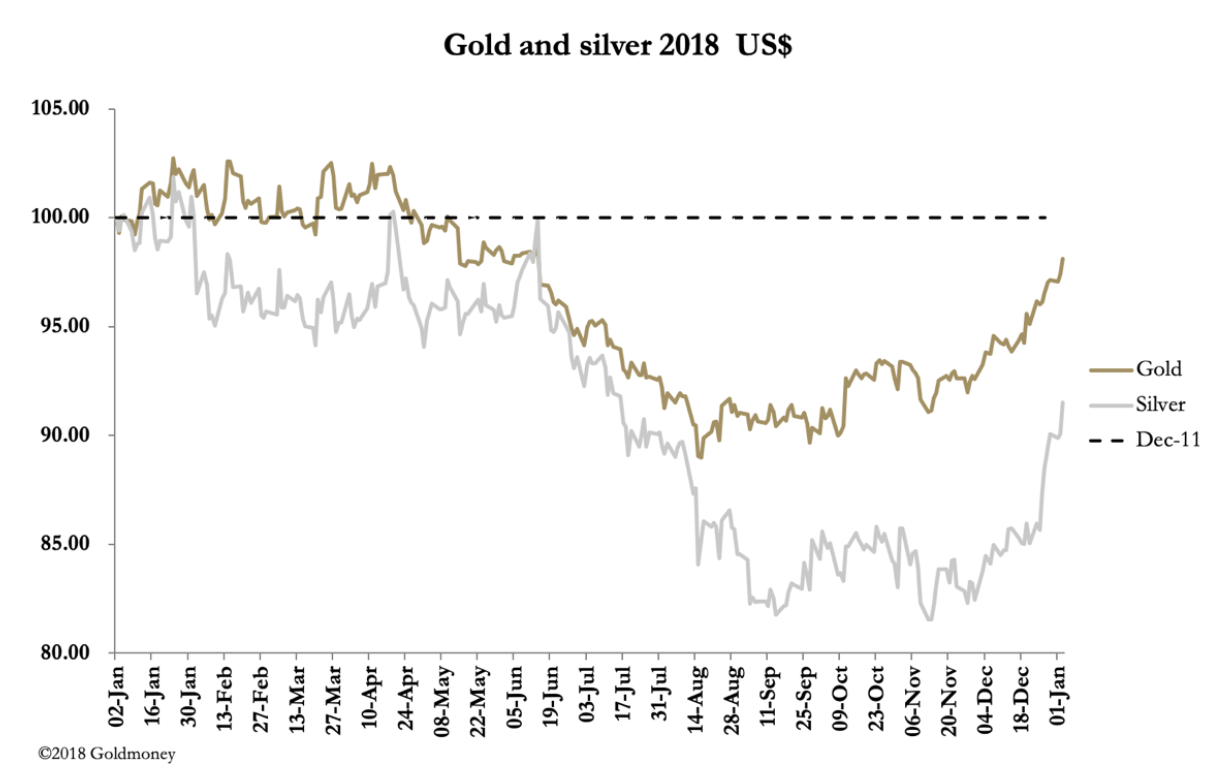 This week’s move continues a powerful rally, partly driven by bears closing short positions in a squeeze from mid-November onwards. Silver, which underperformed gold in 2018, has rallied even more strongly in percentage terms, up 12.2% since its mid-November low, while gold is up 7.7%. With a gold/silver ratio of 82.9 compared with 76.9 at this time last year, silver still has ground to make up.

In the absence of Commitment of Traders Reports (they are suspended due to the US Government shutdown) it is hard to judge whether precious metals are still oversold, However, other indicators, such as open interest on Comex, suggest we are back to neutral.

The next chart is of gold and its open interest. 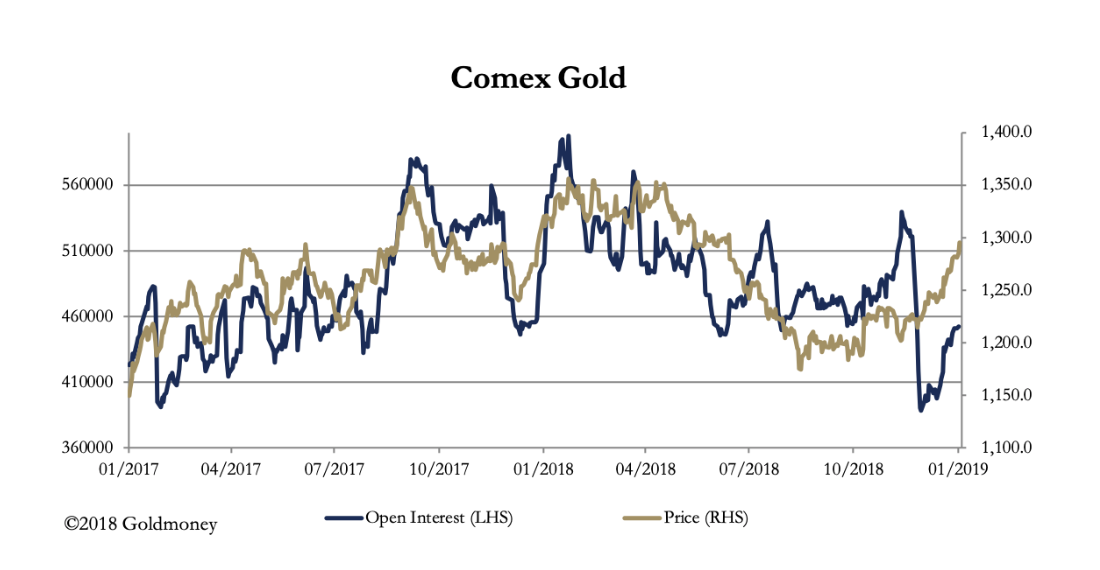 Open interest has been recovering rapidly towards neutral territory, which tells us that not only have bears been closing (leading to a contraction of open interest) but new longs have been opened at a faster pace. This suggests there are some short-term profits to be taken, and it is confirmed as likely by our next chart, which shows that in June last year there was failed support (now supply) in the $1290-1305 level, between the pecked lines. 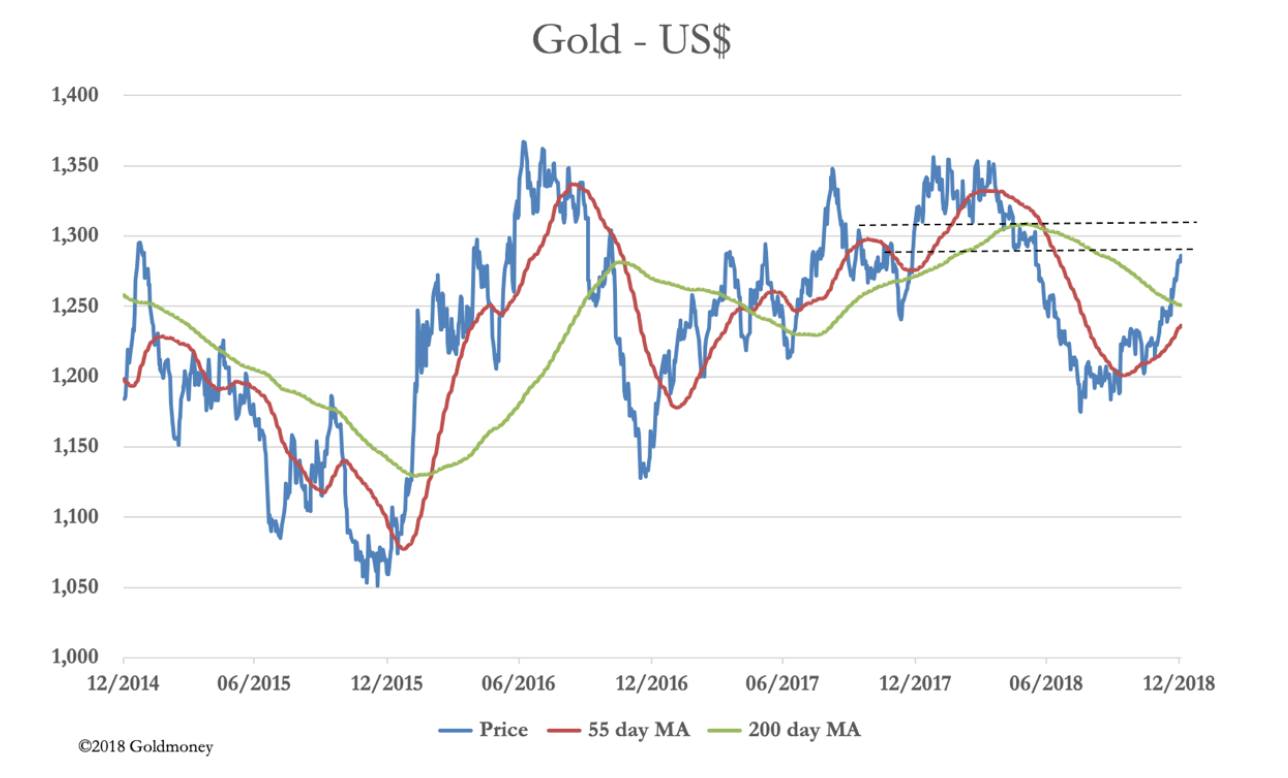 In normal charting terms, this overhead supply would be seen as a significant hurdle. But bear in mind we are talking of futures, and none of the trading contracts that existed seven months ago exist today. It would be a mistake to believe the current level for gold is an important supply level. The same can be said of the round $1300 number.

More importantly, the two moving averages are moving towards a golden cross, which will be seen by technicians as a bullish development. Putting these considerations to one side, a pause for breath, particularly if it leads to a minor decline in open interest, would be bullish, lending support for the next challenge, an assault on the $1360 level.

The more positive tone for precious metals has led to comments about their safe-haven status. When the amateur crowd starts talking in this tone, it is indicative of frothiness, so from that point of view the market is becoming emotional rather than rational. 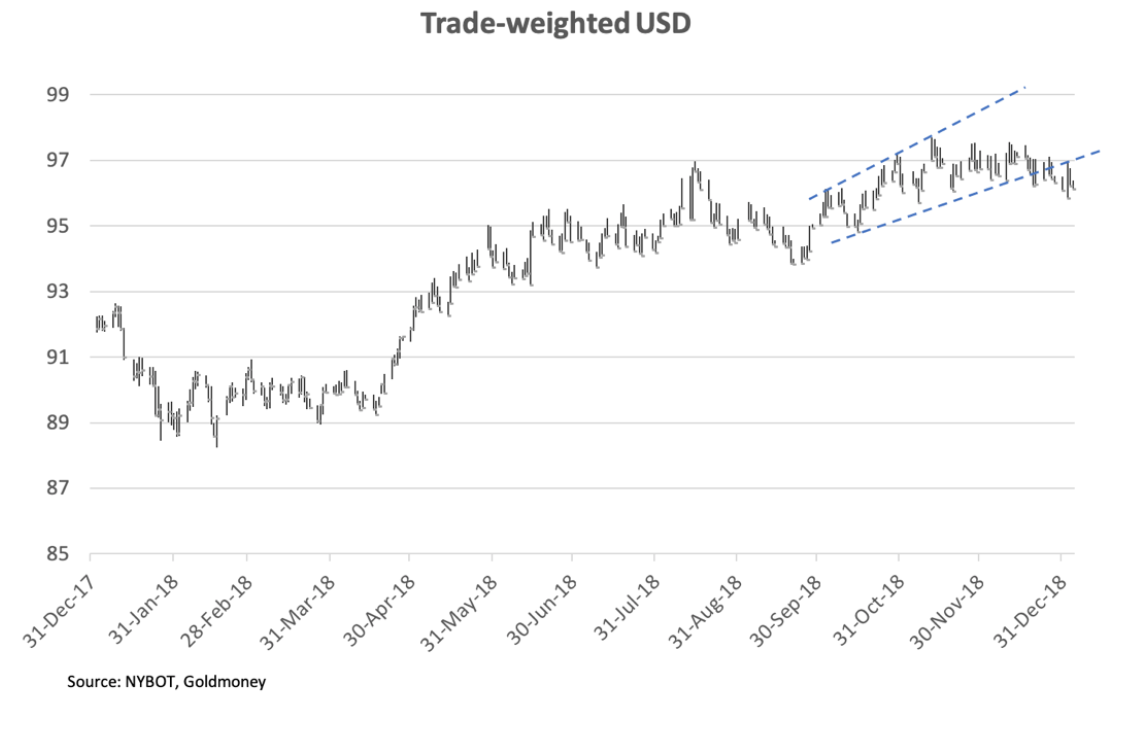 Clearly, the dollar’s TWI is breaking down out of a broadening top formation, which is bearish. It should be noted that most of the TWI reflects the euro, which is hardly a virtuous currency. But even with that note of caution, the dollar’s TWI chart looks bullish for gold.