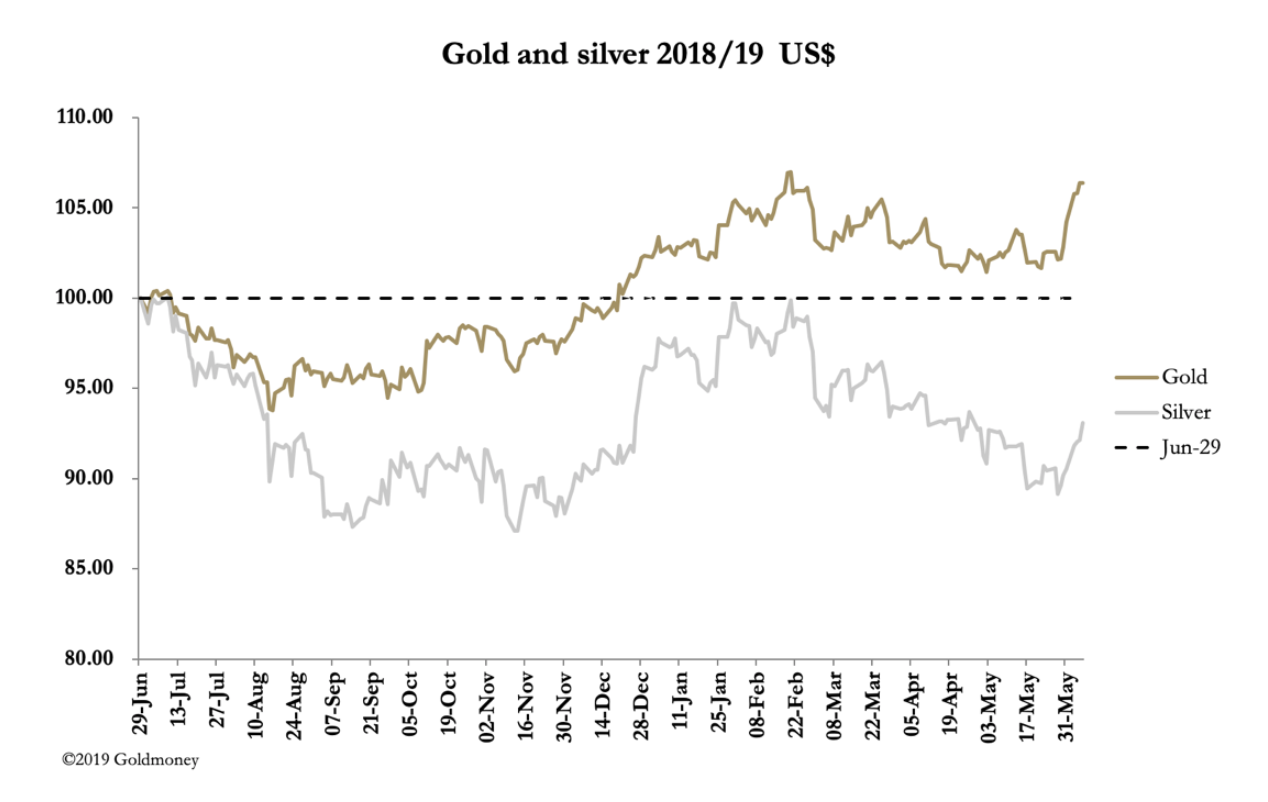 This week has seen a dramatic extension of a rally in gold which started in earnest on 30 May. In the seven trading sessions since the 29 May, the gold price has risen over $50 to trade at $1333 in European trade today (Friday). Silver has lagged gold, rising 45 cents over the same time-scale to $14.87.

Behind the move is an official acceptance that the American and European economies are stalling, and that central banks stand ready to ease monetary policy. I have been warning that a combination of Trump’s trade tariffs and the end of the credit cycle is potentially the most serious economic crisis since the 1929-1932 Wall Street Crash. That possibility is revealing itself.

The next chart, of the US 10-year Treasury bond yield sums up the deflationary forces. 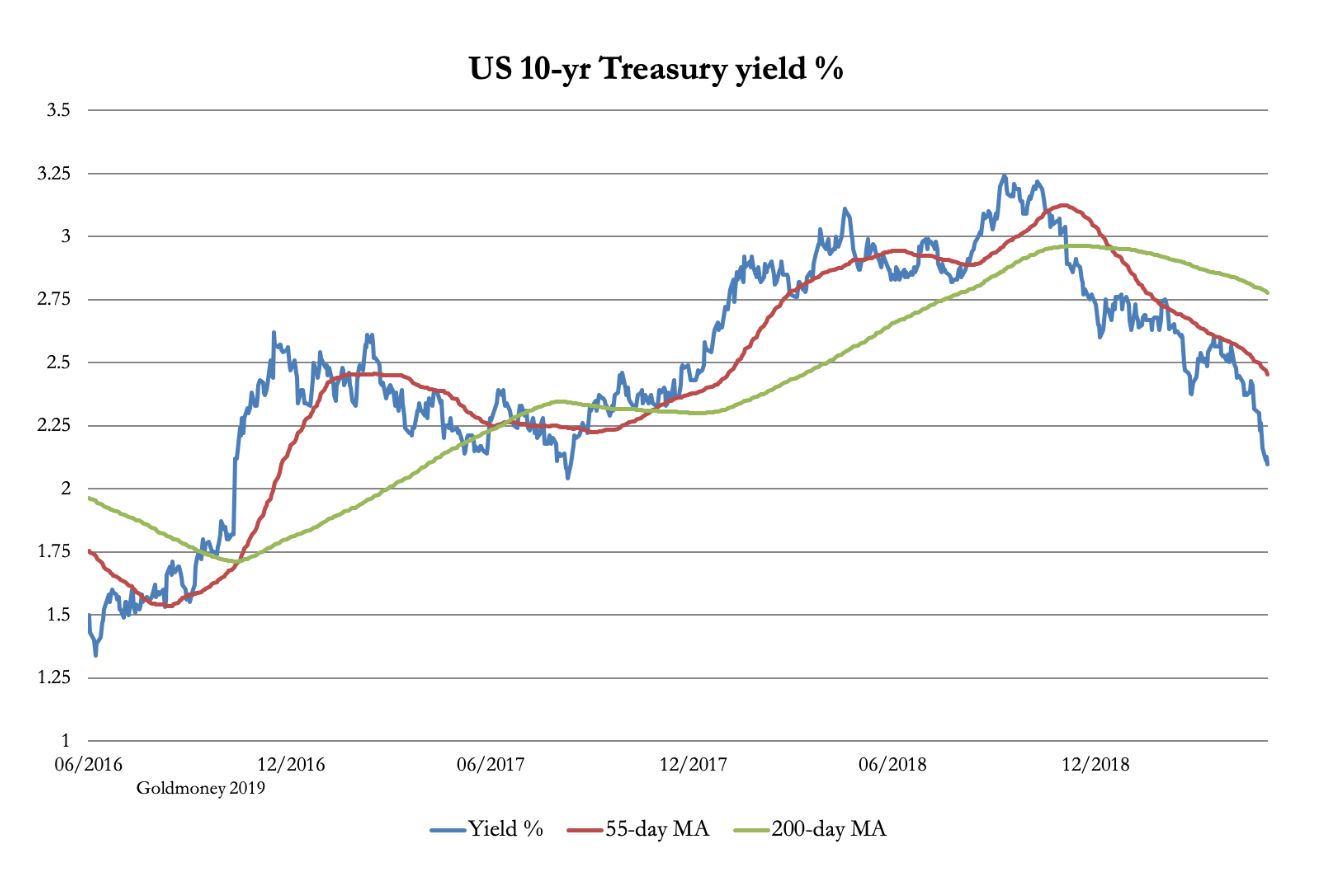 UST-bond yields have collapsed. There is little doubt this chart is immensely bearish, telling us the big money is flying into the safety of the safest fiat paper. Clearly, the rise in the gold price is based on similar considerations, and this is reflected in our third chart, below. 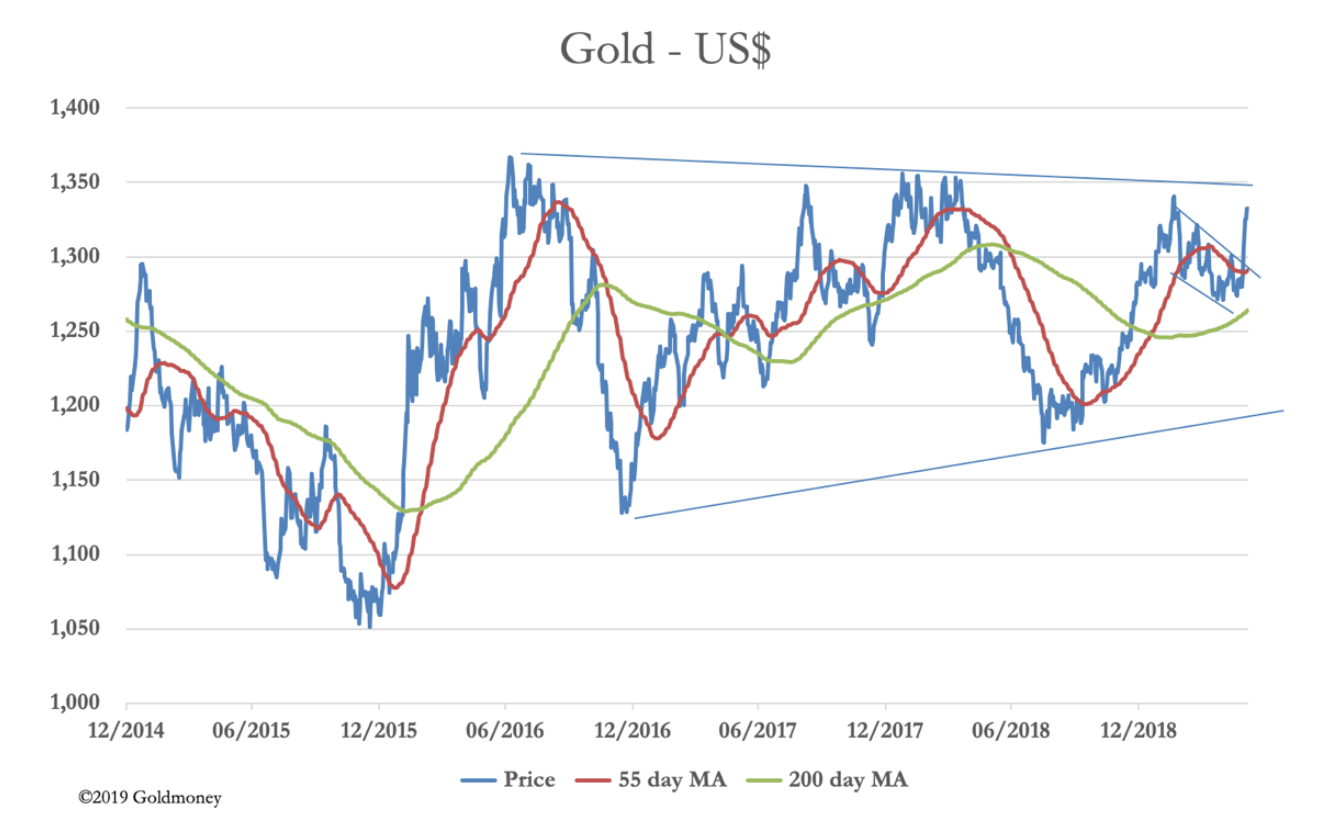 Gold broke out on the upside from a flag consolidation (between the two feint lines) in dramatic fashion, hitting $1344 intraday on Wednesday. This being the upper level of the consolidation pattern over two years old, one would expect the price to do some more work at this level before mounting a successful challenge to $1350 and beyond.

At the last date of record (Commitment of Traders 28th May) gold was still dramatically oversold, which tells us the speculators have been caught short. This is our next chart. 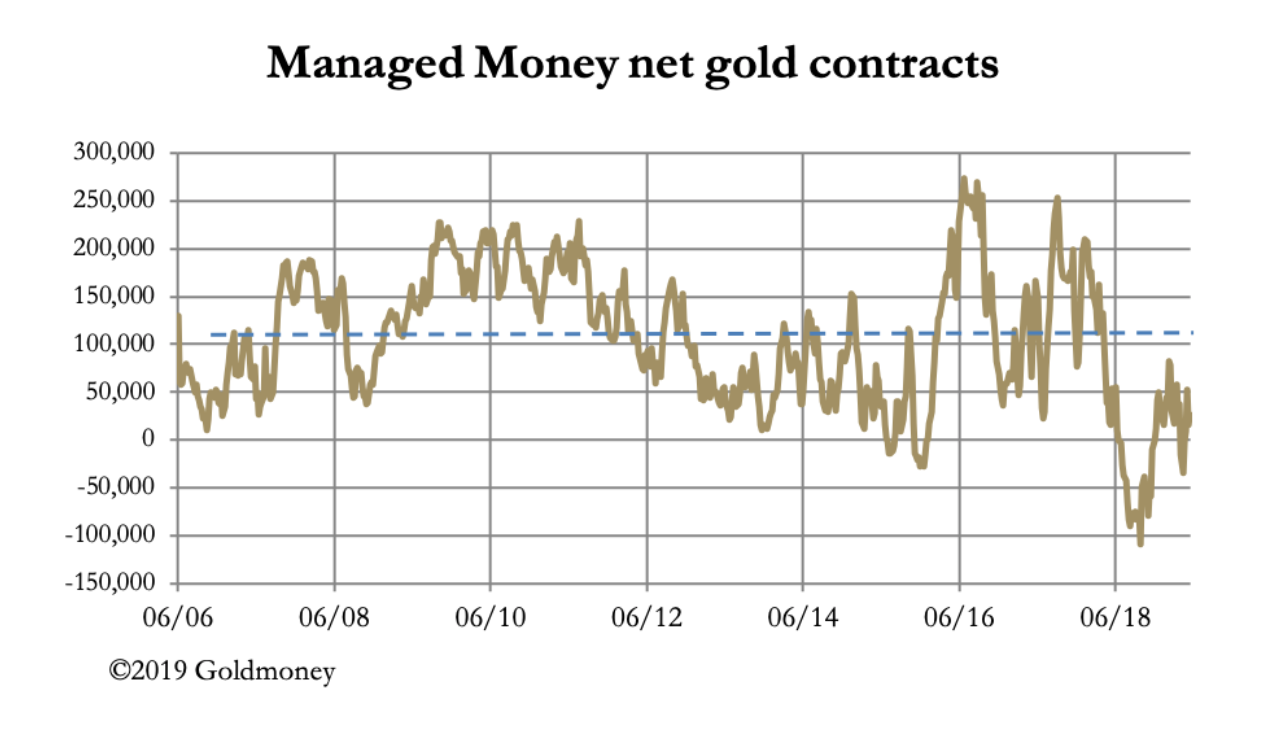 The pecked line is the neutral point, and last reported net longs were only 26,274 contracts. Since then there has been a mixture of short-covering and repositioning, which could have erased the oversold position. As well as the importance of the $1340-50 level referred to above, this indicates some potential for short-term profit-taking.

There is another important development in the offing, shown in our next chart, of the EUR/USD exchange rate. 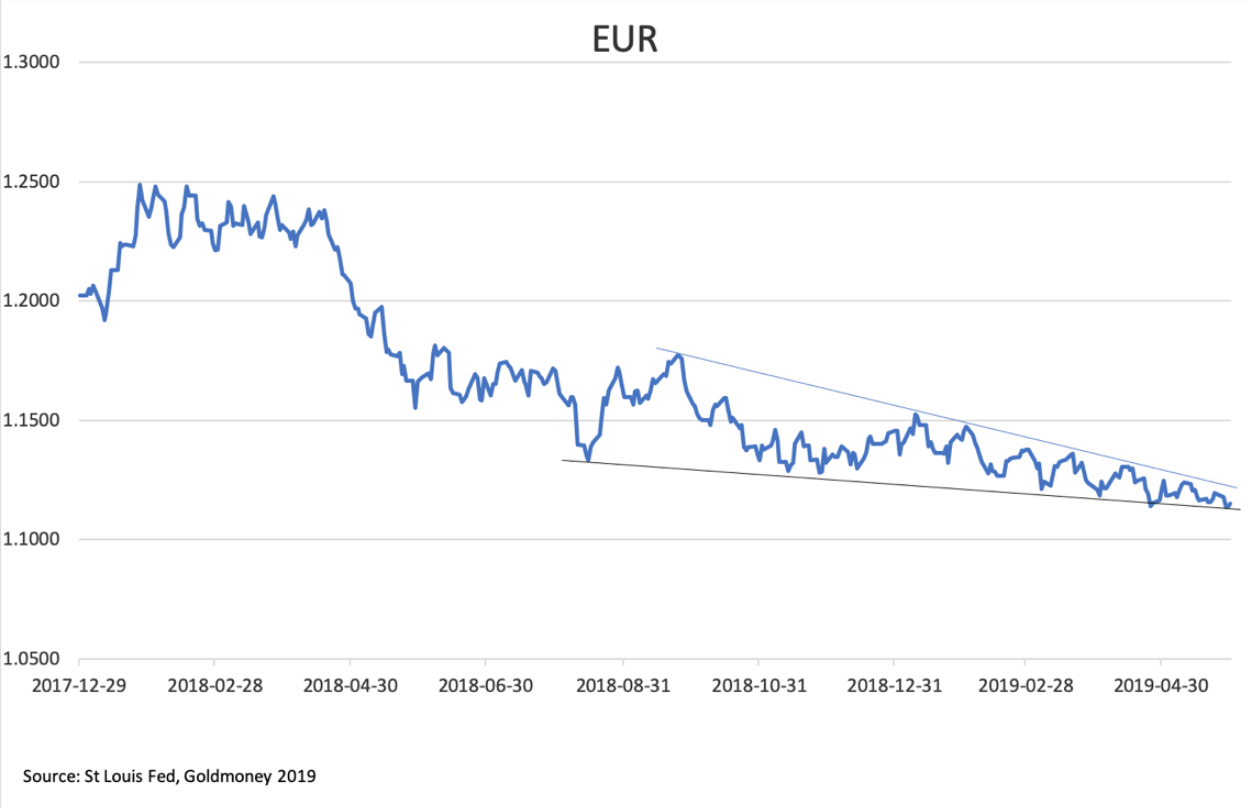 It is clear that this descending triangle does not portend well for the euro. If it breaks the lower trendline, which the pattern strongly suggests, we can pencil in a target of parity to the dollar. Clearly, not all is well with Euroland, and there is the additional problem of Brexit as well.

This chart pattern is replicated in the dollar’s trade-weighted index, as one would expect, and is our next chart. 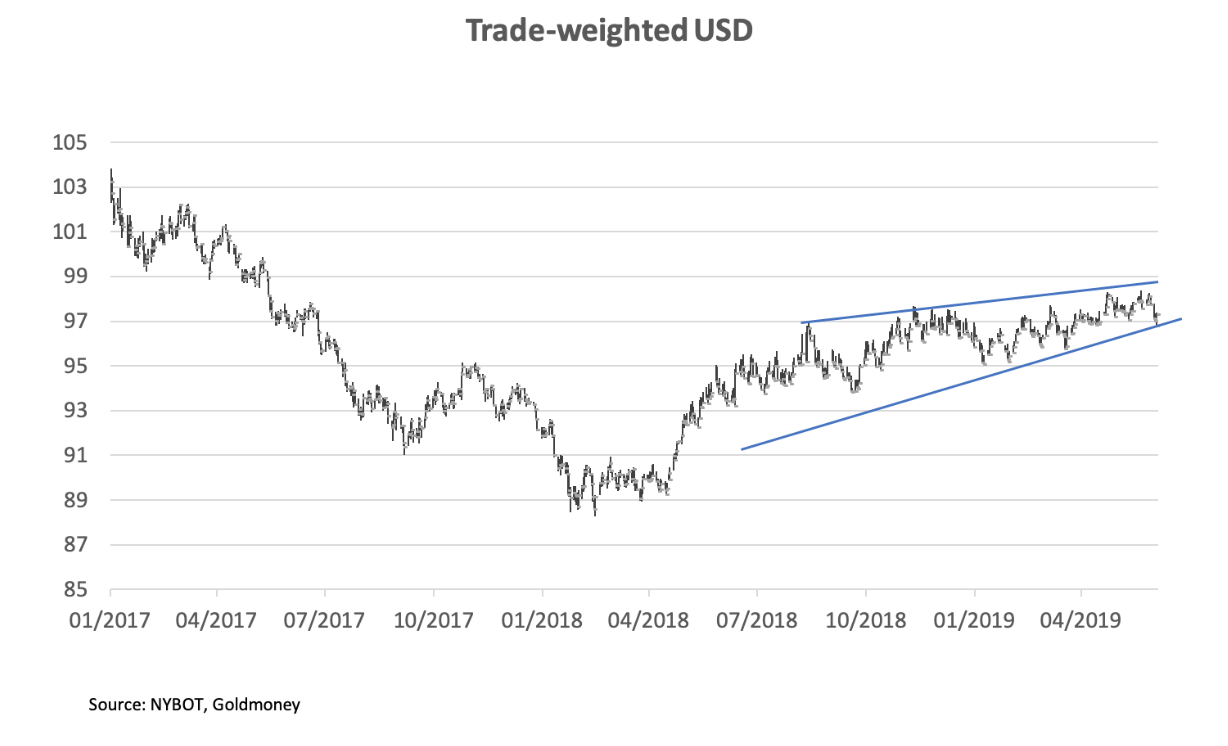 With a bearish euro (and presumably sterling) the dollar’s TWI is set to break out of its ascending triangle, with a target of 106. However, the effect on the gold price will depend on the US economy holding up well in the face of collapsing global trade.

That is what Trump’s economic plan adds up to: the world goes to hell while America sails safely on. Despite this wishful thinking, America is bound into global economic and systemic risks, as the chart of the UST 10-year yield shows.

Finally, a chart of the gold price in the four major currencies on the same timescale as our headline chart. 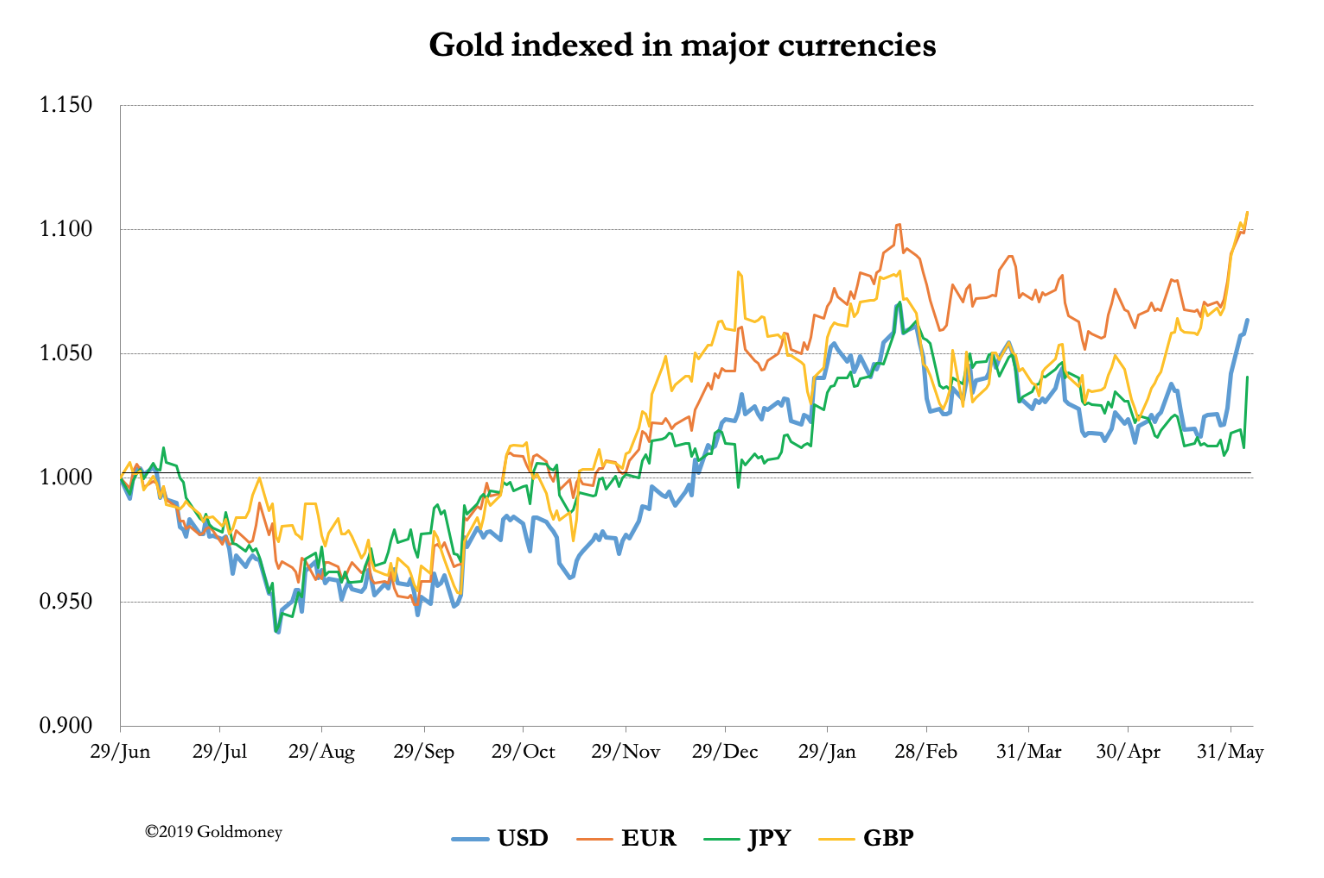 While in dollars gold is up 5.8%, in euros and sterling it is up 10.7%. The European mess suggests that in these currencies the gold price has much further to rise, even if it consolidates somewhat in dollars.