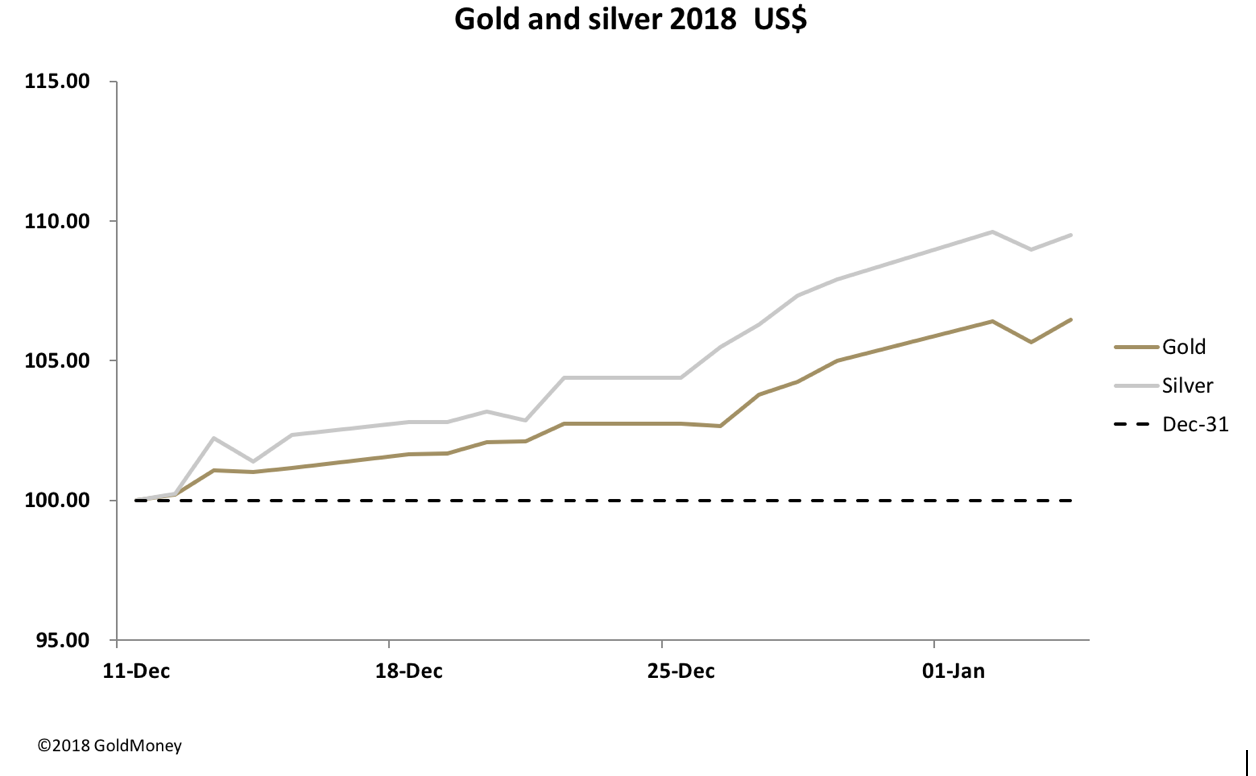 Our headline chart has been rebased to the December low to capture these figures. It is the third year in succession that gold has had a torrid fourth quarter, bottoming at the same time as the Fed has raised the Fed funds rate. This action always centres on futures trading, particularly Comex. The reason futures exist is to allow markets to even out price swings, by giving speculators a mechanism to take price risk away from producers. Instead, Comex has become the arena for exaggerating price swings, as the last three year-ends attest.

The reason for mentioning this is to point out that much of the rise in precious metal prices is due to the price suppression that commenced in September. The year-end had much to do with it, so in that sense the extraordinary performance of the last four weeks is price normalisation. However, gold’s performance differed from silver’s, in one key respect, and that’s the change in open interest on Comex.

Gold’s OI fell to a low of 446,618 contracts on 12 December, before bouncing strongly in light to moderate trade to stand at a preliminary 545,091 yesterday. This sudden 100,000 increase is reflected in our second chart. 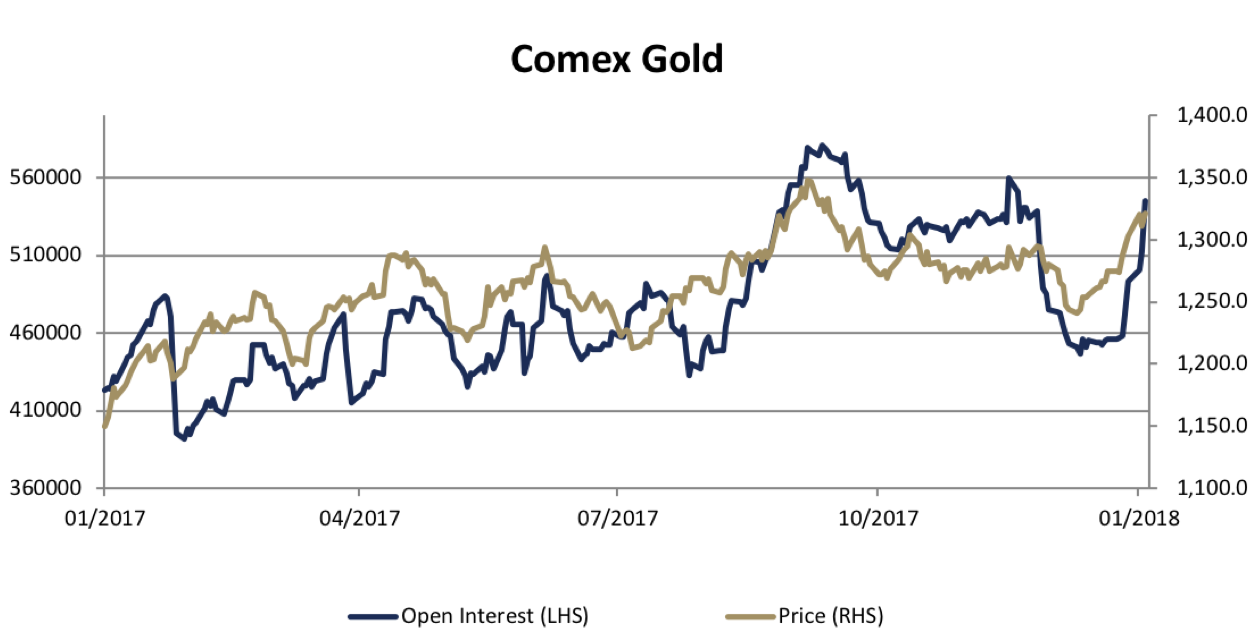 Silver’s performance has been bizarre, with OI actually falling as the price rose. This is our third chart.

In the last month of last year, as the price of silver gained by over 9%, OI fell by 10,000 contracts, signalling that silver was undergoing a vicious bear squeeze. In other words, all gains are purely the result of speculators being badly wrong-footed.

Our last chart puts these moves in a technical perspective. 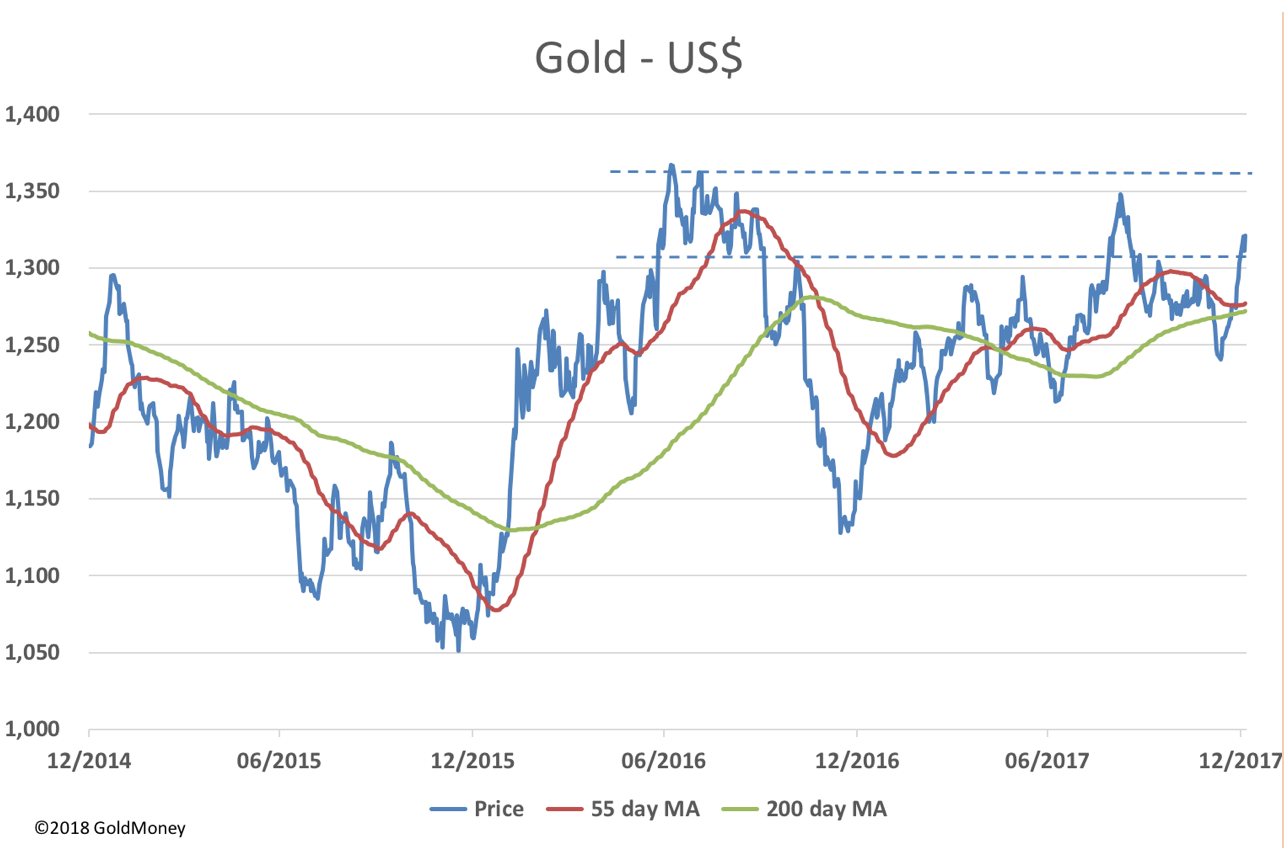 Gold has moved into an area of resistance marked by the highs of 2016 and last September’s peak, bounded approximately between $1310 and $1360 (the dotted lines). It may not need significant consolidation before breaking out to the upside, given the signal from the moving averages, which are now both turning upwards in bullish formation. If gold can clear those old highs, there appears to be little to stop it racing on towards $2000.

Momentum is certainly impressive. However, as always, how the price develops depends to a large extent on how the dollar performs, and that ended last year by losing nearly all its Q4 rally. 2018 is shaping up to be pivotal for the dollar, with China becoming more aggressive over the use of her own currency for trade settlement. It appears she will introduce a yuan denominated oil futures contract on the Shanghai Futures Exchange later this month, allowing oil suppliers to hedge their yuan exposure. This will allow them to take payment for oil in the Chinese currency. If so, it will be the beginning of the end for the petrodollar, which has been the fundamental plank behind the dollar’s global status. If the petrodollar is discarded for Asian trade, it will be a big blow for the dollar’s purchasing power.