Gold and silver’s sell-off stabilised this week after their recent unsuccessful challenge at overhead supply at $1350 and $16.20 respectively. The previous Friday gold lost $20 to $1293 and fell a further $12 at the worst yesterday (Thursday) before recovering this morning (European time) to be more or less unchanged on the week at $1294. Silver followed a similar pattern, ending up slightly down on the week at $15.13. 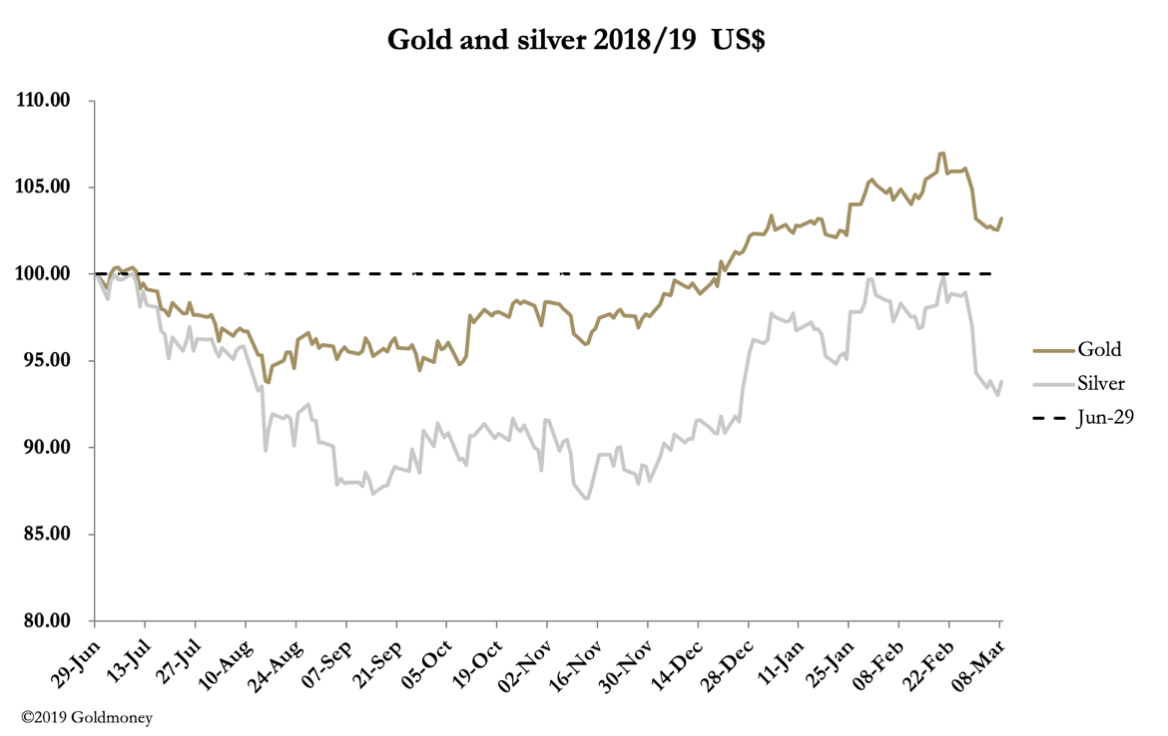 The last fortnight has seen a good shake-out of flaky bulls on Comex, and now that the April contract is beginning to run down, open interest has sold off by about 35,000 contracts. This is shown in our next chart.

For gold and open interest to move like this is to be expected in a bullish context, reflecting prices occasionally getting ahead of themselves and needing to correct before another advance. In a technical context, gold’s sell-off brings the price back to the 55-day moving average and the lower-end of old support. This is our third chart. 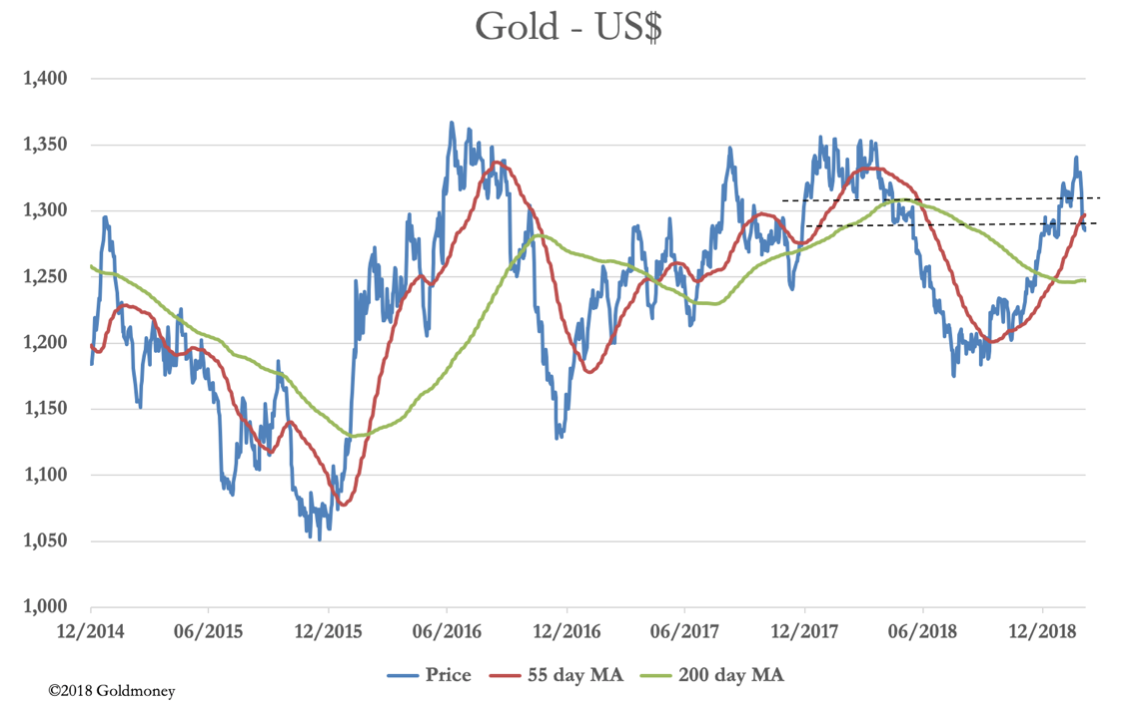 So far, so normal. And while we at Goldmoney know that gold is money, the reality is ordinary people and investors treat it as an investment or speculation. Consequently, higher prices in February encouraged profit-taking in physical ETFs. According to World Council figures, North American funds had outflows of 29 tonnes in February out of a worldwide ETF net outflow of 33 tonnes. Furthermore, private individuals, notably in the UK and Europe, have heaved a collective sigh of relief and used the recovery in prices to sell some of their longer-term gold exposure.

The rise in the gold price since September has been exaggerated priced in euros and sterling, as can be seen in the following chart. 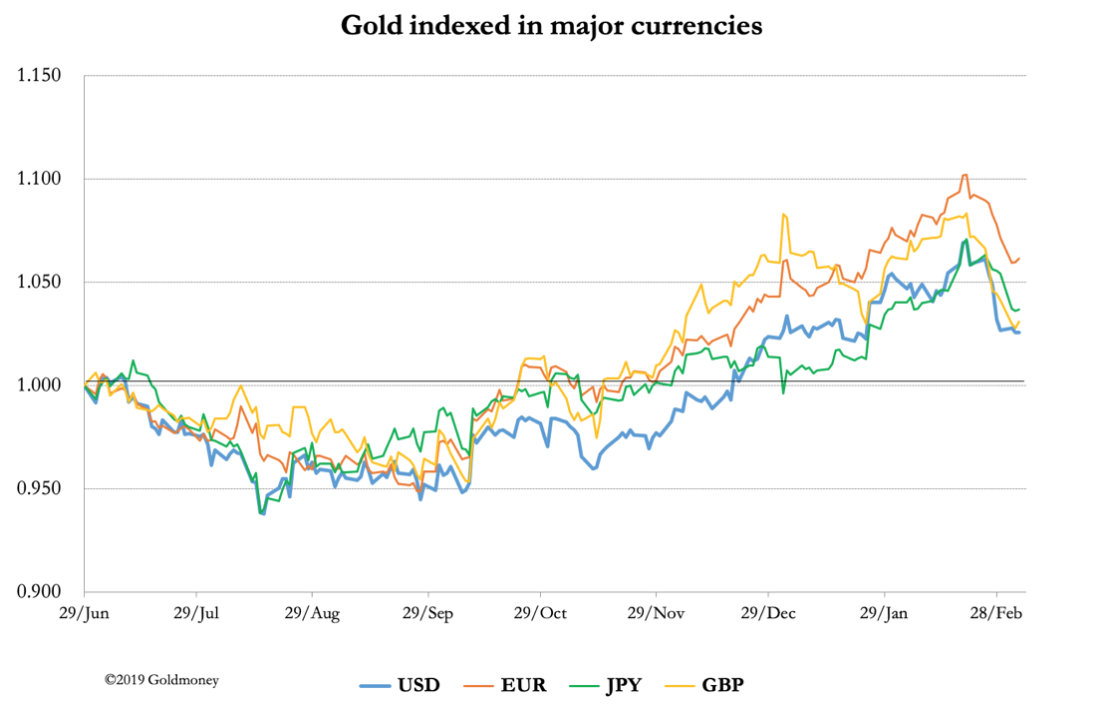 However, we appear to be entering a new currency regime against a background of a global economic slowdown replacing growth, which has been significant enough to make the ECB announce it will subsidise the banking system with a third round of “targeted longer-term refinancing operations” (TLTRO). Admittedly, TLTRO-III is due to be introduced next September, but in the event of a continued deterioration of the Eurozone’s economic outlook that can be brought forward.

The immediate consequence was a weakening euro. The euro’s abysmal performance has been the mainstay for the dollar’s trade-weighted index, which this week rose 1% to 97.45.

China announced yesterday its third increase in gold reserves, confirming a significant change in reserves policy. The size of these reserve additions is not the point, being only a small part of overall state holdings. It’s the message that China is now selling dollars arising from trade surpluses with the US for gold and is not automatically reinvesting them in US Treasuries that’s important.

Effectively, China is signalling to the US that so long as the US antagonises China over trade and technology, she will no longer act automatically recycle dollars. China’s addition to her gold reserves since November is only worth $1.25bn, about 5% of monthly exports to the US.

It is therefore a geopolitical signal that needs watching for further developments.