By Alasdair Macleod
Market Updates July 13, 2018
As our headline chart clearly shows, gold and silver have returned to test the level set at the major turning point of last December. Will they break down and resume a slide, or will they bounce higher? The longer they tarry, the more likely it is prices will sell off even more, at least that’s what the charts suggest. 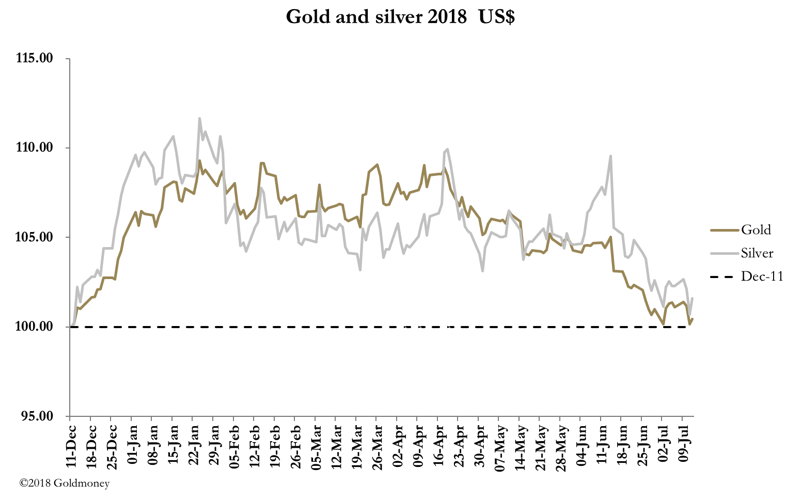 This week, gold and silver lost most of the rally from recent lows on Wednesday, undermined by dollar strength. Gold fell a net $14 from last Friday’s close to trade at $1241 in early European trade this morning (Friday) and silver lost 18 cents over the same time scale to $15.84

Perhaps precious metals appear directionless because the speculating hedge funds are balanced in their views. The next chart shows the net position of the managed money category on Comex, which is mostly hedge funds. 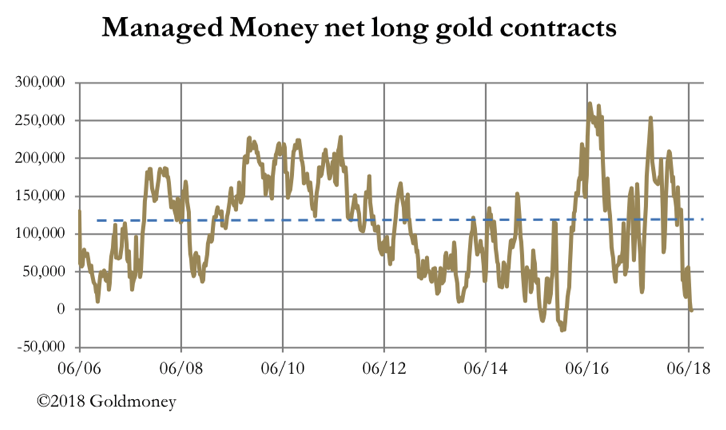 Unusually, the hedge funds were net short by 1254 contracts according to the last Commitment of Traders report, dated Tuesday 3rd July. There was little change in the price level for gold between then and last Tuesday, in a week when US traders had the 4th July holiday. Updated figures will be available later this evening.

The chartist view, expressed above, is about a growing possibility of a breakdown of an important support level, a situation normally applied to equity market analysis. Futures are different in that what matters more is the balance between speculators and the market-making banks. It is rather like a pendulum, whereby the market makers give the long speculators enough rope by themselves going short, and subsequently they mark prices down to retrieve their short positions. Then the cycle starts all over again.

The chart above shows we are at the bottom of this artificial cycle. However, the net short position is the balance of about 105,000 contracts either way. So, it is quite possible for the longs to be shaken out even more if the $1240 level for gold gives way, but the market-making banks then being comfortably long can be sure to want prices higher.

Therefore, a breakdown of $1240 support is likely to be followed by a gut-wrenching sell-off, followed by a rapid return to test supply at $1300. That is, if the sell-off happens but equally it may not.

Turning to fundamentals, equities on Wall Street appear to be on the way up once again. This is looking similar to the wobble in 1927, when the US economy was judged to be entering a minor recession, and the Fed eased monetary policy. Similarly, slowing money supply growth and a flattening yield curve is taken today to signal a stalling economy, and a likely deferral of further interest rate rises.

We all know what happened in the Roaring Twenties. Equities roared into all-time highs in 1929 followed by the Wall Street Crash. At that time, the dollar was backed by gold to the extent they could be submitted to the Fed in exchange. This time, there is no such backing, and the purchasing power of the fiat dollar is free to change.

Therefore, for the market-making bullion banks, the right thing to do is to load up on gold and silver contracts as much as possible. An engineered sharp sell-off for gold followed by a strong bounce looks increasingly likely.