This week has seen precious metals prices rise strongly, with the bears caught on the hop. The chart below shows gold which at the time of writing has been consolidating under overhead supply in the $1330-50 level. 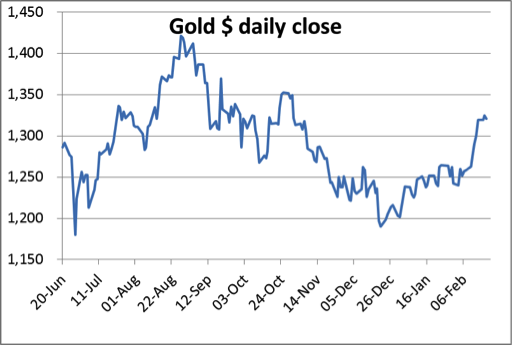 The squeeze in silver has been more dramatic, the price rising 15% this month so far. Again, there are signs of consolidation before silver goes on to challenge supply at the $22.4-23.0 range.

As I've stated before, the change in sentiment from the gloomy forecasts at the recent year-end is remarkable. More and more technical analysts are coming round to the likelihood that prices are bottoming out and gold may be establishing a new uptrend. This tends to feed into opinions expressed by investment strategists, who then come up with explanations as to why gold is going better in the context of broader markets and why it is likely to continue to do so. This is all part of the changing psychology behind markets.

Inevitably these strategists tend to pigeon-hole markets into annual categories. Thus, 2013 will become the year of redistribution between weak holders into stronger hands. It follows that if the current uptrend is maintained, 2014 will soon be described as the start of a new bull market, possibly multi-year, all weak holders having been taken out of the market.

This is important, because precious metals are seriously under-owned, the only bulls being die-hard fans of gold and sound money. This extreme will eventually be corrected as prices are driven upwards when investors buy into the new trend: it always is.

Chinese demand for gold continues apace, and final deliveries for January are 246 tonnes, the highest ever for any month. This is nearly double the rest of the world's monthly mine production, and is shown in the bar chart below: 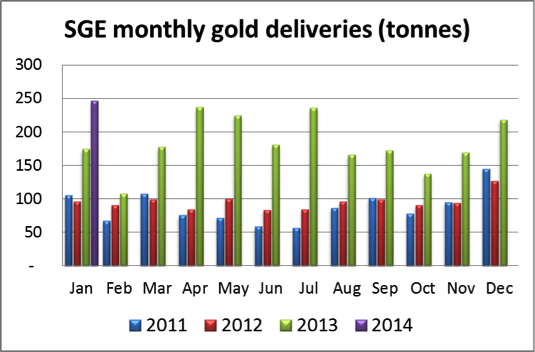 The point is Chinese demand is still accelerating, which tells us physical gold is too cheap. It seems amazing that this demand goes unrecognised. However, even the yearbooks issued by the Shanghai Gold Exchange clearly state DELIVERY IS DEMAND. Sorry about the capitals, but most analysts have missed the point, commonly stating that Chinese demand last year was only 1,100 tonnes, when SGE delivery alone was twice that. Furthermore, add in Hong Kong and we know from government statistics that total public demand in China, including 50 tonnes of coins, tops a massive 2,800 tonnes.

Why Western analysts persist in beliefs that demand in China was less than half this is their affair. Presumably this is the information that the bears have not bothered to verify, but at least GoldMoney customers are better informed.