Trading in precious metals was quiet until Wednesday morning, when prices began to soften. When the FOMC meeting released its policy statement at 2.00pm EST, gold and silver responded by falling heavily, with gold breaching the $1200 level yesterday (Thursday) and silver crashing through $17 to a low of $16.33.

This morning (Friday) gold and silver fell further in overnight ahead of the London opening, with gold trading down to $1173 and silver at $16.00. It is clear that the bears, including the bullion banks with short books, mounted an attack on the $1180 level, where there were stops to take out.

So a major test is taking place and the bears are winning. Behind these moves is a strong US dollar, weakening commodities generally, and a collapsing yen. The dollar is responding to the absence of further quantitative easing, traders seemingly surprised that the Fed is ignoring signs of economic weakness. To the contrary, the Fed's FOMC statement pointed out that unemployment continues to fall. Furthermore, there is little doubt the Fed is mindful of the lower budget deficit and the lack of liquidity in bond markets, the consequence of the Fed being the dominant buyer of Treasuries.

While currency markets interpreted the FOMC minutes as hawkish, this is an overstatement. After all, the Fed had clearly stated that QE would end this month, and unless there is some sort of crisis to back-track on, renewed QE would have only undermined the Fed's credibility. The truth has probably more to do with extremes of bullishness fuelling equities, with broker loans soaring to new heights and sovereign bonds ignoring any future upturn in interest rates. Fund managers committed to a perpetual state of market elevation are not about to spoil the atmosphere with thoughts it might just be a bubble.

Along with all the positive sentiment in equities and bonds goes negative sentiment in precious metals. In both gold and silver it appears that new bear positions have been opened, making both metals heavily oversold. First let us look at gold. 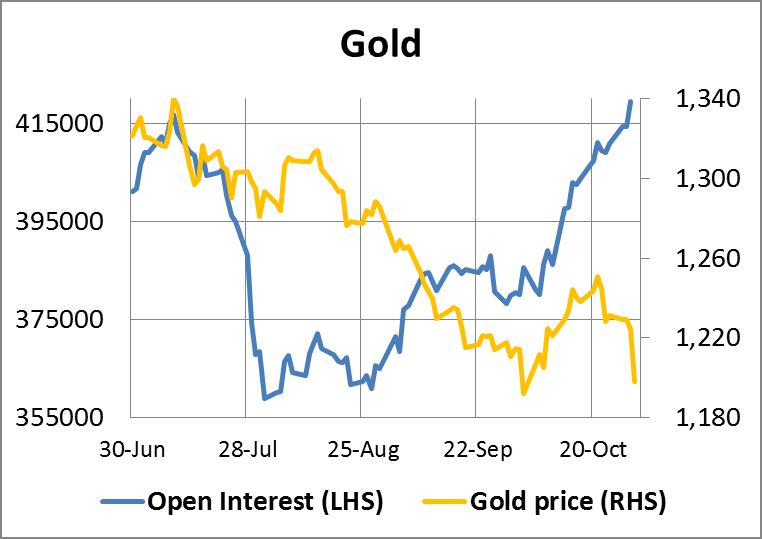 The chart tells a simple story. Since end-August Comex Open Interest has risen sharply as the gold price fell, indicating it has become increasingly oversold. Since 21st October, OI has risen strongly while the price has collapsed. We can be sure that this market is easily in record oversold territory, which should be confirmed by Managed Money shorts in the Commitment of Traders Report out tonight.

Silver, which has been falling sharply, tells a similar story. 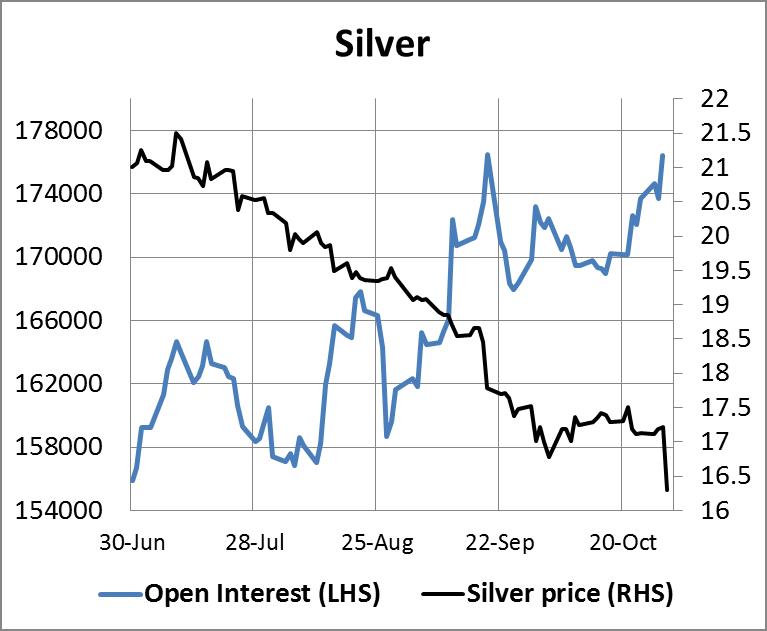 The price trend has been unremittingly downwards, while Open Interest is close to the highest level of the last two years. The gold/silver ratio is now at 73, testament to silver's poor relative performance.

In other news, Russia's central bank announced it bought a further 37.2 tonnes of gold in September taking its reserves to just under 1,150 tonnes. This is its largest purchase since November 1998, indicating today's low prices are taken to be an opportunity by Russia to add to her reserves. And last week Shanghai deliveries remained high at 59.68 tonnes, no doubt responding to low prices.