This week started with a severe markdown in gold and silver prices when markets opened in the Far East on Monday morning, taking gold down $12 to $1278 and silver only 12 cents to $19.03. The clue in this was the resilience of silver, which hardly moved: it was an attack on the gold price presumably designed to take out stop-losses.

From there precious metals never looked back. Interestingly, for the first time in a long time, prices advanced in London dealings, indicating they were being driven more by physical demand than trading in US futures. This is hardly a surprise given that GOFO is still negative for up to three months forward and has been in backwardation every day since 3rd April.

The sharpness of the bounce in the gold price is shown in the chart below of gold and silver prices for the year so far. Given the short-term bearishness of some of the major banks one can only conclude that there is an underlying firmness in these markets. 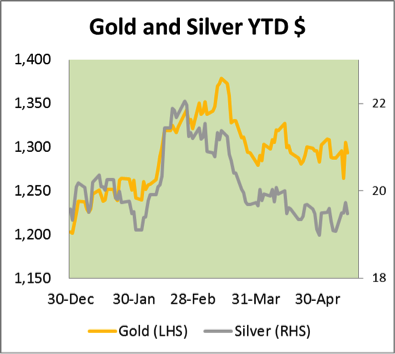 Yesterday's US Initial Claims numbers came in lower than expected, triggering algorithmic traders to sell gold which fell $10 in minutes. The test will come from London later this morning: will physical buyers keep the market bid, or will there be some profit-taking ahead of the weekend?

Computer-driven traders are not getting it all their way. US bond yields have fallen dramatically, which is wholly inconsistent with a recovering economy as Initial Claims would suggest. 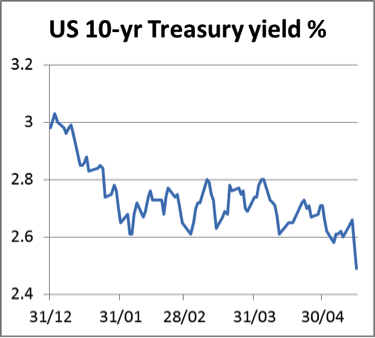 It is clear that very little of the money printed through QE is getting into the economy, other than by government spending, and instead is still confined to financial markets.

The most important news regarding precious metals markets was the announcement of the end of the silver fix from this August. The background to this move is Deutsche Bank's withdrawal from the gold and silver fix, which in silver's case left only HSBC and Bank of Nova Scotia agreeing the daily fix. Given increasing regulatory interest in the fixing processes for both precious metals, coupled with potential litigation for the banks involved, it is clear that for only two banks to continue fixing silver is untenable.

The broader question of the future of the gold fix is more important. It appears that no bank is willing to take over Deutsche Bank's seat, raising the question why. It is likely that compliance officers at the major banks have all reached the same conclusion: that the gold fix may be difficult to defend from allegations of market-rigging, and it would be wise to turn down the opportunity. If nothing else, in my opinion, it looks like there is a growing possibility the daily gold fix will end as well.