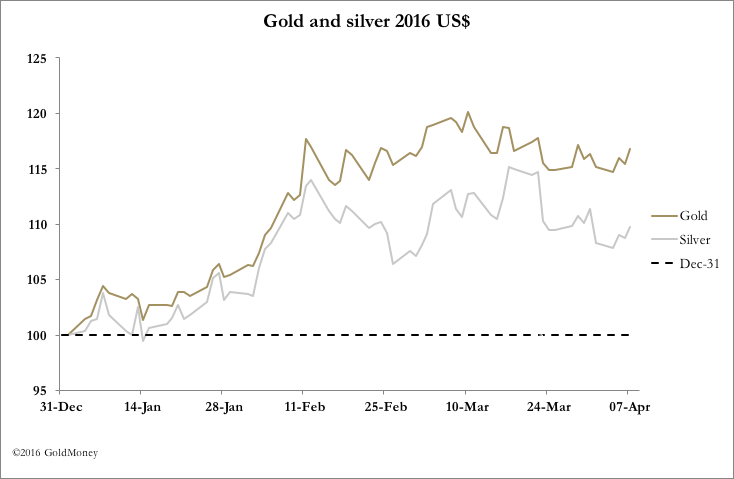 Silver's performance compared with gold reflects lower than normal silver volatility, a trend that has featured from the start of this year, which can be discerned in the underperformance shown in the headline chart above.

There is much happening on the subject of money, and to an extent, even gold is a bystander in a developing monetary train wreck. In recent weeks we have seen sterling come under pressure on fears of Brexit, plus some appalling trade figures. If Brexit happens, it will be the end of the grand European project, and the euro could disintegrate, but markets are not yet reflecting this possibility.

The dollar has been losing ground against both the euro and the yen. In the last eight trading sessions, the yen has gained 5% against the dollar, breaking the important 110-yen level (a strong yen means a falling JPY rate). Both the yen and the euro feature negative interest rates, so these moves are counter-intuitive. Could it be that negative interest rates are leading to a contraction of bank credit, forcing currency shortages on the markets for these two currencies?

The bank credit numbers will be reported in due course, but even then they will not tell the whole story. Demand for currencies with negative interest rates is certain to emanate from the shadow banking system, due to the lack of available collateral. With the BoJ and the ECB buying everything in sight, it is the shadow banks that are being squeezed.

The simplest way to understand this arcane subject is as follows. The principal function of shadow banking is to finance the deferral of settlement on a full range of financial instruments and securities. If you remove the means to do this by contracting the quantity of collateral available, then you are going to force earlier settlements of financed positions than would otherwise occur. This means that liquidation cash is demanded by the shadow banks and their customers to replace the credit which is no longer available. And cash, where the credit has been very cheap to the point where it even pays you to borrow, is demanded in the currencies with the lowest interest rates, because that is where the collateral is being drained from the system.

Both the BoJ and the ECB are hoovering up nearly all available collateral. The suggestion that gold is side-lined while this bizarre situation unfolds is apt. We are in uncharted territory, and few people understand the potential consequences, so how can you evaluate the purchase of anything?

Back to common sense. The price of gold has risen less in yen and euros than in dollars or sterling. Once the shadow banks have found a new balance by contracting their credit sufficiently, doubtless the euro and the yen will begin to reflect some fundamentals. And gold is cheap in these currencies, as demonstrated in the next chart. 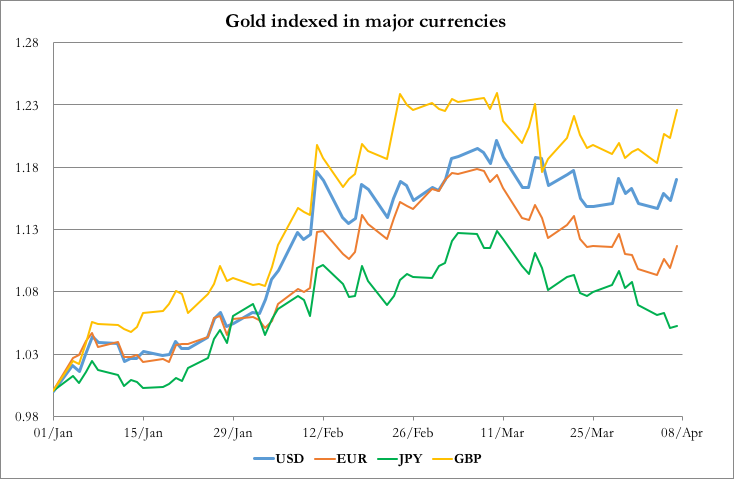 So far, from the beginning of this year gold in dollars is up 17% and in sterling 23%. But in euros it is up only 12% and in yen a meagre 5%. And if buyers in these currencies need further encouragement, the technical background, admittedly measured in dollars, shows the consolidation of recent weeks could be nearly over, because the rising 55-day moving average should begin to underwrite the gold price.