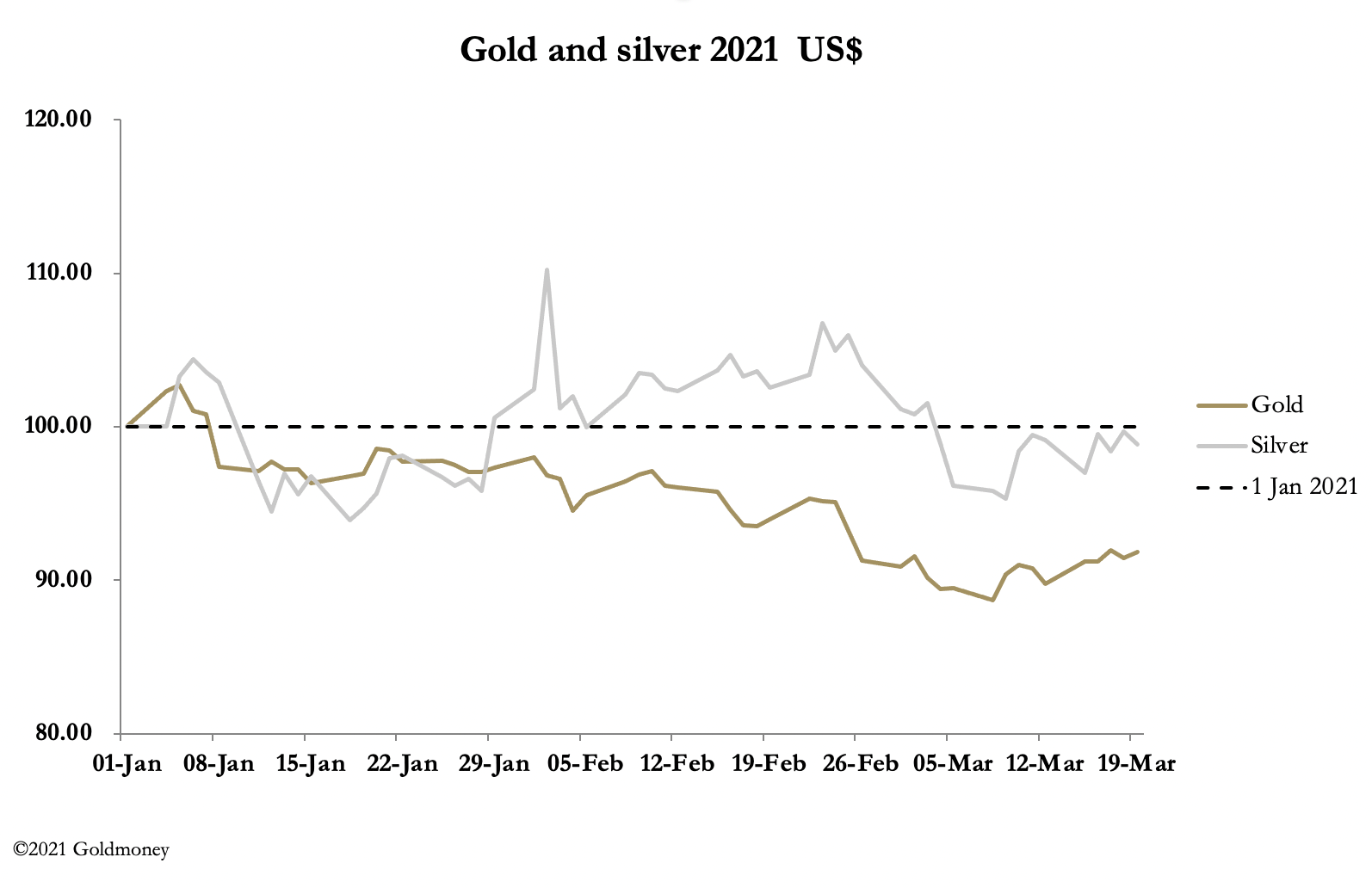 Gold and silver were quietly firm this week, with gold trading at $1738 in European morning trade, up $10 from last Friday’s close, and silver at $26.02, up 12 cents on the same time scale. Unspectacular perhaps, but the market has a good underlying feel to it. Every morning, we awaken to find prices have been lower overnight in Asia to subsequently recover, except this morning when they opened higher at the off and have then drifted lightly.

Lower prices in Asia are counterintuitive, because Indian demand for physical is strong and China certainly is not selling. In February, withdrawals from the Shanghai Gold Exchange were over 92 tonnes — admittedly down from January’s 159 tonnes, but nearly three times domestic mine output. There is only one valid conclusion, and that is bullion banks’ attempts to manage prices lower in these inflationary times have concentrated their efforts outside US market hours.

The big story this week has been continuing rises in bond yields, and our next chart shows the damage done to US 10-year Treasuries. 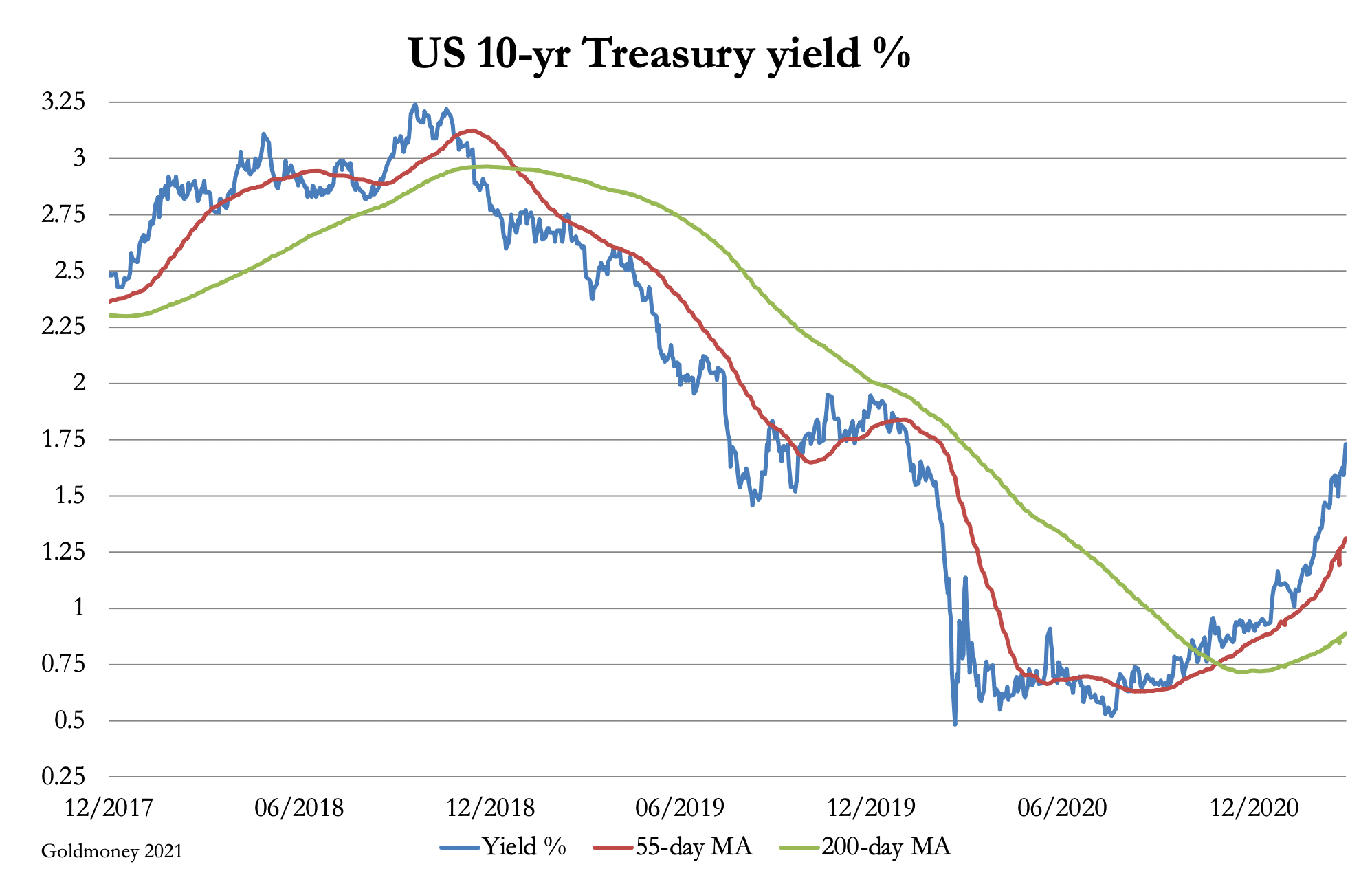 We expected this rising trend and alerted readers in these reports when the golden cross formed back in November last year. But the 75% increase since 1 February has been more rapid than expected, and the regular FOMC statement on Wednesday did not cool things down, as many expected. The only material change in the statement was the increase in reverse repo counterparty exposure from $30bn to $80bn, which allows for the temporary increase in money market funds from Biden’s stimulus to be absorbed.

There was no statement about extending the suspension of the supplementary leverage ratio, due to end this month. There is some speculation that the banks have not needed it, putting 90% of bond purchases into bank portfolios with only 10% being held by their broker-dealers. Jay Powel promised a statement on this shortly.

By confounding those who think bond yields have gone too high too fast, it appears that the bond market is undergoing a re-rating to fundamentally higher yield levels. A growing appreciation of the consequences of unprecedented increases in global money supplies on price levels supports this thesis. But what of the effect on gold and silver prices?

It should be borne in mind that fiat currencies and gold have fundamentally different interest rates, and there is no connection between the two. The myth that gold pays no interest while fiat does is a misunderstanding based on a faulty comparison. Physical gold and cash notes pay no interest, but lending both out to other parties does. That said, in a fiat money world, gold positions are financed by fiat, and there is often a temporary influence between higher fiat interest rates and the gold price. But that is only significant in a market where speculators have borrowed fiat to buy gold, which is not the current situation.


That is why a substantial upward rerating of bond yields is not — so far at least — driving gold and silver prices lower. The former is only destabilising fiat money markets. Ultimately, it leads to a rising gold price, as the 1970s decade illustrated.