Following last week’s expiry of gold’s April contract on Comex, the price has been subdued, at one point yesterday dipping to test the $1280 level before recovering about $12. In early European trade this morning (Friday) gold was trading at $1290, down $1.50 on the week, and silver was at $15.17, up four cents from last Friday. 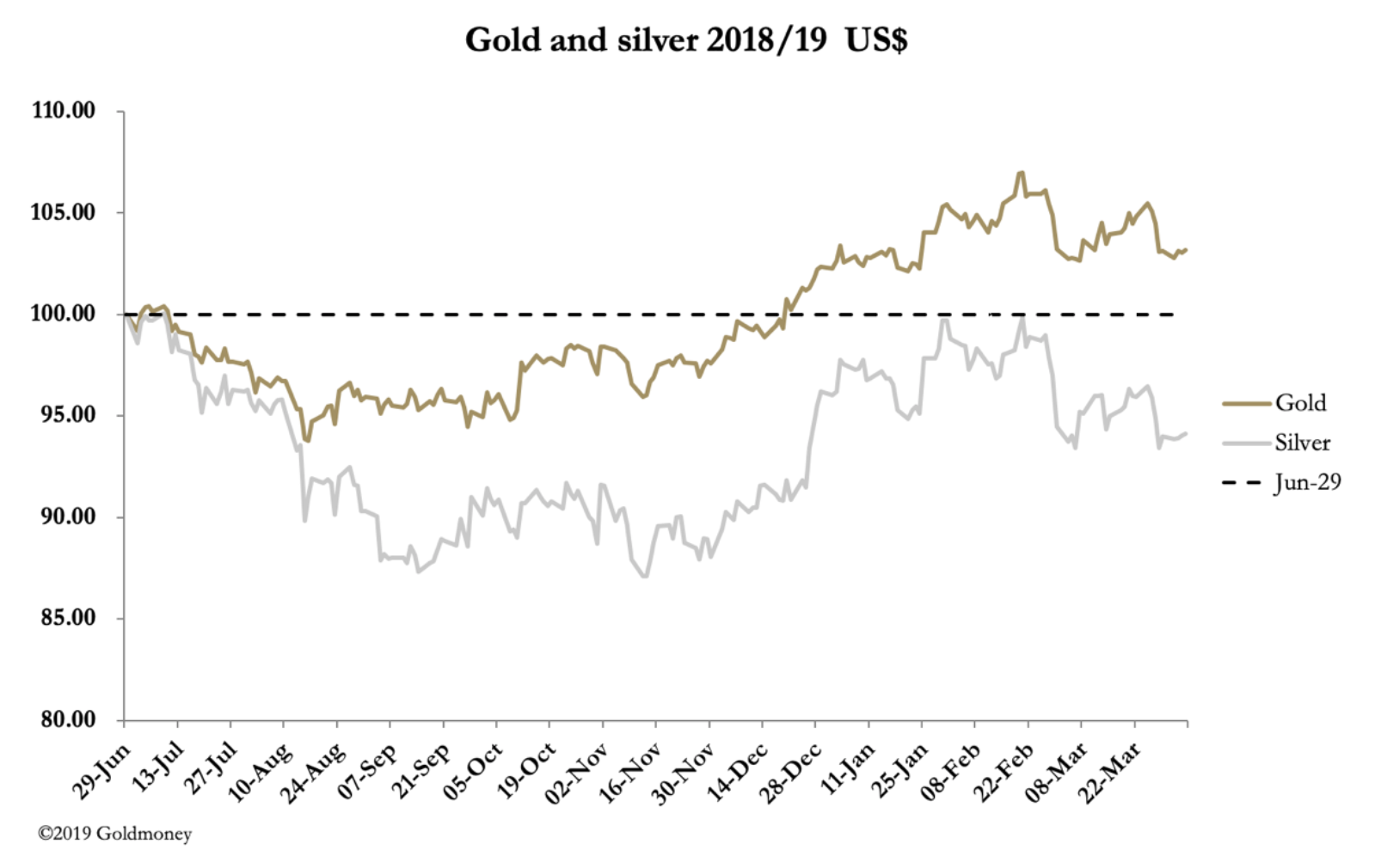 It has been a bizarre week for platinum group metals, with platinum rising over 5% on the week and 12.6% on the year. Meanwhile, palladium is consolidating after its recent falls and is now up 9% on the year having been as much as 27.7% while hitting an all-time record high of $1618.

For gold and silver, it has been a week of drifting sentiment with muted futures volumes for gold, but slightly healthier for silver. Our next chart is of gold’s open interest on Comex.

The collapse of open interest is spectacular and reflects the April expiry. Against this background, the gold price looks to be fairly resilient, confirming hedge fund long interest is very low. When OI expands, it is likely to take the gold price higher. Meanwhile, silver is like cheese to gold’s chalk.

As mentioned above, turnover in silver is more robust than in gold while OI remains above 200,000 contracts. The difference with gold, perhaps, is silver is behaving more like a commodity, and gold as money.

The rival money to gold, the dollar, has held up well, as shown in our next chart, of the trade weighted index. 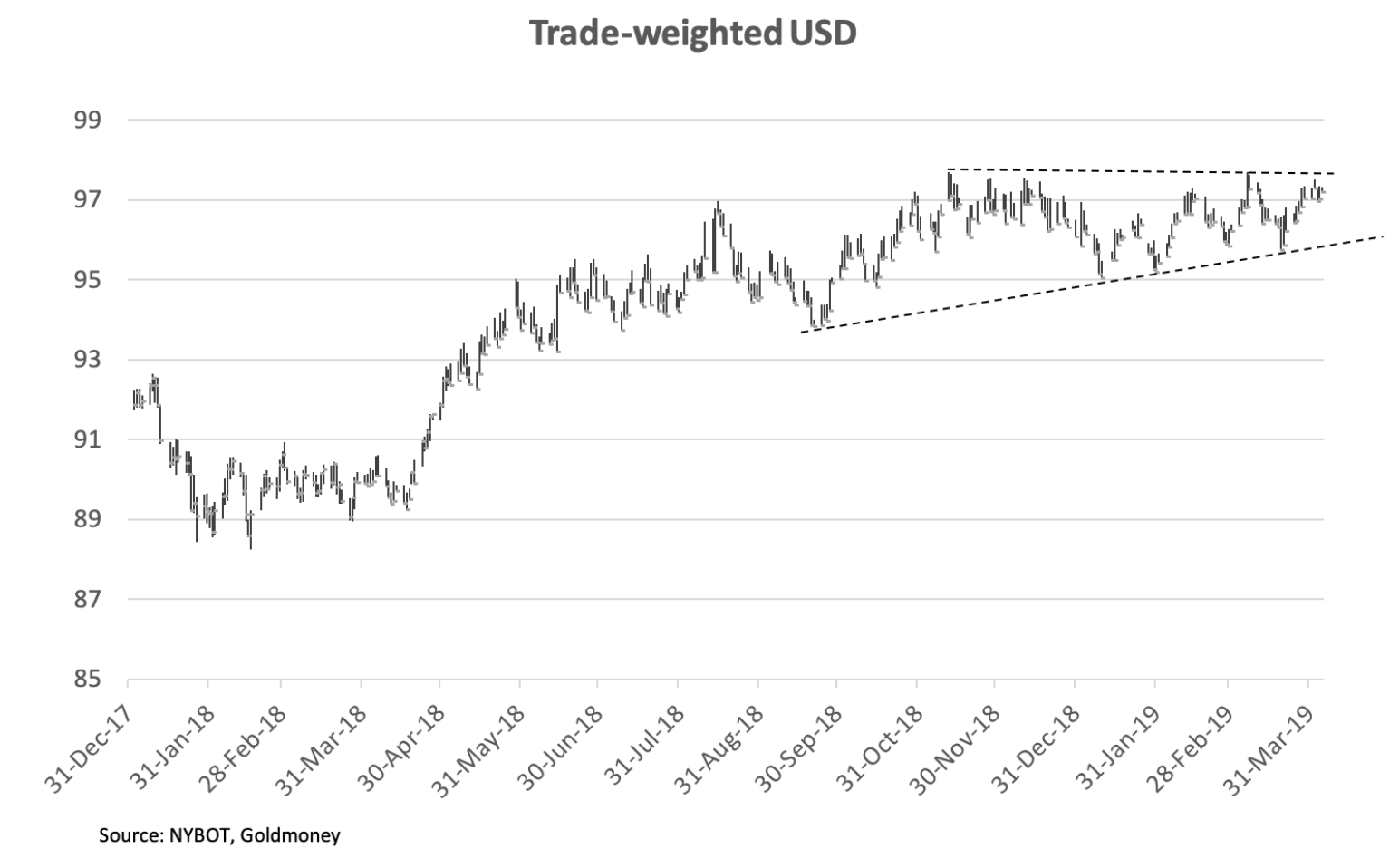 It appears to be firmly underwritten by the lower dotted line, and odds-on to eventually break through on the upside. Bearing in mind the euro is over 50% of the dollar’s TWI, it probably tells us more about the euro than the dollar. However, there is a bullishness emanating from the Trump camp, having seen off the Mueller report and put the Democrats under pressure. His administration’s confidence is bound to feed into financial markets, and perhaps the dollar itself.

The real concern remains over trade with China. This problem is being kicked into the long grass, which is unsatisfactory. Trump appears to be more interested in tariff income than the economic downside, and that is ultimately dangerous.

Technically, gold appears to be in a normal consolidation against the dollar, and this is our next chart. 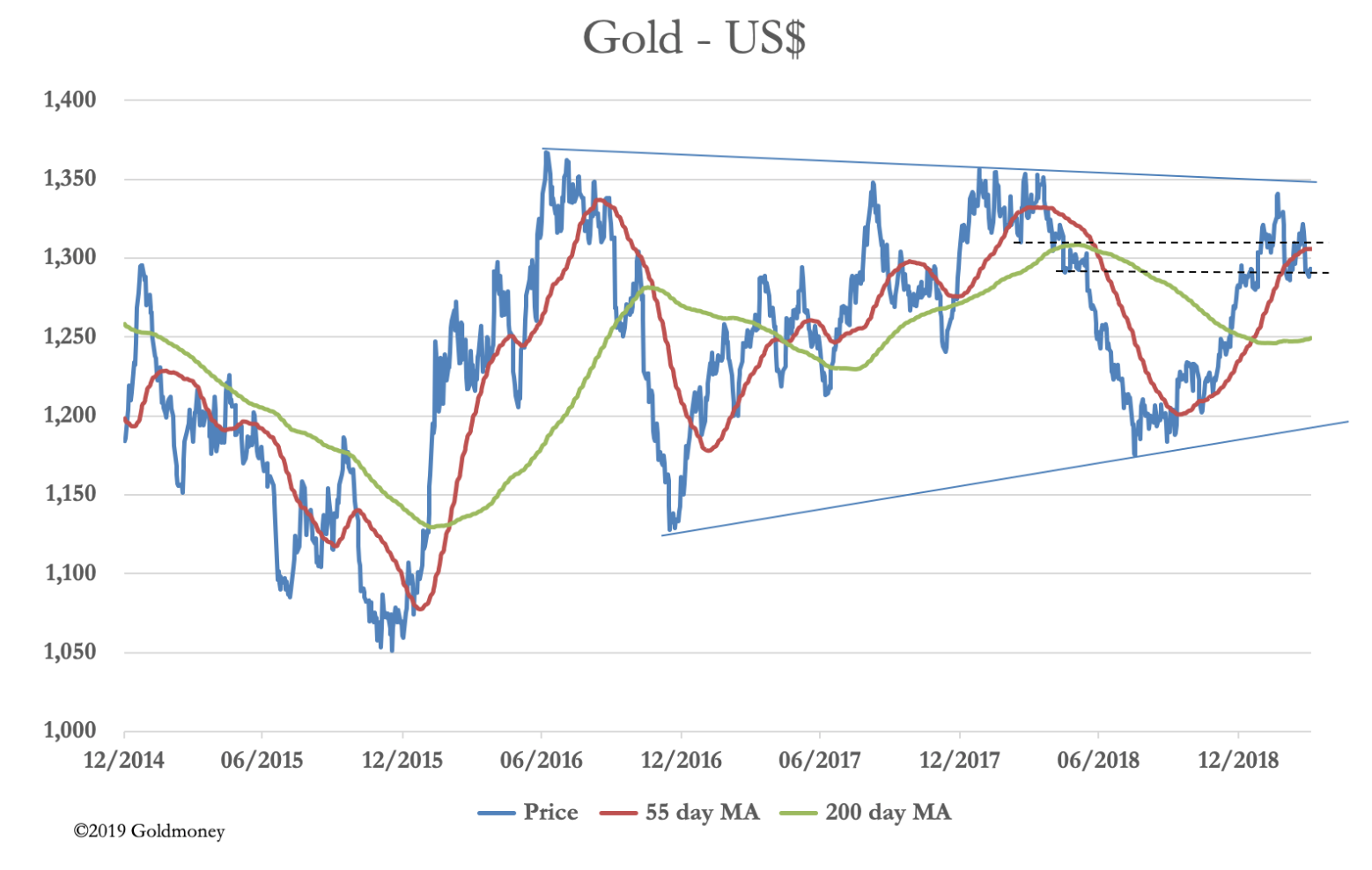 There is a growing risk, perhaps, that gold will drift lower to test the 200-day moving average before resolving the 3-year price consolidation. The 55-day moving average is now above the price and losing momentum. It is not the end of the world for gold but could become a temporary setback in the event the dollar moves higher.

To some extent, gold’s lacklustre prospects in the very short-term is a mirror image of rallying stock markets, and growing dollar confidence. However, a dispassionate analysis of the global economic and financial outlook suggests that financial markets are in the process of topping out and risks for the global economy are building.