By Alasdair Macleod
Market Updates August 17, 2018
Gold and silver prices crashed this week as financial money flowed into the dollar. Gold was down $35 from last Friday’s close to trade at $1178in early European trade this morning (Friday), and silver was down 60 cents to $14.72. It was not only precious metals, but everything from currencies to copper that got hit. 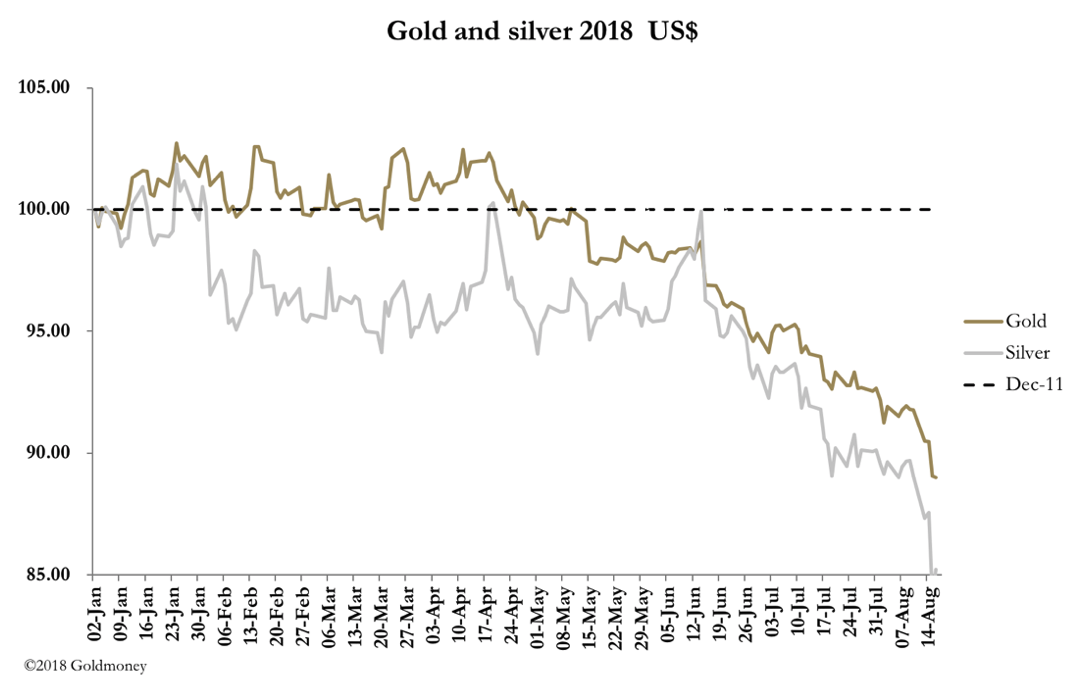 It is, quite simply, a panic into the dollar, and has little to do with gold. Behind the panic is a growing belief, driven by fears that the small rise in the Fed Funds Rate and the Fed’s reduction in its balance sheet, that monetary policy is driving the world into a debt crisis. That being the case, it is assumed there will be a panic to buy dollars to pay off dollar-denominated debt.

As if that wasn’t enough, President Trump is weaponizing the dollar by threatening those that cross his path with trade tariffs. The list is growing: the EU, Russia, China, Iran, Canada, and now Turkey. Unsurprisingly, currencies are being destabilised. This week it was the Turkish lira, and that has brought into focus a range of other currencies that are inherently weak anyway, including the rand and the rupee.

It is hardly exaggerating to say it’s America versus the rest of the world. The commentary and the speculative money-flows are US-centric, so it’s understandable that the betting is a debt-driven recession will lead to foreign demand for dollars. But the analysis is faulty, because according to the New York Fed itself, foreigners through correspondent banks already have dollar-balances of over $4 trillion, and portfolio investments in US securities were last shown at $18.4 trillion. In other words, foreigners have already invested in a quantity of dollars that exceeds US GDP.

Far from the rest of the world being dollar debtors, they are in fact dollar creditors.

While currency management in emerging markets leaves much to be desired, and some countries, such as Turkey, are dollar debtors at a national level, it appears dollar demand is inherently speculative. This often happens at major turning points, driven by heightened fear and greed. During the Lehman crisis for instance, gold fell from $915 to $725, before more than doubling. This time the dynamics are different, but the emotions the same. Sell gold at any price to buy the safe dollar.

It is impossible to say when and at what level the dollar will peak, but given the foreigners already own it, the turnaround is likely to be swift when the panic subsides. There are two visible endings to this panic. Firstly, the Chinese recognise that President Trump needs to deliver a positive result to the American electorate ahead of the mid-term elections in November, and it’s no skin off their noses to cobble together a face-saving trade agreement. Secondly, fears of a recession and a strong dollar may persuade the Fed to delay rate rises and take a softer monetary line.

Precious metals, along with everything else that’s not the dollar, will then rebound. The bullion banks are now very long of gold contracts on Comex and have a vested interest in squeezing the hedge fund shorts, hard. That is the reality, not the emotion.