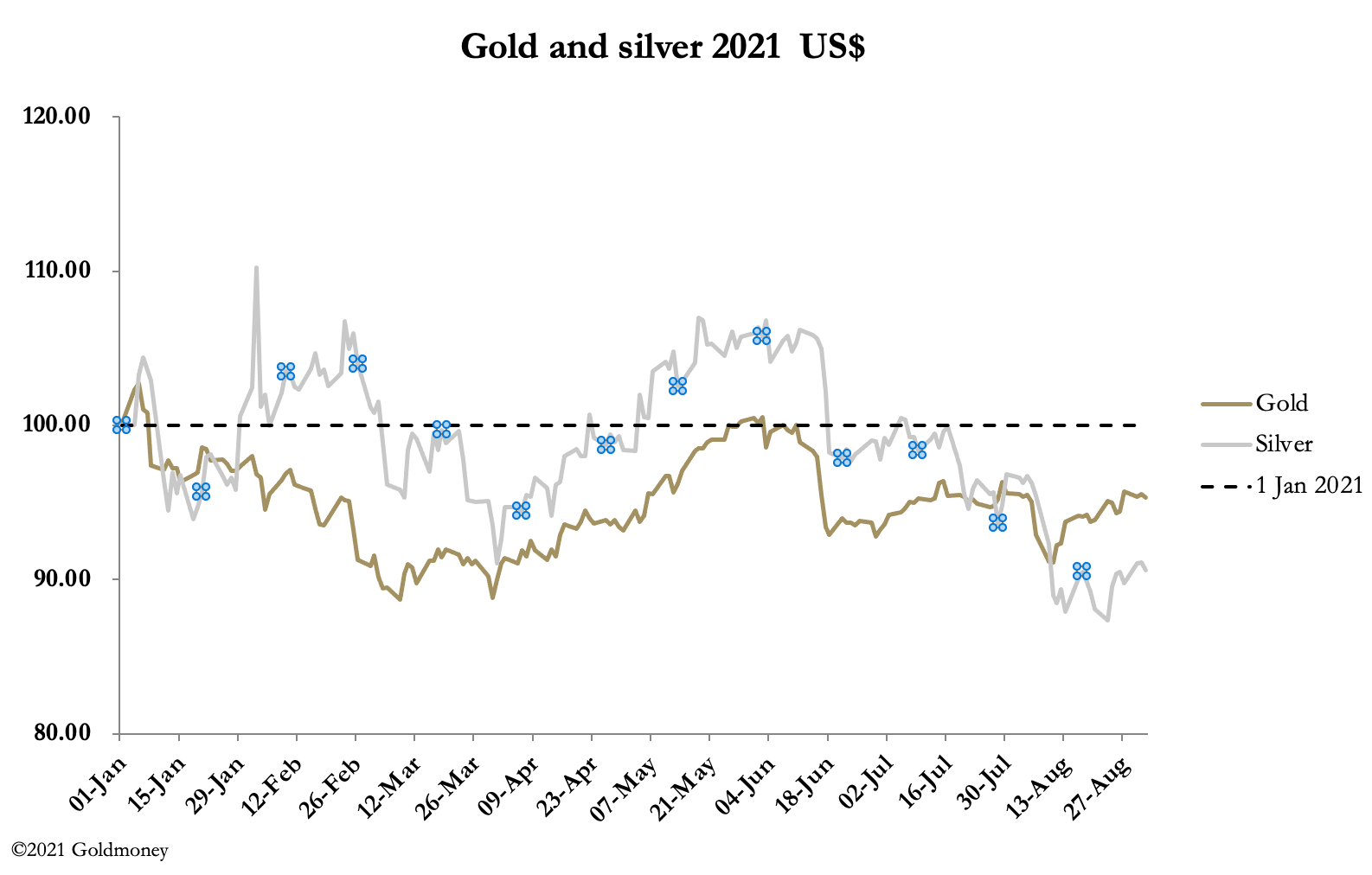 In very quiet trading, gold and silver continued to consolidate at the $1800 and $24 levels respectively. On two days this week, Comex gold volumes dropped to below 130,000 contracts, against an average of over 250,000 contracts in normal trading conditions. And turnover in the silver contract fell to under 40,000 contracts against more normal volumes of double that.
In European trade this morning, gold was at $1813, down $3 from the previous Friday’s close, and silver at $24.00, unchanged. Silver’s open interest is very low, as the next chart shows.

It is almost back to the levels following the organised takedown of precious metals, when Open Interest in late February 2020 fell from 244,705 contracts to 131,830 in early May. Having taken out the weaker bulls the price then ran up from $11.80 to $28.90 the following August. Putting the dramatic collapse in open interest to one side, there are similarities in the factors likely to drive prices from here. The Swaps category net position is even, which is where they were in May 2020 after the takedown. This is our next chart.

The point is that the low level of open interest combined with the Swaps’ clear interest to maintain a balanced book is potentially very bullish for silver.

Trading silver futures differs from that of gold, because the miners, over half of which primarily extract other metals, tend to run larger silver hedges proportionately than in gold. The story in gold is therefore somewhat different, but its Open Interest is down as well, which is our next chart.

Open Interest has been showing some resilience to further falls, rising above 500,000 from lows of 450,000. Unlike the position in silver, the Swaps are stuck with short positions they can’t close. Our next chart highlights the difference from the silver position, at net short 179,512 contracts, with every dollar change being worth $18m. This is where the establishment’s real problem lies. 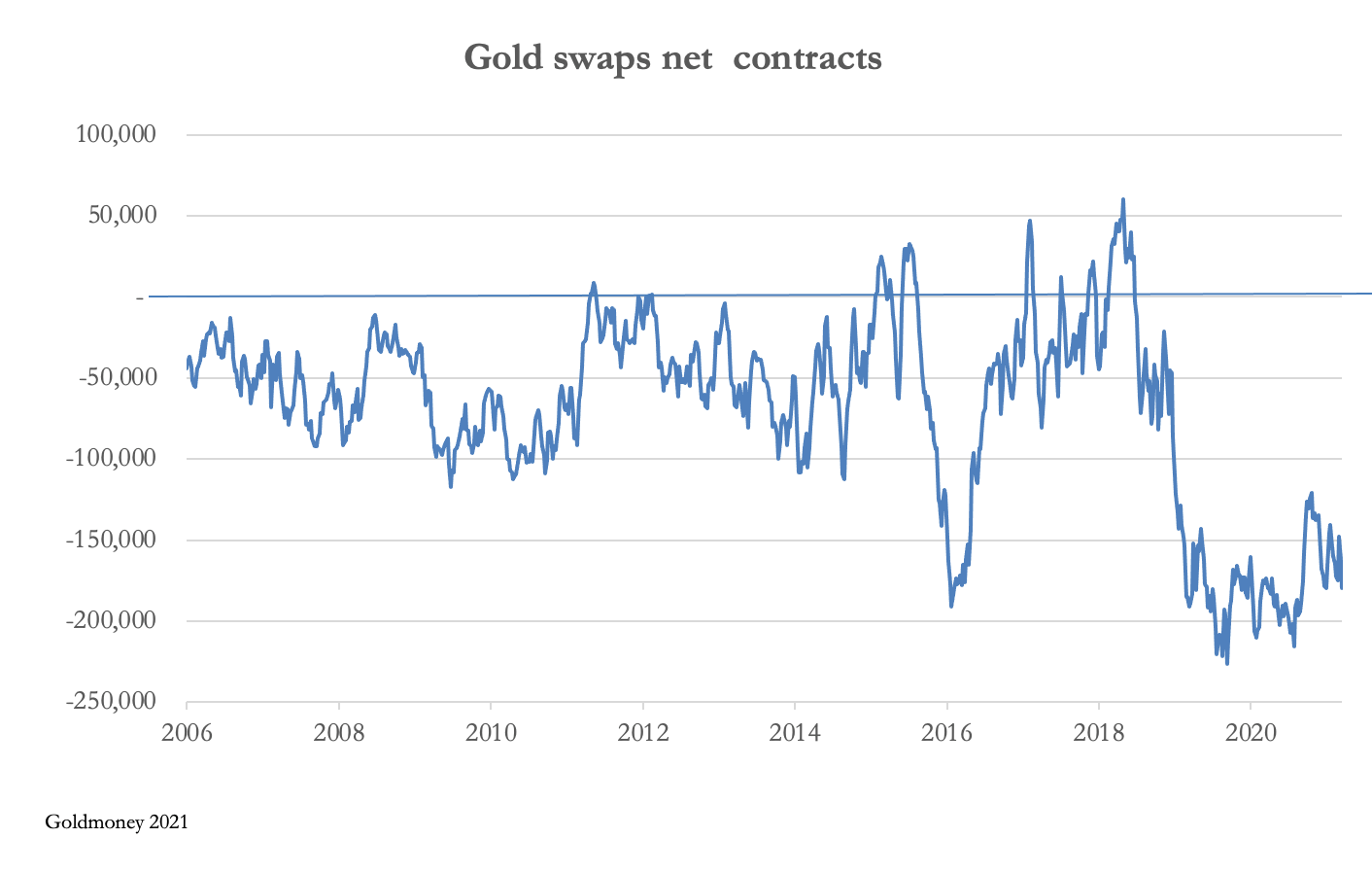 The monetary value of the Swaps net position is $32.6bn. They face a huge problem. Headline price inflation measured by US CPI(U) is at 5.4%, which simplistically tells us that real interest rates are deeply negative. And it’s not just US dollar rates: Eurozone HICP inflation is recorded at 3% and rising, while the ECB’s deposit rate is at minus 0.5%.

Schiffgold makes the point that German investors, traditionally wary of inflation, are loading up on gold. And to help supply public demand for physical metal around the world, Comex has turned into a delivery market. This week, 93,500 ounces have been delivered out of the gold contract, and 24,055,000 ounces of silver.

The combination of rising prices and high negative interest rates effectively put gold and silver into strong backwardation, a point which is barely understood in the investment establishment, which wrongly looks at implied lease rates. It will be a short leap from gaining that knowledge to understand that real money is gold and silver its handmaiden, not ephemeral fiat.