Gold and silver prices consolidated recent gains this week, both having become overbought short-term, and they now appear to be building a base before an attempt to convincingly attack higher ground, though yesterday's price reaction was quite sharp.

The recent slightly overbought situation for gold is shown in the chart below, which is of the Comex Managed Money category net position: 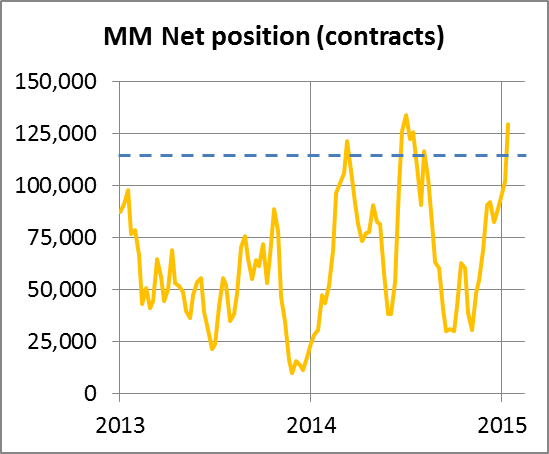 The dotted line is the average net long position (since 2006), so we can see that net longs are slightly higher than that average. This tells us that fund and hedge fund managers have undergone a huge shift in sentiment over the last two months. 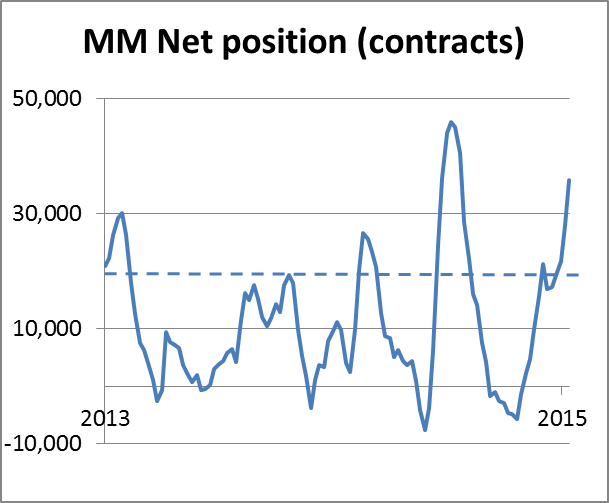 Again, the dotted line is the long-term average net position, indicating that silver's strong rally needs some consolidating. Any pause in the news flow is an opportunity for the bullion banks to mark the price down in the hope they can close some of their short positions, and that is what happened yesterday, with gold driven down over 2% and silver by nearly 6%.

Last time the Managed Money category was as bullish was in July last year, when gold ran up to $1330 and silver to $21. Gold and silver then fell back to new lows, so will this happen again?

Time will tell, and there is no doubt some of the large trading banks have a vested interest in seeing lower prices. But in mid-2014 markets were coming to terms with the end of the Fed's quantitative easing programme; this time we have the ECB's QE about to be implemented.

So background monetary fundamentals for gold and silver appear to be improving, with the ECB having announced this month quantitative easing of €60bn per month from March onwards. Ahead of this announcement the Swiss National Bank decided to abandon its peg to the euro, injecting a high degree of currency instability into European markets. These developments are more likely than not to produce European buyers for gold over time, and it is worth noting that, priced in euros, gold is already some 25-30% up from its recent lows.

Also in Europe there have been significant losses from the Swiss franc reaction, and the Greek banking system is suffering depositor withdrawals. It would, however, be wrong to expect too much impact on gold and silver from these events, until there is firmer evidence they could be systemically destabilising.

The bigger news is currencies. With both the Bank of Japan and the ECB determined to weaken their currencies against the US dollar, we have the makings of a return to deliberate devaluations, which is more likely to encourage Japanese and European buyers for bullion.

In other news, the Shanghai Gold Exchange has been delivering large quantities of gold into the wholesale markets, with a further 70.63 tonnes last week, making a total of 201.67 tonnes for the first three weeks of January. Note how rising prices have not deterred Chinese demand.