Gold and silver continued to strengthen this week, both seeing new closing highs for the year. Gold rose by $12 from last Friday’s close to trade at $1510 in early morning European trade and silver by 15 cents to $17.11. 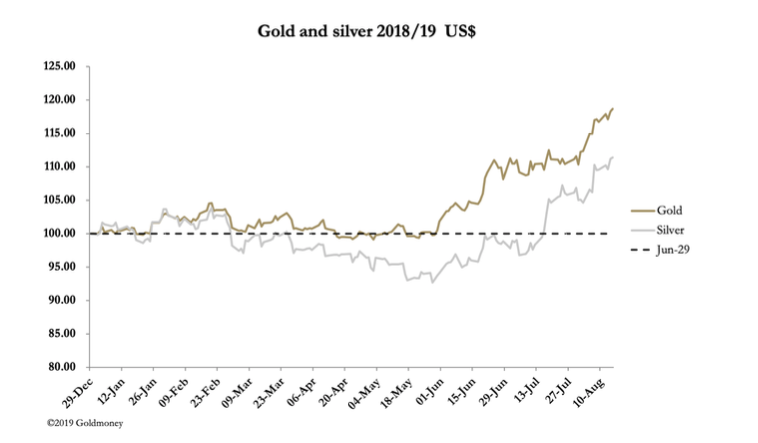 For the last seven trading sessions, the pattern appears to be another running correction with each dip finding buyers at rising prices. The one exception was extreme volatility on Tuesday, when gold traded as high as $1535 then as low as $1480 before bouncing back to close at $1501. The cause was Trump’s announcement he would postpone tariffs on Chinese consumer goods as a Christmas gift to US shoppers. Immediately, this was seized upon as a climb-down. Rather, it shows confusion in the White House. Someone probably warned him that tariffs will drive up the rate of price inflation, making it difficult for the Fed to reduce interest rates.

If there is a day for manufactured news, more often than not it’s a Tuesday, coinciding with the recording of Comex’s commitment of traders figures, due to be released after-hours today. That probably contributed to the volatility on that day.

Despite a marvellous run, Comex gold futures are not as overbought as they have been, with open interest about 10% below highs before the August contract ran off the board. This is shown in our next chart of open interest and the price.

An interesting pattern can be observed, with the last two active contract expiries failing to dent the price. Normally, contract expiry is the opportunity for bullion banks to smash the price and take out hapless speculators profitably.

Technically overbought conditions almost always call for caution. Now that gold is obviously in a bull market, there must be significant buying in the wings just waiting for an entry point. This is why the floor under the price seems to shift upwards just out of reach of wannabe bulls. This is illustrated in our technical chart below. 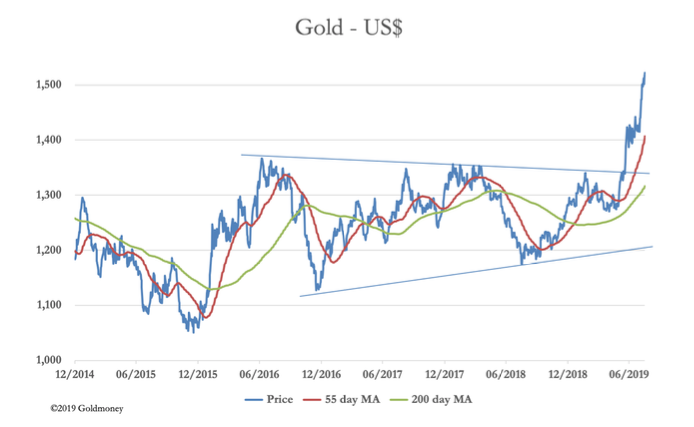 Anecdotally, we are all aware that potential bulls were holding off wanting to see gold break through the $1350-65 level, which had been tested four times previously before failing. This time the price roared through it, with serious traders and sceptical investment managers frozen out of the market. Hence, the unprecedented bullish momentum has persisted.

Besides Trump’s Christmas gift of postponed tariffs on consumer goods, the other interesting snippet was a Reuters report on Wednesday that “China has severely restricted imports of gold since May”. The report presumes that China is curbing outflows of dollars. This is likely to be poppycock, given that despite Trump’s tariffs China is still earning substantial amounts of dollars she would rather dispose.

Assuming the report is true, that almost no gold import quotas are being issued in China, it is more likely China is giving state-owned banks a bullion monopoly. China is now accumulating monthly gold reserves. At a time of increasing global financial, economic and political instability, it would make sense for China to tighten control over the physical gold market in this way.