Precious metals lost ground this week in a disorderly run-off of the April gold contract on Comex. From last Friday’s close, gold was down $34 at $1288 in early-morning European trade this morning (Friday), and silver lost 44 cents to trade at $15. The most notable casualty was palladium, which after its meteoric rise (doubling since August) fell 15% on the week to $1340. 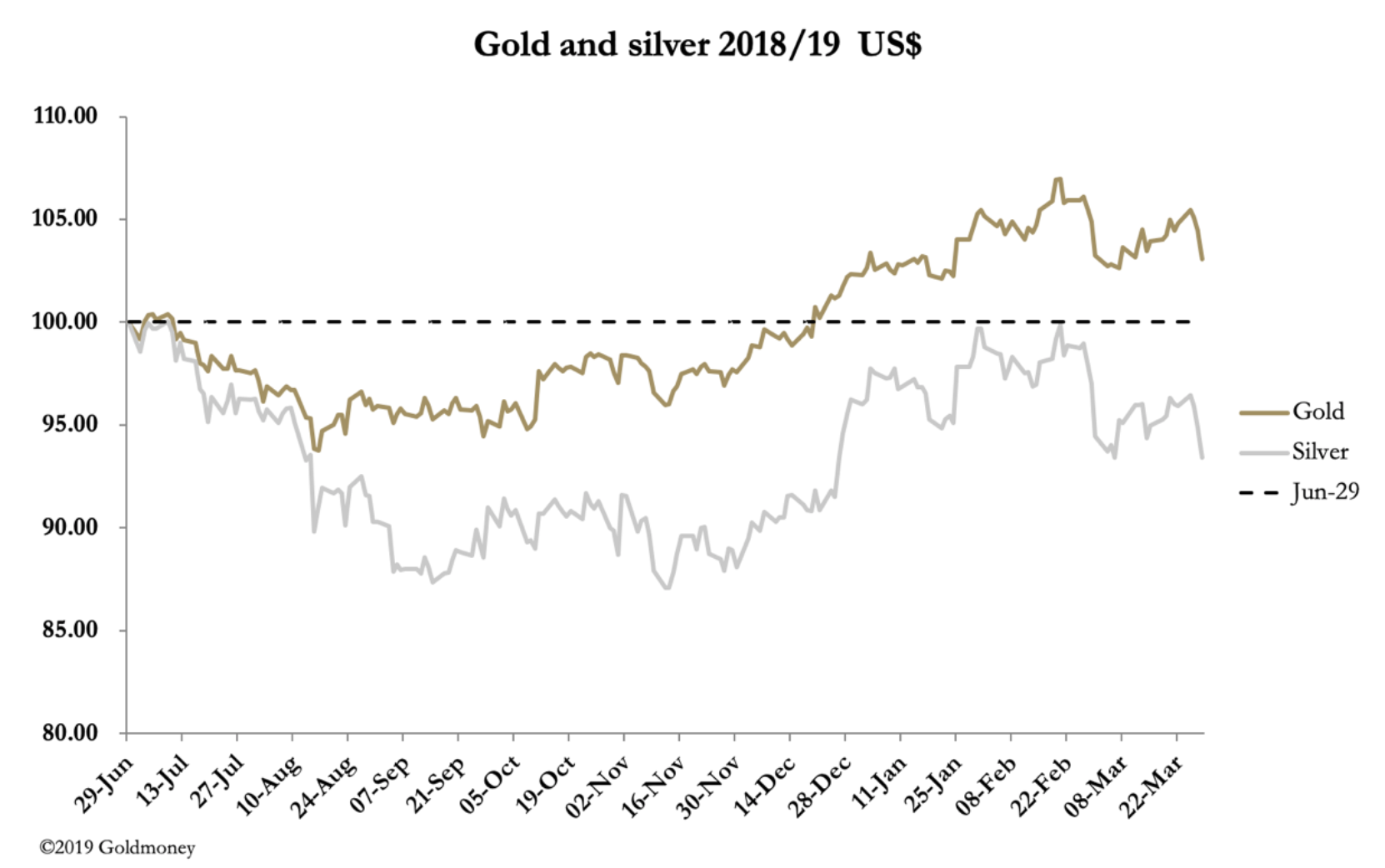 These events appear to be connected to the quarter-end. Gold is easier than palladium to manipulate, because the market has depth. Palladium has no liquidity, and a bullion bank caught short has very limited means of squaring its books. Undoubtedly, much of palladium’s price rise has generated some self-feeding speculative interest, but how do you shake it out? You frighten speculators by trashing their other positions, which are likely to be in gold and silver.

Palladium’s open interest on Comex fell less than 3,000 contracts over the week to 24,340 last night. The remaining ones will be marked-to-market in the bullion banks’ books at the quarter-end, leaving substantial losses. The same was true of their positions in gold, which after this week’s fall are now back to their year-end valuations. With its underperformance, short positions in silver have been profitable.

The opportunity was presented by the high level of expiring April contracts. Last Friday, there were 155,220 outstanding to be sold, switched or stood for delivery this week. It was prime time for short bullion banks to put on the frighteners, and that’s what they did.

Additionally, the dollar was marked up against a weak euro (its main trade-weighted component) and weakness in some other currencies (notably the Turkish lira).

This sets the scene for next week. Many traders have misread the euro, selling sterling to buy it, not realising perhaps that the real loser in a no-deal Brexit will be the euro. Additionally, concerns are mounting over Deutsche Bank, which is trying to raise €23.6bn in debt and equity ahead of its planned merger with Commerzbank. There are enough grounds to fear the real reason is the auditors cannot sign off on the merger, which put another way means Deutsche Bank is not just insolvent but will cease to trade without these funds. The last thing the Eurozone needs is for Deutsche to go under, because it will probably take Commerzbank with it. If the heart of the German banking system collapses, the repercussions will be unthinkable.

Perhaps it won’t happen. But that is no reason not to be cautious and shift some liquidity from euros into dollars.

The effect on precious metals could go either one of two ways. A renewed flight out of euros into a strengthening dollar suggests continuing weakness in precious metals, at least until there is more tangible evidence of a banking crisis in Germany. Alternatively, one could argue that investor demand for gold emanating from the Eurozone is likely to push the gold price higher, bearing in mind the general shortage of physical metal.

Time will tell. Meanwhile, here is the performance of the gold price in the major currencies since the current bull market began. 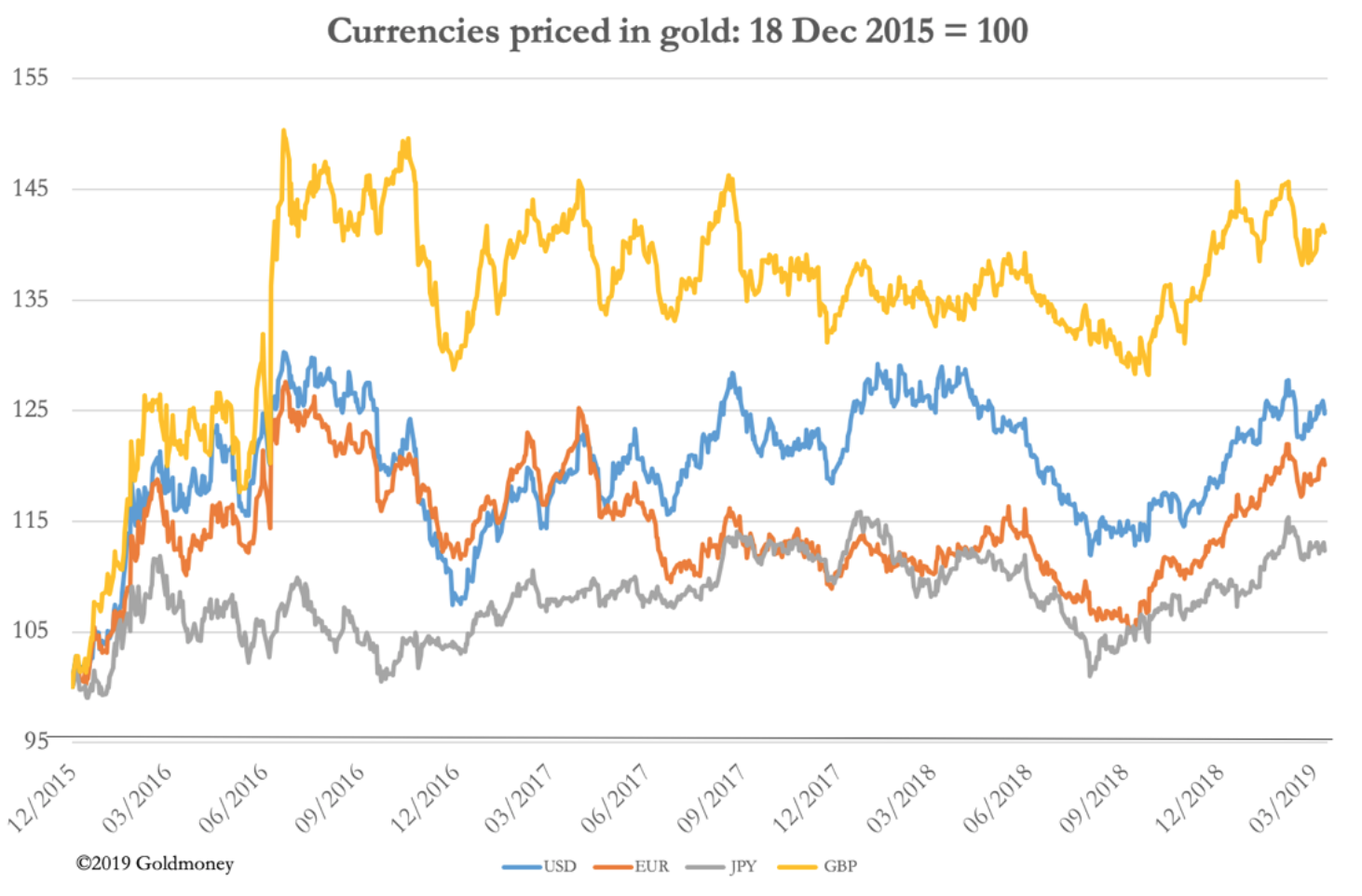