On Wednesday the price moved between down $25 on the latest opinion poll on the Swiss referendum, then recovered to $23 before falling again on the release of the Fed's FOMC minutes. However, despite these unsettling swings gold rose on the week by about $30 overall, making it two weeks in a row as shown in our first chart. 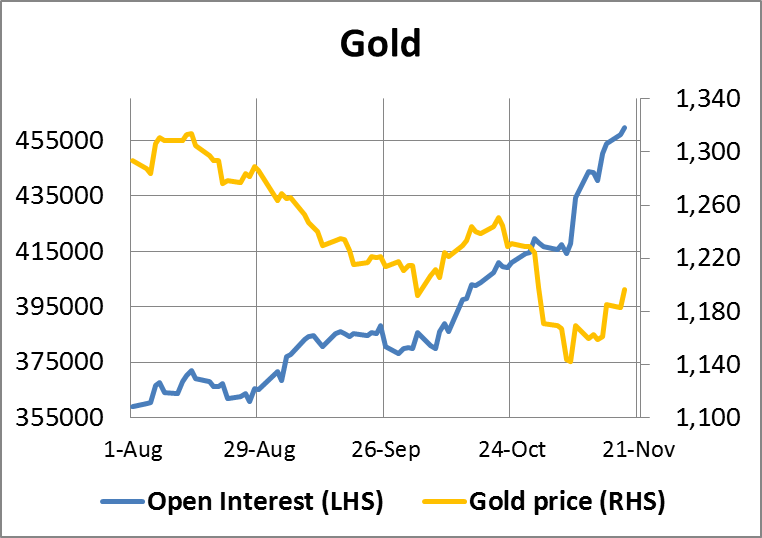 Open interest on Comex also continued to increase, which is healthy because it indicates fresh buying instead of bear-closing (closing of existing short positions should lead to a contraction of open interest).

Having broken down through major support at the $1180-$1200 level which had held for eighteen months, one would expect gold to consolidate before attempting to break back up through it. If and when it does break convincingly upwards, gold will be sending a strongly positive technical signal.
Silver followed a similar pattern, and the corresponding supply level is at $17. 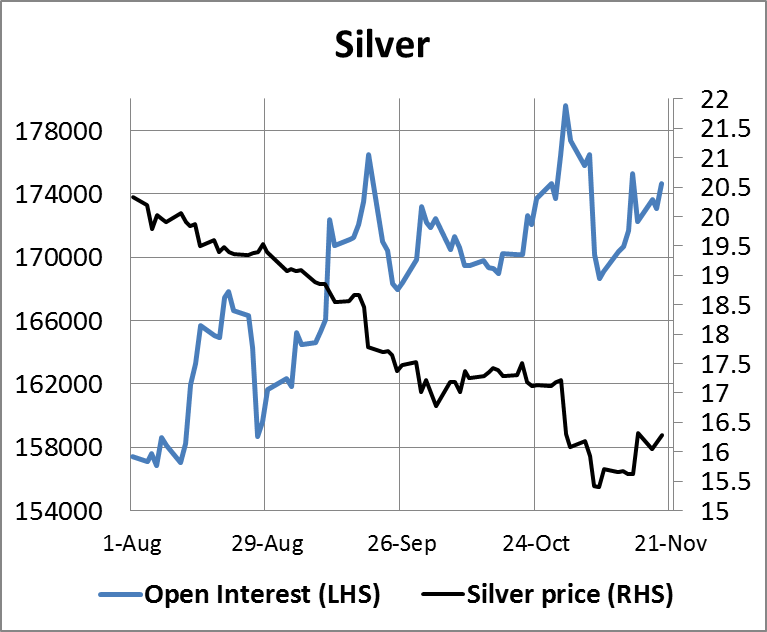 There is little more to say about silver at this juncture, while there is so much going on in gold. This week the backwardation between physical spot gold and one month forward delivery in London has persisted at over 0.2%, which is extreme. Until the acute shortage of bullion is resolved, it is hard to see how the price of gold can go much lower.

There is little sign of this shortage being satisfied. China's public demand continues to absorb almost all global mine supply with Shanghai deliveries of 227 tonnes in October alone, and a further 106.5 tonnes in the first two weeks of November. Indian demand continues at a high level with 106.3 tonnes imported for October, about four times the shipments of a year earlier. These two countries accounted for 335 tonnes of bullion last month, while gold mine supply ex-China is only 200 tonnes per month. It is a fair assumption that all other Asian states are also seeing reasonable demand, partly because gold is the Asian family's "pension fund", and partly because prices are extremely attractive.

It's hardly surprising the physical market is so tight. The head of Russia's central bank, Elvira Nabiullina, in a statement to the Russian parliament said that the central bank had bought 150 tonnes of gold this year. It is a fair bet that oligarchs close to the government have noted this buying and may be accumulating bullion as well. And with a collapsing yen, the Japanese appetite must also be being encouraged.

The only official disposer of gold has been the hapless Ukrainian central bank, which reported this week that virtually all its gold, which was 42.3 tonnes at the end of last year, has simply vanished.

In economic news, last week's G20 meeting produced nothing of immediate interest with leaders promising to encourage economic growth of an extra 2%. The FOMC meeting also said little, only indicating a lack of concern about events outside America, which is understandable given that the US has a very large internal economy with relatively minor reliance on foreign trade.

However, economists are now revising their US growth expectations downwards, reflecting the polar vortex which has frozen and immobilised much of the country.