Market Report: A beautiful bigly squeeze to end the year

Doubtless, that is what this year-end rally would be called in Trumpian lingo, and the “bigliest” of squeezes is in silver, where shorts have been closing more rapidly than longs being opened, leading to a fall of 13,000 contracts as the price rallied. That is very unusual. 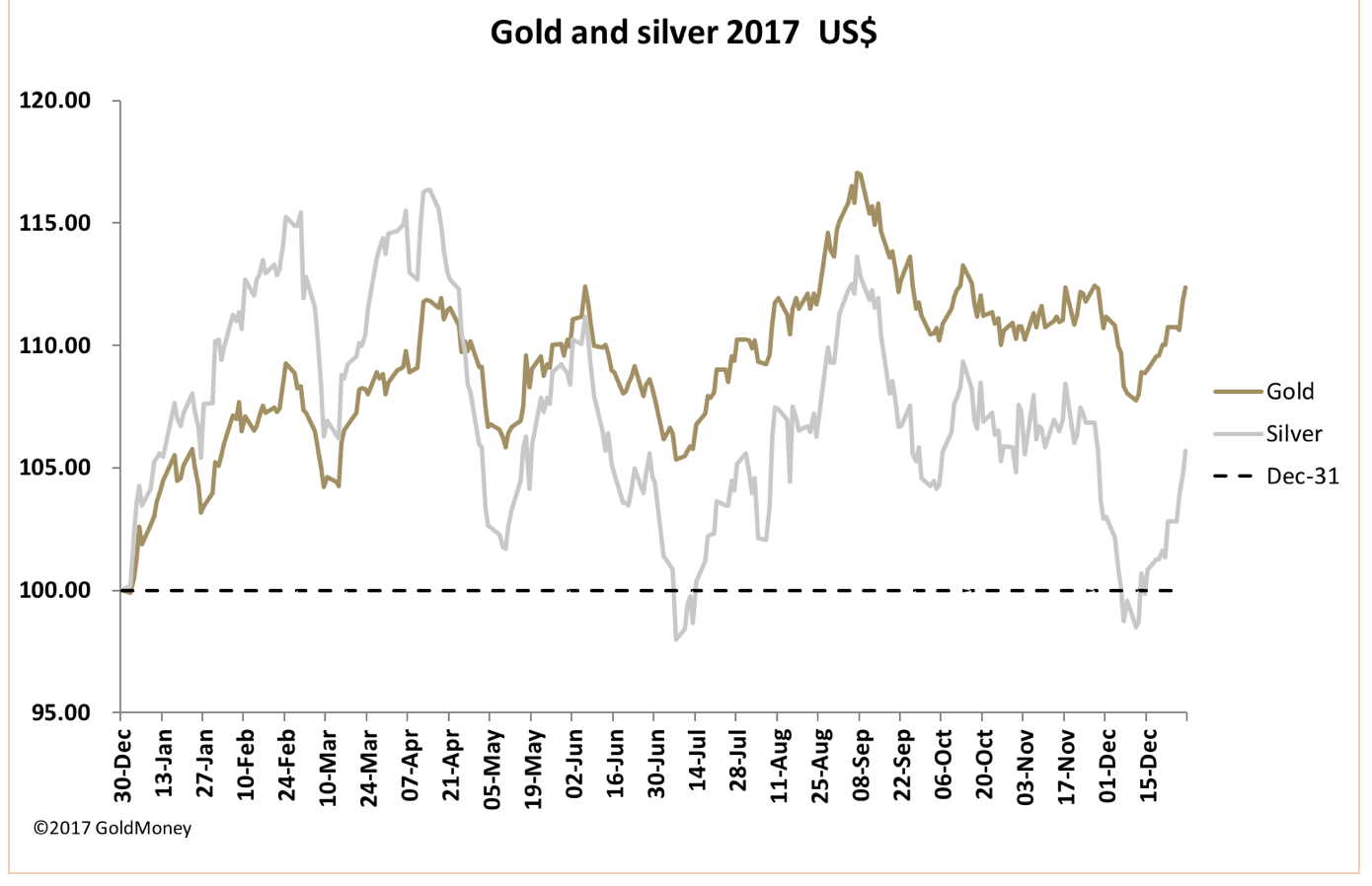 Gold and silver had another good week, correcting the oversold conditions of early December. Gold rallied a further $19 from last Friday’s close, to $1296.5 in early European trade this morning, and silver by 47 cents to $16.86. That leaves gold up 12.4% since January 1, and silver up 5.7%. Silver has lagged gold badly this year, so on that basis appears undervalued relative to gold. However, since the turn on December 11, silver has begun to outperform gold again.

Our second chart shows gold’s performance against the other major currencies. 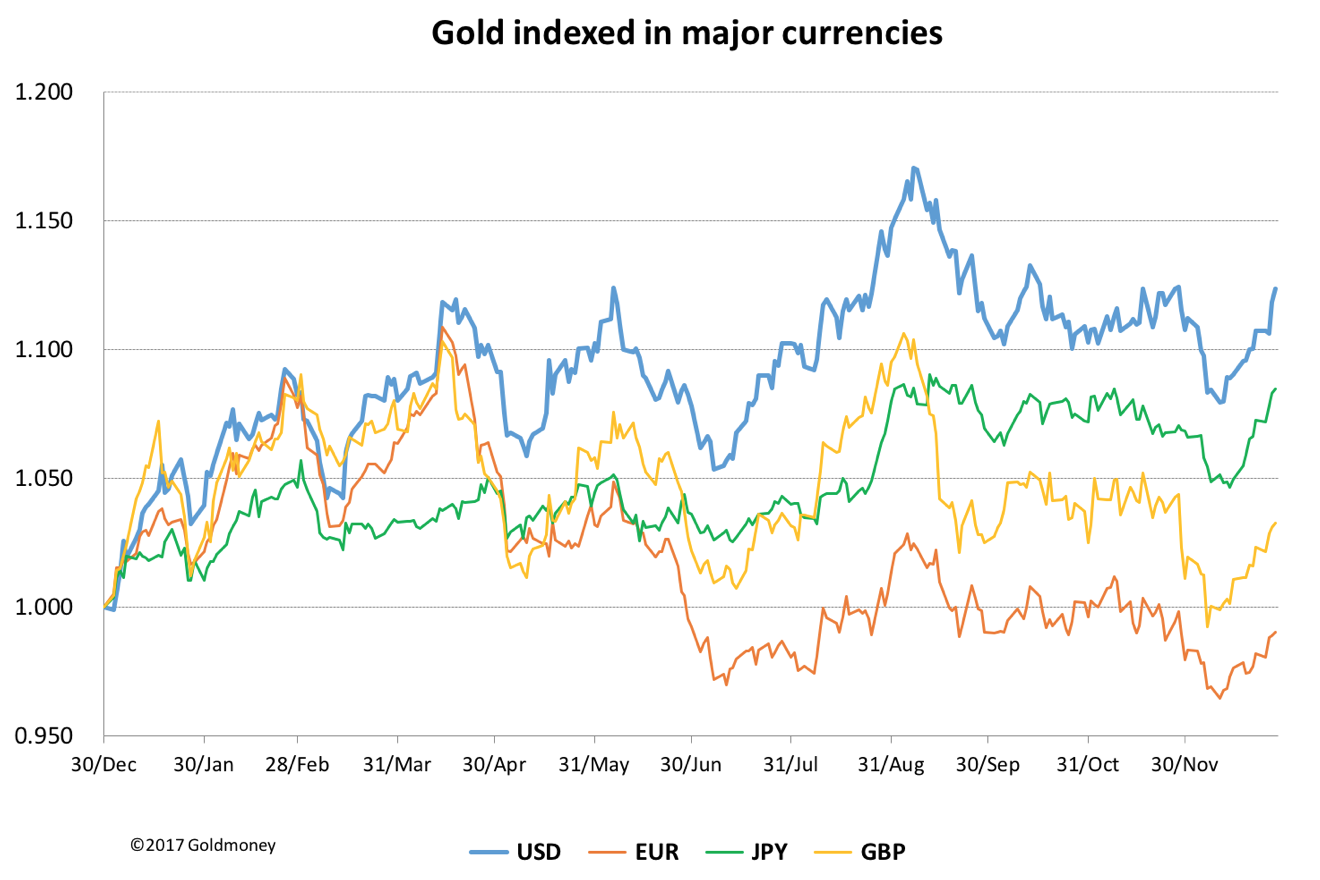 This chart reveals gold having been strongest in dollars, followed by up 8.5% in yen, up 3% in sterling, and down 2.1% in euros. Euro strength has given German buyers, by far the most important category in the Eurozone, an opportunity to continue to accumulate. In other currencies, gold is up 5.6% in yuan and 5.9% in yuan.

Our third chart shows the technical position in dollars. 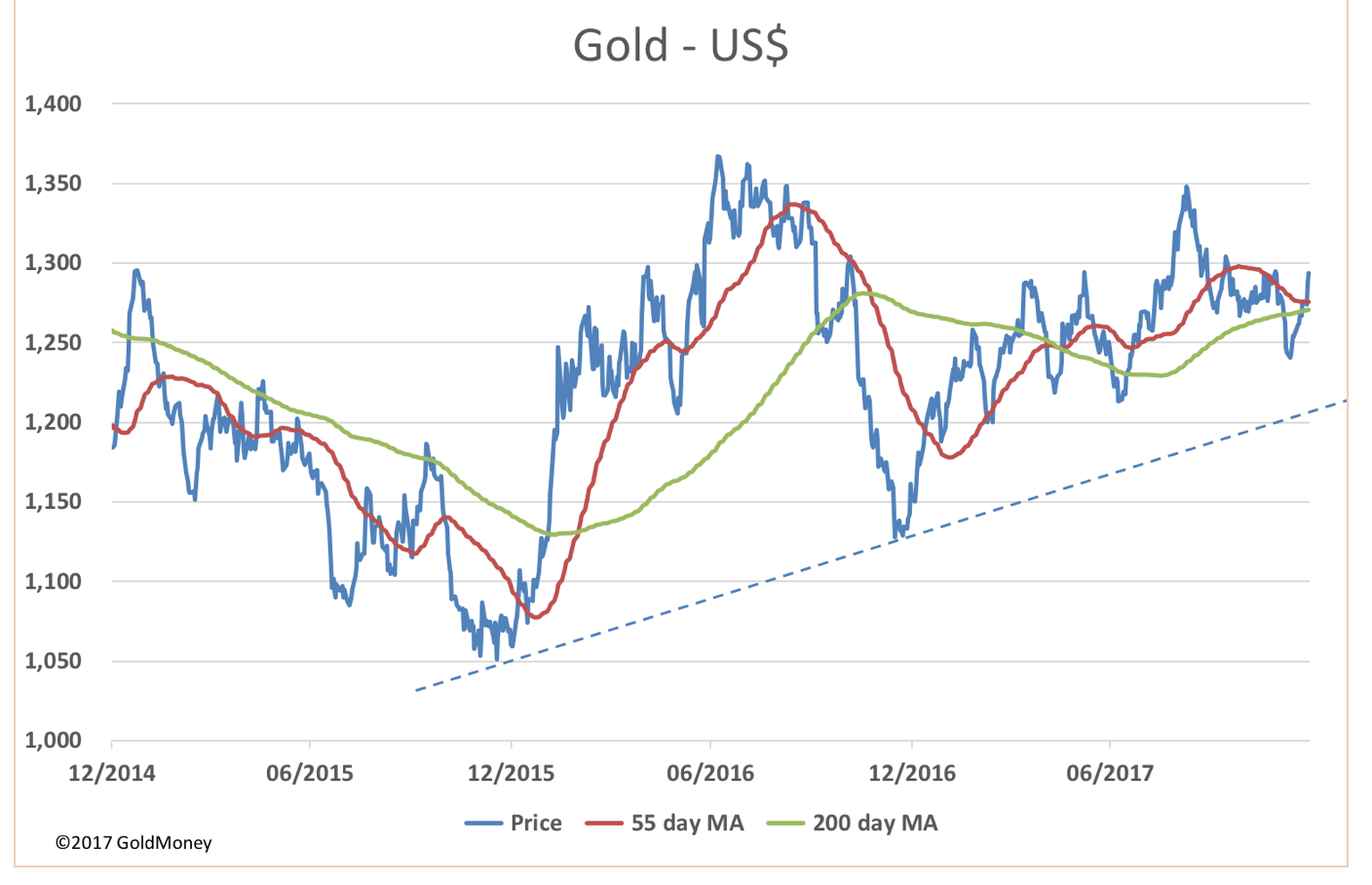 The short-term negatives, of the price below the moving averages and the moving averages moving into a “death cross” appear to have been negated. That said, a run up of some $60 without a pause can be expected to consolidate before a successful break above $1300. However, it is worth noting that the bull trend established from the December 2015 low (the dotted line) is not only intact, but the Q3 sell-off failed to test the trend. On this basis, technicians will expect to see a strong performance in the coming months.

This partly explains the ferocity of the bear squeeze, with the bullion banks trying to protect their positions on Comex, marking up prices instead of freely supplying contracts to speculative bulls. It certainly fits with silver’s performance (as described above). It is less obvious in gold, where net speculative positions are nearly always long. However, the managed money shorts at 28 November jumped by 36,935 contracts by 12 December, which marked the end of the sell-off. So, when we see in very quiet trading conditions yesterday open interest take a sudden jump of 13,562 contracts (preliminary figures), new bulls appear to be forcing the bears’ hands.

Therefore, despite the expected need to consolidate at the $1300 level, there appears to be some good momentum left. Meanwhile, there seems to be a growing acceptance the dollar is likely to weaken in the coming months, as its pre-eminence as the world’s reserve currency is likely to be eroded by China in 2018. It is worth noting that the Governor of the People’s Bank of China had a meeting with the Saudi Finance Minister on Wednesday.[i]

It’s a fair bet they talked about oil trade settling in yuan, mutual investment opportunities (perhaps including a stake in Aramco) and other related matters such as currency hedging facilities. It was a meeting that could have rung the death knell of the petrodollar, and may get some public airing in the coming weeks.