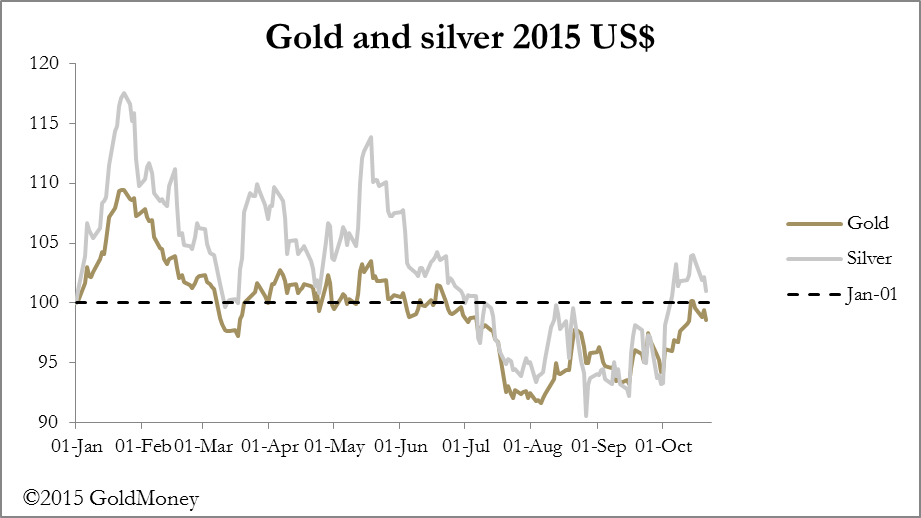 After a strong performance in recent weeks precious metal prices took a breather this week, consolidating by ticking back from the peaks on 15 October of $1190 for gold and $16.30 for silver, to close last night at $1166 and $15.85 respectively.

In early European trade this morning precious metals were firmer, with gold at $1173 and silver $16.00.

This week it was "risk off", with equities rallying strongly, side-lining gold. Oil was noticeably weak as well, not helping precious metals. Given these negative factors, they have held up remarkably well.

The consistently oversold position on Comex for both metals has substantially corrected in the face of some new buying by hedge funds. The next chart shows how the net position for gold has improved from a highly unusual net short position to net long of 77,213 contracts. 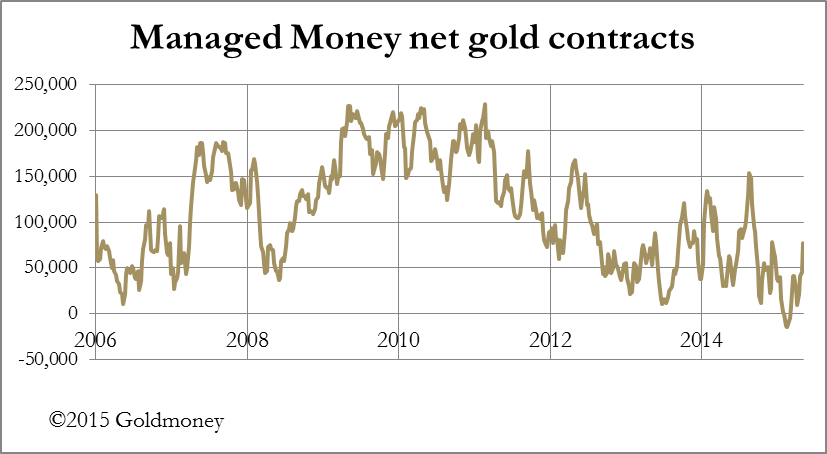 The other side is taken by bullion banks, and is reflected by a growing short position for swap dealers, mainly foreign bullion banks. Open Interest has steadily increased as well, reflecting new speculative longs being opened more rapidly than sour shorts being closed. This is shown in the next chart. 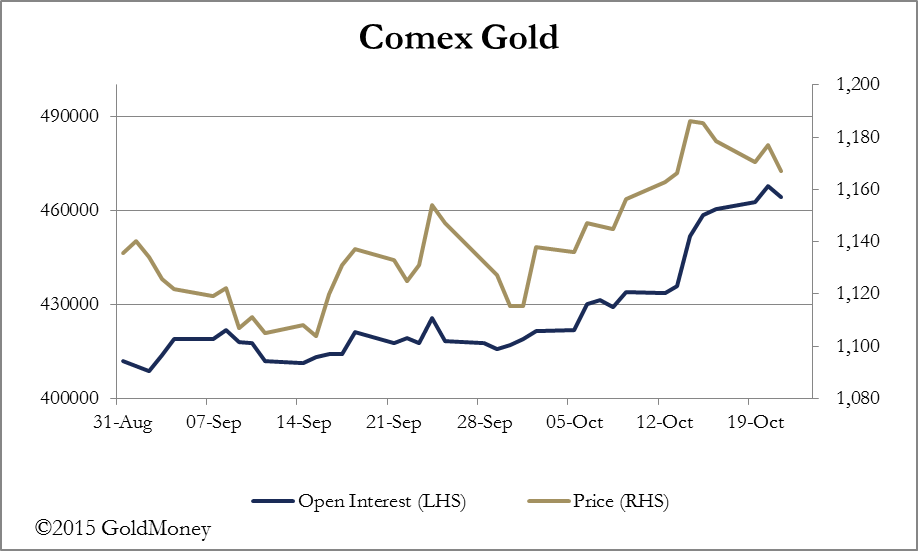 In last Friday's market report I stated that bulls would have to overcome attempts to mark down prices by banks and swap dealers to trigger stops. There was some evidence of that this week, but the real battle has yet to really start.

There is a line drawn in the sand on this issue. At the LBMA conference in Vienna this week, analysts' consensus was for lower gold prices, with some major houses even talking gold down as far as $900 (BNP Paribas - 2017 average). This suggests that they are prepared to ride short positions, though they will obviously trade round them. Given that their shorts are not excessive at the moment, there is unlikely to be a concerted effort to move prices lower – yet.

The danger to the bullion banks is either their shorts become worryingly large from here, or alternatively they change their mind about the bearish outlook. They are still assuming that US interest rates will rise, even though the rise has been deferred. The risk for them is if the rise appears increasingly unlikely, and if there is talk of negative rates. For what it's worth, the signals from bond markets do not suggest rising interest rates any time soon; and yesterday the euro fell 2c against the dollar when the ECB chairman raised the prospect of extended quantitative easing.

Negative rates would obviously make physical gold and silver very attractive, and the trouble this would create for bullion banks, which are both short in futures and running unallocated accounts, is immense. It is too early to seriously entertain this possibility, but it is notable that Goldman Sachs is on the turn. Yesterday, their analyst wrote:
"While our base case remains for higher US real rates and lower gold prices, there are significant risks that our forecast for gold price weakness is pushed out...."
This is called hedging one's bets. But it is important, and suggests that Goldman actually senses a better outcome for gold. In which case, there is a reasonable possibility the other mainstream bears will turn as well.