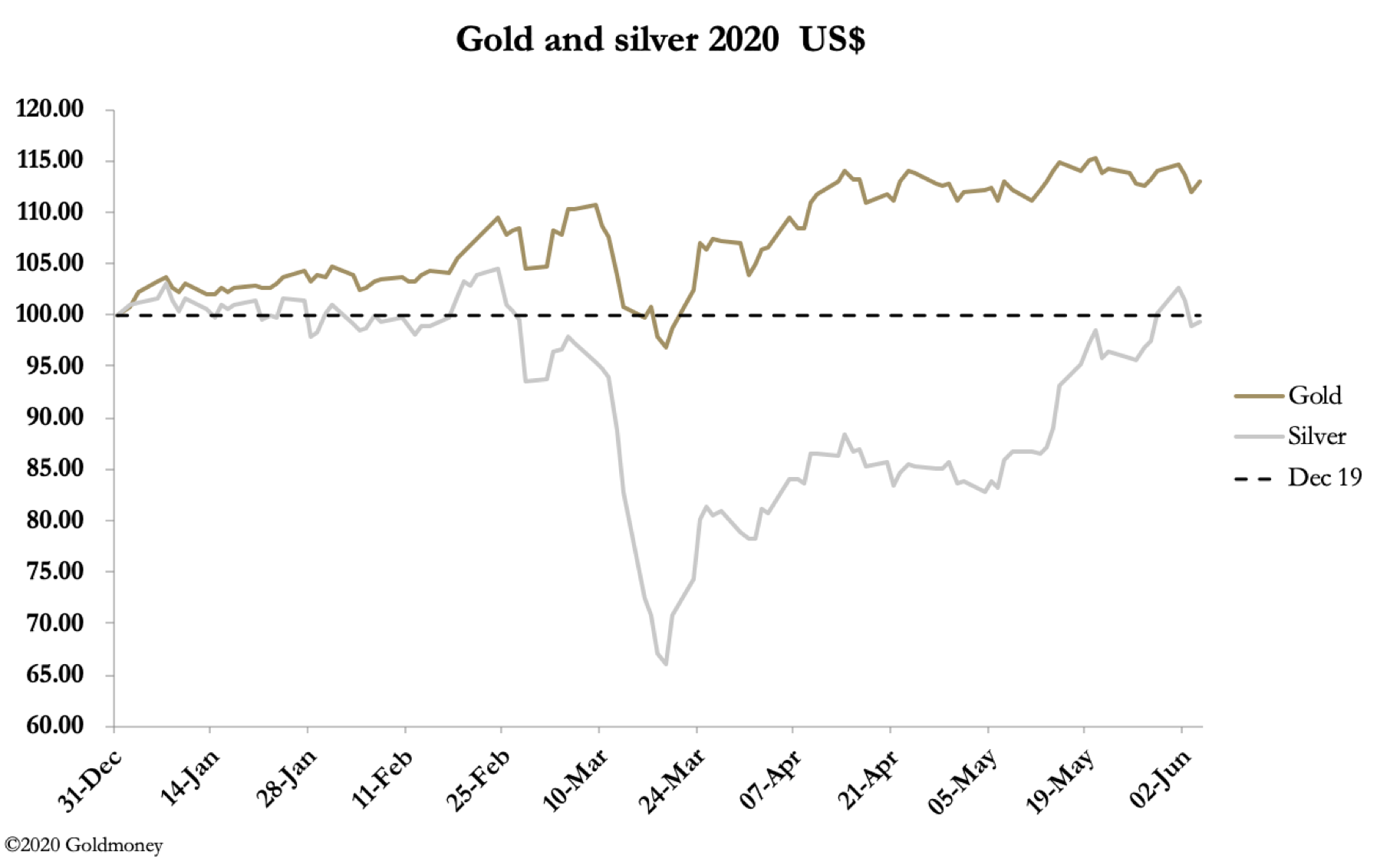 Gold and silver suffered small losses on the week in subdued trading. In European trade this morning gold was at $1707, down $22 from last Friday’s close, and silver at $17.68, down 18 cents.

Gold has been trading sideways since spot first hit $1750 in mid-April. The hiatus that led to $50+ premiums to spot on Comex has diminished but is not over. The feeling is one of tension, best shown in our second chart, of open interest and the gold price.

When open interest rose to just under 800,000 contracts in mid-January, we were becoming aware of the seriousness of COVID-19 and the likely consequences. Swap dealers (bullion bank trading desks) were record short at that time, facing enormous losses on their positions. The bullishness of the speculators was reflected in the gap that had opened up from last September between open interest and the gold price, shown in the chart.

Something had to be done, and there is little doubt there was a concerted action to reduce open interest. The initial reduction to 650,000 contracts did not dent the price until a second hit took open interest down to 550,000. That second wave temporarily took the gold price down to $1470 on 19 March. Open interest continued to fall, but the gold price recovered sharply to higher highs in mid-April.

Note the massive gap on the chart between open interest and the gold price today. Following expiry of the June contract open interest is now at the lowest it has been this year and the price is refusing to decline with it. In other words, attempts by the bullion banks to push the price lower are failing and the best they can hope for is to contain their losses.

That is getting difficult. By keeping up selling pressure the swaps are not managing to close their net shorts, which on 26 May at 182,864 is only 25,815 less than their net position at the peak of open interest on 14 January. In other words, with open interest down 40%, the swaps have only reduced their net exposure by 12.4%.

Clearly, the bullion banking establishment has failed to regain control over the futures markets. We were told that the premiums on Comex were due to supply dislocations, with plenty of gold in London but no ability to transport it to New York. That is no longer true (if it ever was), and still the establishment is in a bind. Shipments into New York are now flowing in abundance, and this week 45,259 June contracts stood for delivery, amounting to 140.8 tonnes of gold.

This tells the true story: American money managers, other reported and non-reportable categories are using Comex to take physical delivery.

In February, gold held in London vaults stood at 8,443 tonnes, of which 5,483 tonnes were at the Bank of England, leaving seven vaults with 2,960 tonnes. Gold ETFs, the vast majority storing in London, totalled 3,033 tonnes at that time, so it’s hardly surprising that 46 tonnes of SPDR Gold Shares bullion is at the Bank of England. And since then, ETF gold has increased a further 476 tonnes.

Outside the Bank of England and with gold lease rates negative, there is no supply in London: not a good time to be short.