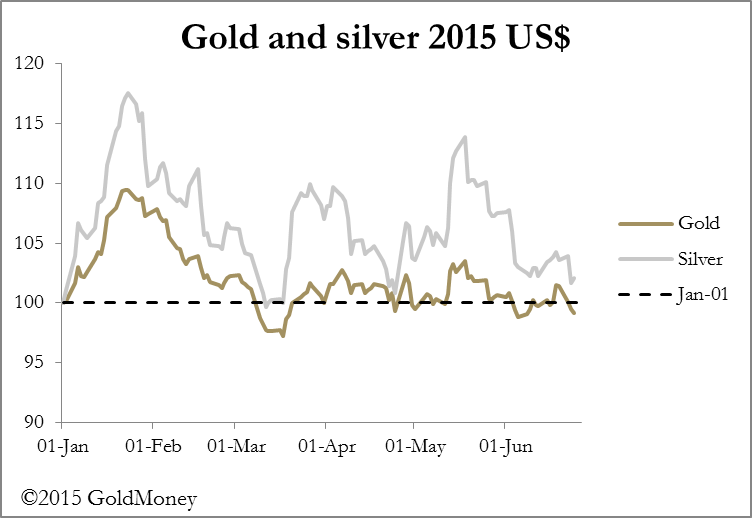 Hedge funds and high-frequency traders have finally forced gold into a US dollar loss this year as shown in our introductory chart, but silver is still in positive territory.

As I wrote last week, in the run-up to the half-year precious metals' prices face a conflict between window-dressing for the lowest possible valuation, and the systemic risk that is Greece. The window-dressing motive is still there, but the pressures from Greece lessened on Monday when everyone thought a deal had been agreed, leading to a relief rally in equity markets and a corresponding fall in gold. As the week progressed it became clear that the proposed deal was not acceptable to the troika* of the IMF, ECB and the European Commission, but precious metals continued to drift lower.

Understandably, the troika observed that the Greek government's proposals were harmful to the economy and ultimately will make her debt less secure. The lack of resolution therefore increases Greece's systemic risk, making precious metals more attractive as a hedge.

But not for now it seems. Monday's false hopes of a Greek resolution allowed the bears on Comex to drive gold and silver prices lower, which suits both commercial traders and money managers. The position however has become extreme, with money managers' short positions the highest they have ever been. This is shown in the next chart, which is updated to 16th June (the dotted line is the long-term average for reference). 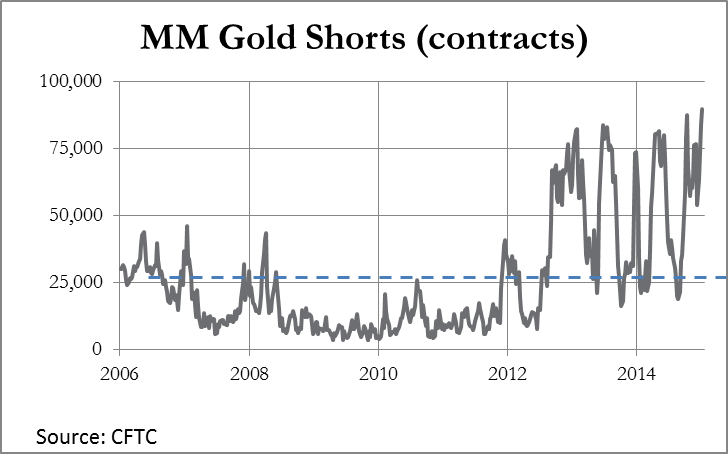 In the last ten days Open Interest has risen by an extra 21,000 contracts, which suggests that Managed Money shorts are even further into record territory, as much as 100,000 contracts. At the same time, Managed Money long positions are only a little below average, suggesting some hedge funds do have an eye on systemic risk.

The extreme short position is therefore controversial with a minority in the investment community. Monitoring sentiment generally, we find a growing influential minority of big investors expressing serious concerns over the failure of monetary policy and the distortion on market valuations. These sentiments appear to be reflected in speculative hedges in precious metals on Comex. The preponderance of sellers has given the big four commercial traders an opportunity to reduce their shorts to a level book, which is significant given their historical net short position has averaged over 90,000 contracts. Swaps, mainly representing bullion banks hedging risk elsewhere, have also reduced their exposure to historically low levels.

Market sentiment is therefore telling us the shorts are like lambs, which as they put on weight are getting closer to their appointment with destiny. The potential for a bear squeeze against money managers short of gold futures is greater than it has ever been. Market insiders, whose greatest risk is always from sharply rising prices, have squared their books telling us that they see this risk as well.

Meanwhile Open Interest in silver is not only at an all-time record, but continues to rise on falling prices, which is our last chart. 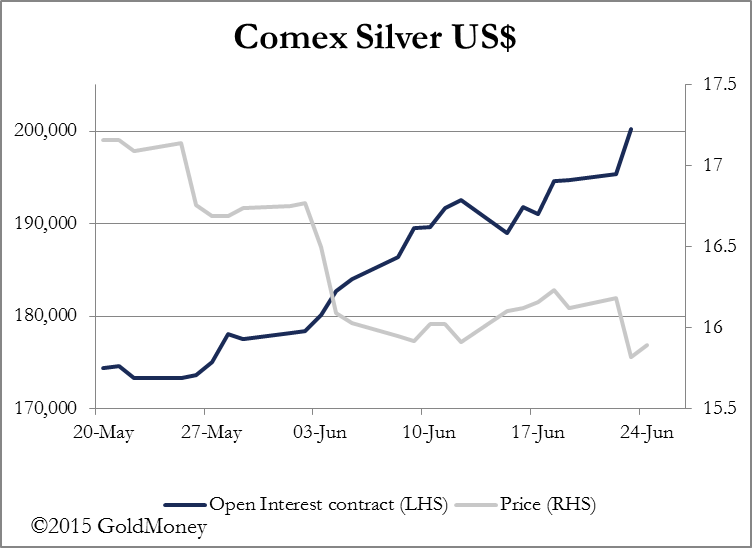 This is very unusual. Normally, Open Interest rises in phase with the price; instead it is rising on a falling price. In this case, Commercials including Swap Dealers have cut their net shorts by betting against new Managed Money short positions. The result is that outstanding bets in this market now exceed a billion ounces, not only a new record by far, but 115% of annual global mine production.

* The term Troika, which comes from the Russian meaning 'group of three', is used to describe the European Commission, International Monetary Fund and European Central Bank