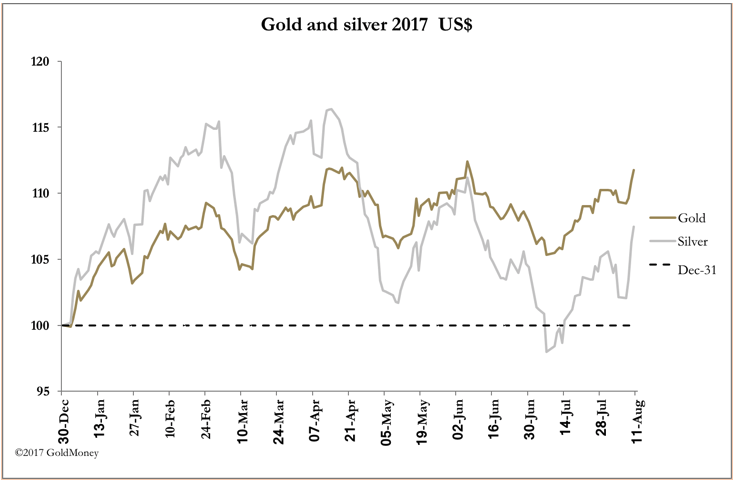 Gold and silver stormed through minor overhead supply this week, to mount an attack on the June highs at $1296 and $17.70 respectively. From last Friday’s close, gold rose from $1259 to $1285 in early European dealing this morning, having hit a peak in Asian markets last night of $1289. This was within $6 of breaking above the June high. Silver has some way to go, with the price this morning at $17.05, still 65 cents below its June high.

Silver is repeating gold’s action in its run-up to the August Comex contract expiry, when unusually the closing of short positions, evidenced by the fall in open interest, drove the price higher. Regular readers of this weekly report will know that at contract expiry, the price usually falls, as hedge fund managers are nearly always net long, and vulnerable to having their stops taken out by the bullion banks. In silver’s case, the active contract is September, so the same situation to that of gold last month, applies. The effect is illustrated in our next chart, of silver’s open interest and the price.

Note how from the end of July, open interest has fallen, while the price has risen. This is evidence of the bear squeeze in silver predicted in my report dated July 21. However, the driving force, hedge fund shorts, has substantially corrected the extreme bear position at that time, so this effect should begin to subside.

This fits in with the technical charts reasonably well. The first rise in gold and silver from early July was on short-covering. After a small consolidation, the bulls began to take over. The next chart shows the technical position likely to guide the bulls from here. 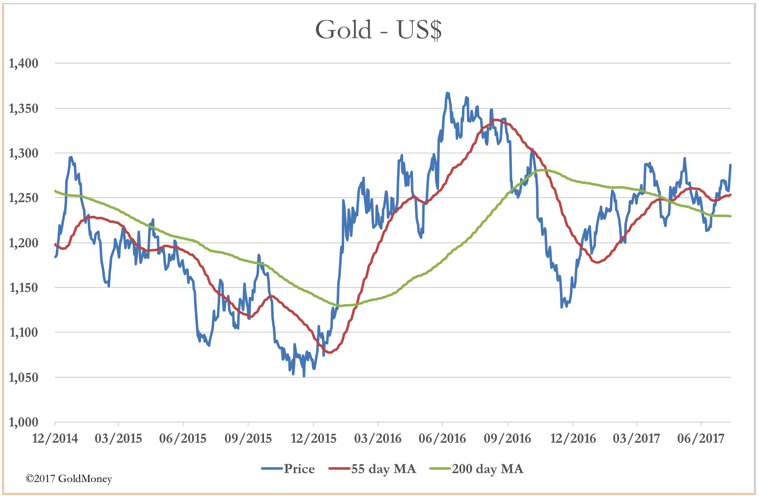 The price and moving averages are now aligned in bullish sequence, and the 200-day MA has slowed its descent, and is finally turning positive. The consolidation from mid-April has built a reasonable base for gold to challenge the $1300 level, and beyond.

There’s good reason for optimism. The dollar has been very weak in recent months, taking gold lower with it against the other major currencies. The next chart shows the extent of this effect.

By far and away the best performer in terms of price is gold expressed in USD (the blue line), leaving the gold price in euros the worst (the red line), which is now barely unchanged on the year. This makes gold good value for Europeans at a time of increasing geopolitical risk.

That risk escalated this week, with the US and North Korea edging towards conflict, which could become nuclear, if the information fed by the media is to be believed. From barely being able to launch a missile that will travel much beyond the Sea of Japan, we are now told that in a few months they have progressed to a miniaturised nuclear warhead that can be delivered by hitherto unreliable missiles. If so, the technical advancement of this failed state is truly staggering.

We must hope that this is not another trumped-up story (no pun intended) of weapons of mass destruction, that became the excuse for the war against Iraq. While there is an ebb and flow of news on this subject, it is reasonable to assume the brinkmanship with respect to North Korea has some way to run, which should tend to support precious metal prices.